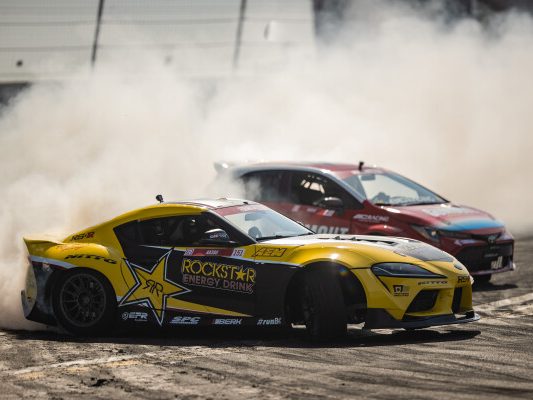 “In Formula Drift, we’re up against the best of the best, and to come out on top with a new car like that is only possible with the best tools of the trade,” said Aasbo. “I can say I had that — 110%”

Tuerck, meanwhile, worked his way through the competition ladder on Saturday in the Gumout / Nitto Tire / Mobile1 Toyota Corolla Hatchback, ultimately lining up against his teammate for an all-Toyota Final.
“I am feeling so comfortable in this new-to-me Corolla Hatchback,” said Tuerck. “I can say hands-down that it’s the best car I’ve ever competed in. It’s phenomenal. I’m so happy to be behind the wheel of that car and with the team that surrounds that car.”

Tuerck’s teammate Aasbo found himself watching from the grandstands after the Round of 16 when judges ruled him at fault for contact when rival Matt Field swung wide at the start. It was an unusual call but drivers had earlier been advised to leave room for their competitors in the initiation zone.

Aasbo said “I don’t drive to hold back. I want to give it everything I’ve got and that means chasing as close as I can from the get-go,” said Aasbo. “That’s what the fans come to see, but it doesn’t always pay off when you gamble, and, for the championship, that’s a note we’re taking.”

Fans got their first look at the powerhouse duo in April as the covers came off the team cars for the first time. But a delayed start to the season due to the global pandemic meant this weekend marked the first time teammates Aasbo and Tuerck competed together under the same tent.

“It was a very positive weekend with a lot of optimism for the rounds moving forward,” said Papadakis. “Our main focus with the new Toyota GR Supra was making it through the weekend; to bring home a win was beyond our expectations. And with double podiums, Ryan has shown that he’s a championship contender in his new car.”

Tuerck is a leading social influencer and top-tier driver with a career of 14 podiums. His down-home charm, commitment to the sport’s grassroots, and talent in front of the camera have brought him a social fanbase of over a million followers. Earlier this year, he retired his previous chassis, a powerful Toyota 86.

The St. Louis Formula Drift opener marked the competition debut of the powerhouse duo of Fredric Aasbo and Ryan Tuerck driving together for Papadakis Racing.