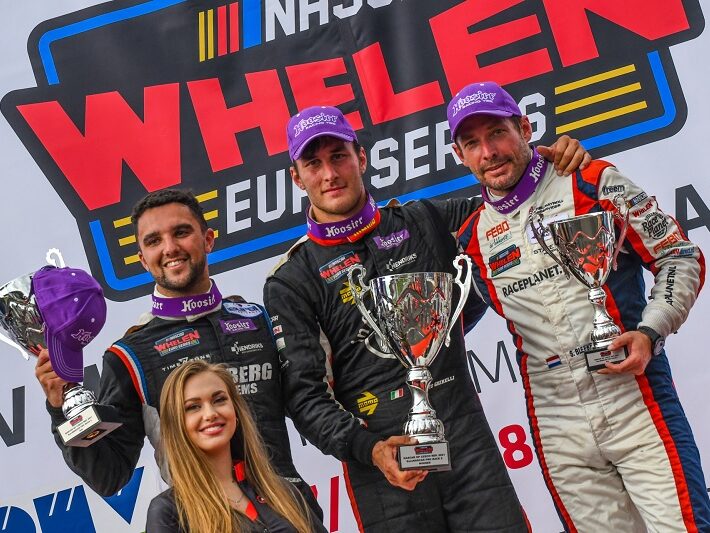 Ghirelli survived a wild start and tried to pull away from the pack, but Sebastiaan Bleekemolen put plenty of pressure on the Fasano native. Ghirelli had a very strong pace and also took advantage of the battle for second between Bleekemolen and points leader Loris Hezemans. While the #50 Mustang pulled away at the front, Hezemans took second ahead of Bleekemolen, who scored his third podium of the season.

“It was a fantastic win”, said Ghirelli in Victory Lane. “We led every single lap and I got into a good rhythm. We were able to control the race and manage the gap. What can I say? The Hendriks team did an amazing job. The championship battle is on and we keep believing and keep pushing.”

Ghirelli’s teammate Hezemans made the decisive move on Bleekemolen on lap 11. The Dutchman not only took second place but also retained the Championship lead. In the closing laps, Bleekemolen defended his place on the podium from a charging Jacques Villeneuve, who simply ran out of laps to chase down the driver of the #69 Ford Mustang. The former Formula One Champion settled for fourth scoring a solid top-5 result for Academy Motorsport / Alex Caffi Motorsport.

On lap 15, Lucas Lasserre got past Giorgio Maggi to round out the top-5 of an action-packed race at the 4.1 kilometers long home of the NASCAR GP Czech Republic. With his sixth place under the checkered flag, Maggi grabbed the win in the Junior Trophy for drivers aged 25 and under. NWES veteran Frederic Gabillon followed in seventh ahead of his RDV Competition teammate Ulysse Delsaux, who was also second in the Junior Trophy classification.

DF1 Racing’s Henri Tuomaala from Finland ended up ninth and that put him in first position of the Challenger Trophy standings for bronze and silver drivers in EuroNASCAR PRO. He was joined on the podium by Michaela Dorcikova and Yevgen Sokolovskiy. It was Tuomaala’s teammate Nicolo Rocca, who completed the overall top-10.

Drama struck in the very first corner of the EuroNASCAR PRO race, when Francesco Sini’s Solaris Motorsport’s Chevrolet Camaro was catapulted in the air after an contact in the middle of the pack. Due to the crash several drivers suffered damage to their cars. The safety car was deployed and racing then resumed on lap 4.

On lap 6, Alon Day faced technical problems to his #88 Chevrolet Camaro of CAAL Racing. It was a heartbreaking moment when Saturday’s race winner had to lift and coast down the pits. The CAAL Racing mechanics opened the hood, while the Israeli climbed out of his race car. It was another DNF for Day in the 2021 NWES season.

After the NASCAR GP Czech Republic, Hezemans leads the Championship by 18 points on his teammate Ghirelli. Gianmarco Ercoli, who ended up twelfth, sits in third with a 24-point gap. Rocca is fourth ahead of Bleekemolen, Gabillon and Day.

The NASCAR Whelen Euro Series will be back in three weeks time – on September 18-19 – for the NASCAR GP Croatia at the Automotodrom Grobnik close to Rijeka. Qualifying and all races will be broadcasted live on all EuroNASCAR platforms – YouTube, NWES App, Facebook, Twitch – and Motorsport.tv.