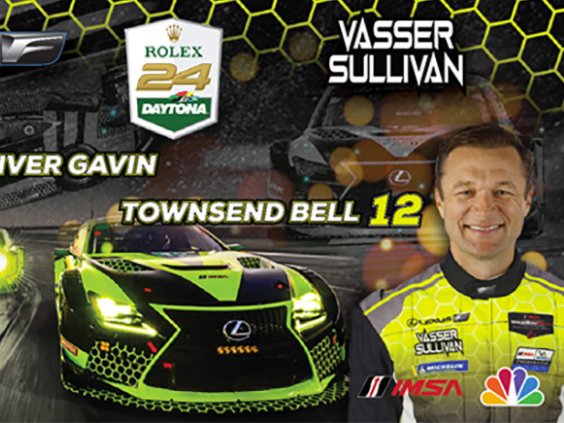 Daytona Beach, Florida. – Vasser Sullivan Racing has bolstered its two-car Rolex 24 At Daytona lineup with a pair of past winners in the iconic race that starts the IMSA WeatherTech SportsCar Championship season.

The team announced Tuesday that long-time Corvette Racing standout Oliver Gavin will co-drive the No. 14 Lexus RC F GT3 with full-season drivers Jack Hawksworth and Aaron Telitz. Meanwhile, Townsend Bell returns in the No. 12 Lexus for the Rolex 24, where he will pair with season-long pilots Frankie Montecalvo and Zach Veach.

Among the multitude of accolades for Gavin in his 21-year IMSA career are 49 race wins, five season championships, five victories at the 24 Hours of Le Mans and the 2016 GT Le Mans (GTLM) class victory in the Rolex 24.

“I’m quite pumped to be joining Vasser Sullivan for the Daytona Rolex 24, and I’m excited to compete in the GTD (GT Daytona) class taking on the challenge of trying to win another Rolex,” Gavin said. “I’m joining a great driver lineup with Jack and Aaron in the No. 14 Lexus RC F GT3 and will be looking for my 50th win in IMSA; I can’t wait to get started!”

Bell was the GTD winner at the Rolex 24 in 2014, was the WeatherTech Championship GTD champion the following year and winner at the 2016 24 Hours of Le Mans in the GTE Am class. The Californian was a full-time driver in the No. 12 Lexus the past two seasons, collecting a win last year at Road America with Montecalvo.

“I’m very happy to be competing for the Vasser Sullivan Lexus family in the 2021 Rolex 24 At Daytona,” Bell said. “We’ve had a lot of success there, including finishing first and second last year in the Daytona sprint race (in July) and placing second in the team’s debut at the Rolex 24 in 2019. We are all committed to continuing and building on that success, and I am looking forward to driving again with Frankie and working with Zach Veach as he transitions to sports cars.”

Vasser Sullivan Racing, owned by Jimmy Vasser and James “Sulli” Sullivan, said it would announce additional drivers for each car at a later date. Supplementing the lineup with the likes of Gavin and Bell provides a dose of seasoned veterans to go with the younger full-season quartet.

“Both are extremely experienced, veterans of sports car racing and the Rolex 24 and have shown they are winners,” the team said in a statement. “We look forward to their contributions to the team as we pursue a win in the GTD class in this prestigious and historic race.”