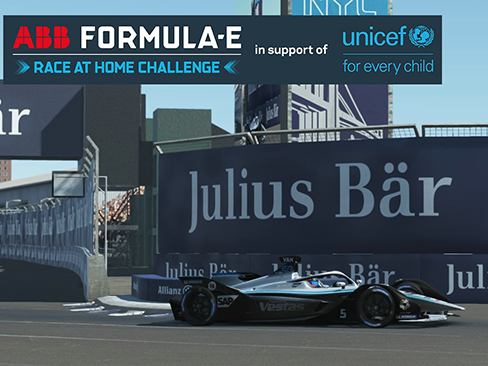 Rally driver and professional stunt driver Verena Mei joined the Challenge Grid for today’s race, as part of unique preparations ahead of getting married tomorrow.

Mei has previously competed in Formula Drift, Time Attack and is a Rally America class champion. Over the past 14 years, she has worked with many manufacturers as a professional driver and performance driving instructor.

“Having the Race at Home Challenge, I feel like it really brings people together. Being able to participate or watch the Formula E drivers go head-to-head at something they are not actually used to.

“A lot of people think it is an easy transition, going from a real-life race car and getting behind the wheel of a sim. But it is actually harder than I thought. I love to drive by the seat of my pants, so I feel how the car moves with me, feeling the weight transfer and when I get in a sim I mainly have to rely on the visual feedback.

“I am especially excited because this is a charity race for a good cause to raise funds for UNICEF. Actually, when I was in high school, I used to trick or treat in support of UNICEF!”