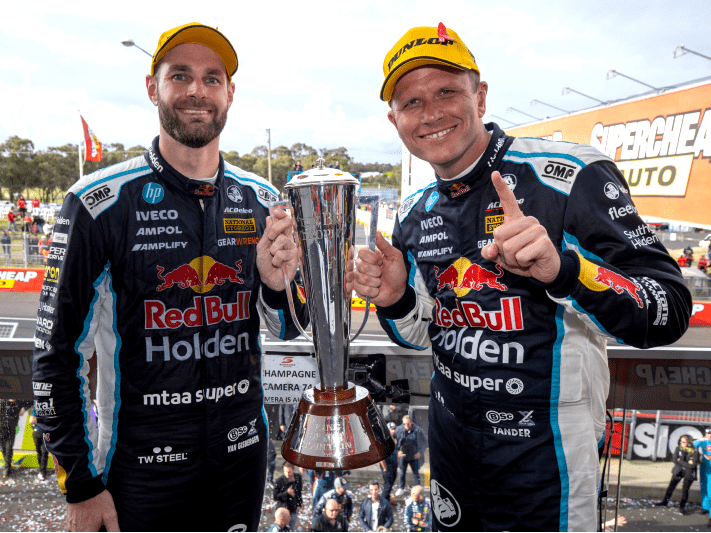 Jamie Whincup – Car #888. “I’m rapt for the team – massive day, particularly for the 97 crew. They made it happen, Shane made it happen in the middle of the race when he passed cars and got to the lead and then 60 qualifying laps to the end was really impressive to watch. I wish I was part of the battle. The pace they had, I’m pretty sure our car would have had the same so it was disappointing to not be out there cutting laps at that pace like he was. All in all, I’m aware that at Bathurst you win some, you lose some. In hindsight, I wish I would have done it a little bit differently, but Brodie (Kostecki, co-driver car #99) was playing a tough game and it got the better of me. I underestimated the surface temp of the tyres and in a normal situation it would have been fine, but I just turned in with the rears still on fire and oversteered and hit the wall. Thankfully, the car is nowhere near as bad as it looks so we’ll be able to just bolt a couple of wishbones on and it’ll be ready to go in a couple of hours. I’m not sentimental but seeing Shane drive around with the Holden flag out the window made me reflect on all the people who have supported the brand, all the people who’ve worked for Holden, all the fans – there are so many passionate people associated with this Aussie brand. I do hope they were watching that last lap and felt the win as much as we did in the garage.”

Craig Lowndes – Car #888. “The day started off really well. In the warm-up, we were happy with the car and where we got it. We’d been working really hard all weekend to make sure the car was going to be nice for the racing. The start of the race for me was a little entertaining. I got a ripper start and managed to get a couple of places. I had to be a little bit patient following some other drivers but I made the passes eventually as the car was coming to us. I was quite happy and comfortable. The original plan was to do a single stint and then a double, but unfortunately, we didn’t get to my double. It’s one that I think got away because we had a nice car and definitely had the same speed as 97 had. It’s unfortunate, but that’s motor racing and we’ll come back next year fighting harder. To have a win here as a team to close out a chapter of factory Holden backing is sensational.”

Shane van Gisbergen – Car #97. “How unreal is that. The last 60 laps were so intense, and all the safety cars made it really tough, but it was an awesome job all day by Garth and the whole team as well. The car just got better and better throughout the day and the last couple of stints were really cool to drive. I’ve had some bad runs at Bathurst in the past, and it was all about making no mistakes. I made sure I capitalised when it rained – I got to the front and never let go of it. We’ve been the factory team for the last couple of years, and to not have Holden support racing anymore is devastating, but to win the last Bathurst 1000 for them was something pretty special.”

Garth Tander – Car #97. “I can’t believe it – it’s just so surreal, to be honest. 2020 has been such a strange year for me, effectively sitting on the couch for six months waiting for this race, to then go through quarantine and spend so much time away from home to do this one race. To have success here is just amazing, it really is. I can’t thank the team enough. They put so much faith in me with the work that they allow me to do with setting the car up, and Shane as well gives me plenty of opportunities to be part of the team. The car was mint today – I’ve never had such a good race car at Bathurst. It was a real pleasure to drive this car and very special especially given it was Holden’s last factory involvement. To stand on the top step representing Holden in the factory-backed car is pretty cool.”

Roland Dane – Team Owner. “Bathurst, as much as anywhere, is about teamwork and though Garth and Shane went above and beyond in delivering the result today, the team did a great job behind them. They did awesome pit stops that helped create the win as well as what Garth and especially Shane in the second half of the race did to bring it home. A real team effort and a special way to say farewell to the Holden brand in Australia as a new-car brand. To close it off in this way hopefully has some meaning for the fans and Holden ex-employees, ex-dealers and everyone else who have put so much into Holden over the last 70-plus years, especially in 60-plus years of motorsport, so I’m very happy that we’ve played a part in that. We must acknowledge the lengths that the Victorian teams have gone to in keeping racing going. All the people who’ve been away from home for so long and keeping the show on the road, they deserve our thanks, not only from us but also from everyone else in the motorsport community for enabling us to run the championship and hopefully they can now go home and relax.”