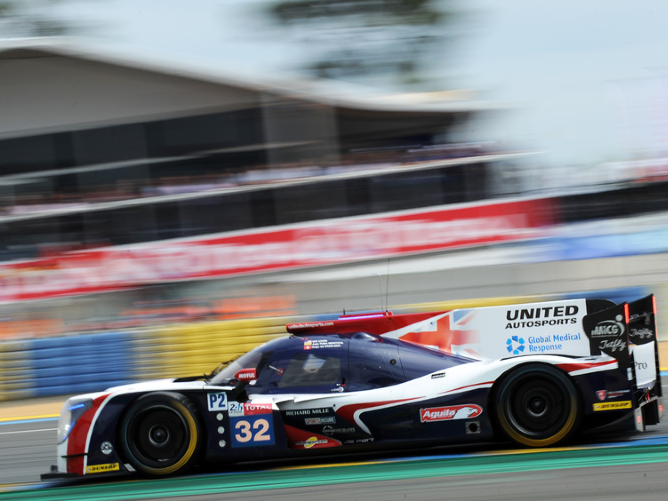 United Autosports have won the 2020 Le Mans 24 Hours, after the #22 crew of Phil Hanson, Filipe Albuquerque and Paul Di Resta brought their Oreca 07 home in first place after a frantic race, which saw Phil pit the leading Oreca with 10 minutes to go for a splash of fuel, before exiting the pits just in front of the second-placed car, crossing the line first to take the victory.

The #22 crew also started the race on pole position after Paul Di Resta set the fastest time during the inaugural Hyperpole session on September – which was also the fastest ever lap by an LMP2 car around, Le Mans.

This race result for the #22 crew means they also provisionally win the 2019/2020 FIA World Endurance Championship with one round to go after scoring four straight wins, three pole positions and two further podiums throughout the year.

The race was bittersweet, however, as the #32 crew of Alex Brundle, Will Owen and Job van Uitert suffered cruel luck as their Oreca 07 suffered a broken oil pipe at around 6 am, meaning they had to pit for repairs from the lead of the race. Repairs in the garage took just over 45 minutes which ultimately dropped them down from battling for the win to 13th. A small consolation was Job van Uitert scoring the fastest lap of the race on lap 248 as he proved how quick he and his teammates had been during the first half of the race in the #32 car.

“It sounds crazy and it hasn’t really sunk in yet. It feels like such a relief as I thought we had thrown it away in the last 30 minutes with everything kicking off with the safety car and the slow zones, so it’s so rewarding to get it done and to win the championship as well.”

“These are the two goals we set out to achieve at the start of the year and you are never 100% confident that you can achieve them as the grid is so competitive and anything can go wrong at Le Mans, especially in the style we did it in too – pitting right at the end and not knowing if we would make it out in the lead again of if the other car had to pit. It makes it even more of a rewarding feeling. I’m speechless.”

“I’ve got such a long story already with Le Mans. I’ve been close to winning Le Mans before so to achieve it today is incredible. Today, the reason why I was so nervous in the last few hours is that people expected us to win but it was not like that at all. We could have lost it all in the last 10 minutes after leading for so long and it’s not a win until it’s a win. I could see us finishing P2 after Phil had to pit towards the end, which would have felt like a big loss especially because we didn’t know if JOTA had to pit or not but Phil was completely up to the task and he did a brilliant job, everyone at United has done a great job.

“A fourth straight win in the WEC, another pole position and I think we are just continuing to ride the wave of success and why not. In the end, it’s a dream come true to win at Le Mans. I know it’s not overall but I think its more special than in LMP1 as there are 24 cars with fantastic drivers all across the grid so well done to everyone in the team – huge congratulations.”

“It’s pretty cool to be able to say we have won the Le Mans 24 Hours. I think the biggest thing is winning four in a row. You win three in a row and then you come to Le Mans and you’d think your luck would be up, but I think we were hopeful that if we just carried on doing what we had been doing then we would be fine. But to come here on Friday and win Hyperpole, break the lap record and then win, it’s unbelievable.”

“We were a bit sluggish in the race really, we had some issues in the pits but we stayed calm and all I can say is well done to everyone. The crew go through so much. We get the luxury of staying in a motor home and being able to sleep, but they have to sleep on deck chairs in the garage. People don’t know the effort that goes into this race. It’s just nice to get it done. The pressure was on changing to the Oreca but we nailed it!”

“We got off to a good start, getting up to second from fifth which was nice. I made a couple of nice moves on Verne and van der Garde to get up to second and then we were always in a race with the JOTA car, the sister car and the G Drive car, but it looked like we could have won the race in all honesty. All three of us had the pace. It was a normal driver change from me to Job and then I was on my way to the motor home when I heard we had started to have issues. It then went from there. But it’s just one of those things.”

“It was nice fighting with the sister car and G Drive, I think we had good battles and we were definitely competitive. I think even with the pace we showed through the night and even after the problem we had we were definitely in it to win it. But Le Mans is Le Mans. You can do everything right and still it can go wrong.”

“It’s really hard to know what to say about this race today. There’s a lot of positives to take out of it. You get to the 12-hour mark and you think you’ve made it to the night so it’s just the next half to get through and you start to see an opportunity open up an start to wonder if you could have a decent result. We were over halfway in before we had our issue and I think it’s fair to say we would have been there in the end. It sucks. It’s heartbreaking really. We finally had the full package to be able to really fight, which is what we were doing. The #22 had the pace but I’d like to think we would have given them a run for their money. We were leading them by a good margin and then the oil issue happened. It sucks but we’ve got to thank everyone for trying their best.”

“To say that we have won Le Mans is absolutely fantastic. It has been the aim since Richard and I started the team so to now have finally done it is incredible. The team has worked so hard and Phil, Filipe and Paul deserve it. I have to commiserate with Alex, Will and Job though as they were also up there and fighting for the win – I’m not sure who would have won if they had still been in it at the end. They didn’t deserve the bad luck that hit them early this morning.”

“I’m still a bit speechless really. It’s all feeling very surreal at the moment. Huge congratulations to every single member of the team, they have done a fantastic job. The three drivers worked so hard and were pushing for the full 24 hours. And I don’t know what to say about #32, they were on the same level of pace as the #22 and they would definitely have been at the sharp end come the final hour, but Le Mans can be cruel and we have seen that today with Will, Alex and Job.” – Ends –

United Autosports is one of the fastest-growing motorsport teams in Europe and competes globally in numerous sports-prototype categories worldwide. Based in Leeds, West Yorkshire, UK, the team is co-owned by McLaren CEO Zak Brown and former racing driver Richard Dean.

The team was formed in 2010 and initially contested a prestigious GT championship in Europe. After being a front-running British GT Championship team for four years, they have since branched out into racing sports prototypes globally. They are multiple race and championship winners having won the 2016 and 2017 European Le Mans Series LMP3 Championships as well as the 2018/2019 Asian Le Mans Series LMP2 Championship. Their success extends to finishing on the Le Mans 24 Hours podium in 2018 in only their second attempt at the French endurance classic.

RPMX delivers the latest news and driver profiles from some of the most popular auto racing series. RPMX includes a number of easy to use tools that allow drivers, teams and organisers to create and publish their own profiles, team news and event info. To start publishing your content on RPMX.info be sure to register at www.rpmx.info