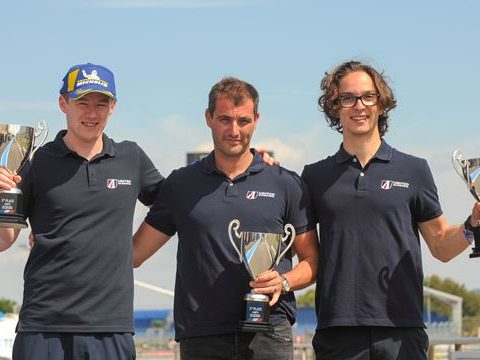 United Autosports scored three podium finishes at Paul Ricard after both their LMP2 cars and one of their LMP3 cars finished in the top three of their respective classes during round three of the European Le Mans Series.
The #22 Oreca 07 of Phil Hanson, Jonathan Aberdein and Tom Gamble finished second, crossing the line just six seconds behind the eventual winners. The #32 crew of Job van Uitert, Manuel Maldonado and Nico Jamin finished third after starting the race in seventh.
The #2 Ligier JS P320 of Wayne Boyd, Edouard Cauhaupe and Rob Wheldon finished third after a brilliant strategy call from the pit wall brought them back into contention. The #3 Ligier of Jim McGuire, Andrew Bentley and Duncan Tappy had a good start, running as high as third, but lost out after contact with some bollards later in the race caused damage that required a lengthy pit stop for repairs.
United Autosports LMP3 podium follows on from the team’s success in the Michelin Le Mans Cup yesterday, where John Schauerman and Wayne Boyd finished third for the second time this season, leaving the pair joint championship leaders heading into round three.
The team turn their attention to the second round of the FIA World Endurance Championship at Portimao, Portugal 11-13 June. The ELMS and Michelin Le Mans Cup teams will be back in action at Monza, Italy on 9-11 July.

“It’s great to see our drivers back on the podium where they belong. We are still aiming for that top step once again, but I have no doubt it will come. The team are working very hard and they deserve to be rewarded.”
“We could have had cars on the top step of the podium. I think the safety car cost our LMP3 #2 car a win. Unfortunately, we had to do a service under a safety car and got stuck at the end of the pitlane. Overall, a good race and to have both LMP2 cars on the podium is good, so congratulations to them and it’s nice to be back being competitive and where we should be.”
The #22 Oreca 07 lined up in third after a brilliant qualifying by Phil Hanson the day before. Phil got a good start but was pushed wide on the start by the pole sitter, which dropped him down to fifth. It wasn’t long before he started to work his way back through the field running in third once again for the first part of the race. Manuel Maldonado started the #32 Oreca for the first time and had a great opening couple of stints, battling with more experienced drivers both ahead and behind him, before handing the car over to Nico in fifth.
Phil handed the #22 over to Jonathan Aberdein, who pitted 15 minutes into his first stint with a suspected puncture. The team took the opportunity to top up the fuel and check the car over, before sending Jonathan back out on track. Unfortunately, this had dropped the #22 down to 11th. Jonathan battled his way back through the field, before handing the car over to Tom Gamble, who drove brilliantly, picking off drivers ahead to be leading ahead of the final pit stops.
Nico Jamin also drove brilliantly, taking the car over in fifth and handing the car over to Job van Uitert in the lead of the race. Unfortunately, Job was struggling with damage to the front end of the Oreca, having picked up some debris from an LMP3 car. The debris was removed at the final stop and Job crossed the line in third, just 17 seconds behind Tom, who crossed the line in second.

Phil Hanson
“The race definitely went in our favour. We came second in this race because of strategy. I think our pace was good enough all weekend but wasn’t a stand out like it had been at Red Bull Ring. A good job from the team all around. It was a shame I got hit off the track on the inside at the start and lost those positions because that compromised my stint. Ultimately, me getting out of the car early and getting Jonathan in the car with four new tyres was the key to our strategy that gave us the opportunity to finish second. To have come from seventh to second is great, and we have closed the gap to the championship leaders as well which is brilliant, as we are only half way through the season so there is everything still to fight for.”

Tom Gamble
“It was a really good race. We had a difficult first half of the race, things weren’t really going our way. I then had a really good stint in the race and felt really good in the car. Credit to United for giving me an amazing car as always. In hindsight, a few little things could have changed that could have made the difference to get the win but it’s still a great result. Thank you to United and my sponsors, R&D Advisors for all their help.”

Jonathan Aberdein
“Overall it was a good race. A few things didn’t go our way so disappointed to miss out on the win. I think it was a great stint by Tom, so all the credit goes to him for our second place finish.”

Job van Uitert
“It’s good to be on the podium. Second and third for United is a decent place for us. I think there was a bit more in it in the end. Some debris from a P3 car damaged my race and pace, but the pace from G-Drive was pretty fast so taking that into consideration it was a good recovery from Red Bull Ring and Barcelona so I’m happy with that.”

Nico Jamin
“Manuel had a good start and I did a good first two stints after getting the car around P5. The car felt good and I was able to drive it well and handover the car to Job in P1. Hitting the debris in Job’s stint was unfortunate but in the end it was a good result and effort from the entire team. After recovering from two difficult races, to get a podium I hope we can keep that streak going.”
Manuel Maldonado
“It’s good to finally get a podium. I think the race was pretty clean. We lost a bit of time but at the end of the day it was a good result for everyone. We can work from here for the rest of the 2021.”
Rob Wheldon started the #2 Ligier JS P320 from fourth on the grid but was leading heading into the second corner after making one of his usual fantastic starts. Andrew started the #3 in seventh but was up to fourth by the end of the first lap, until he has hit by another car, dropping him to eighth.

Rob managed to stretch out a 36-second lead ahead of the first round of pit stops but was caught out by a safety car before he made it into the pits so could only pit for an emergency five-second fuel stop. He was then held at pit exit before he could re-join the track. The #2 crew then had to pit again once the pit lane opened to complete Rob’s pit stop and sent him back out on track, which landed him among the GT field. Rob pushed on and brought the car in to hand over to Edouard after two hours of running.
Andrew Bentley handed the #3 Ligier over to Jim McGuire who ran a trouble-free stint and had very good pace throughout his time in the car. Jim then handed the car over to Duncan Tappy who had to bring the car into the pits for repairs after hitting some bollards after swerving to avoid debris. The team changed the nose and repaired the rear bullet but lots a significant amount of time and eventually crossed the line in 13th.
Edouard drove a great stint in the recovering #2 Ligier to hand the car over to Wayne Boyd who brought the car home in third place after a fantastic strategy call from the pit wall brought them back into contention.

Wayne Boyd
“Happy to be on the podium once again and get a few more points for the championship. It does feel like another one of those days where Rob did a great stint but the safety car came in at a bad time, and we were just really unlucky. However, for us to make it back up to third is a huge credit to the team and strategy that they played, so massive thanks to them. Going forward to the next round in Monza, our pace is really strong so there’s no reason why we can’t win, we just need everything to line up for us.”

Edouard Cauhaupe
“I am happy to be on the podium. We were really fast on track and it’s a great result after the previous two races we’ve had this season. We will do our best to take the victory in the next race.”

Rob Wheldon
“Really chuffed with the start, from P4 to P1 by the exit of turn one. As far as my performance in the car, I felt that I drove well and managed traffic well. The pace felt good when we were in front and we were pulling out with a strong lead. Unfortunately some circumstances out of our control meant we struggled, but we made a great recovery after a good strategy call to end up third on the podium, so great effort from the whole team.”

Jim McGuire
“We all worked really and were hoping for a good result within the top five. Unfortunately we didn’t hit that mark and we’re disappointed on that. The safety car at the end of Andrew’s stint took away a gap we were hoping for. I got in the car and ran at my pace and felt it was fairly decent, we just got some damage to the front splitter after being pushed out wide which didn’t help Duncan’s race stint. The team worked really hard, so great effort by everyone and we’ll come out stronger in Monza.”

Duncan Tappy
“After starting with pretty good pace here, I think us and the #3 AERO crew are a bit disappointed with the result. We didn’t quite have the pace but we’ll go away and come back stronger.”

Andrew Bentley
“In terms of pace, I think it was one of the best races we’ve had from my side of things. I felt pretty comfortable in the car and made good progress after a really good start. I settled into a nice race and at the end it was down to fuel strategy. We had a slight missed opportunity with an FCY but happy with that race overall. I think we’re in good shape ahead of Monza.”