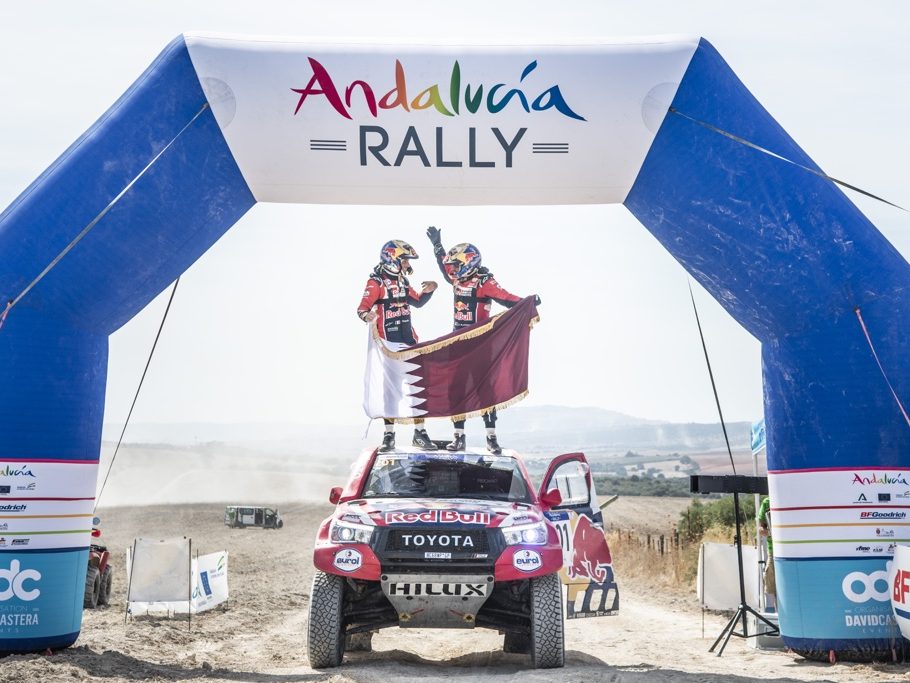 Nasser Al Attiyah (Toyota Gazoo Racing) might have entered the Andalucia Rally to prepare for the next Dakar, but consummate competitor that he is, he also came to win. Job done for the popular driver who adds this first Andalucía Rally 2020 to his already very impressive tally.

Al Attiyah: “I’m so happy to win here. Thank you to Toyota Gazoo Racing, thank you to Overdrive, really this was an amazing race for us. Not easy because everybody coming here to win and show that they are ready for the next Dakar. Thanks to the organization, ODC Events for putting on this rally and also to the region, Andalusia. The landscape is so beautiful.”

If Nasser Al Attiyah entered with high hopes, his rival Carlos Sainz (Mini X-Raid JCW), by his own admission, really wasn’t expecting to achieve much in his ‘unsuitably’ big 2 wheel drive buggy, that he opted to race so as to continue to develop it for the next Dakar.

Sainz: “It was a good decision to come here, even with the 2 wheel drive, to get kilometres in the car. I’m happy with the result. If, before the rally, you asked me if I could take second overall with this car I would reply to you that it would be difficult. Given the time the organisers had to put this race together it was successful and I congratulate everybody involved.”

Despite the disappointment of going out of contention for victory after a 10 minute time penalty, Yazeed Al Rajhi (Overdrive) was happy with his pace on the rally and even happier to be once again reunited with his co-driver Dirk Von Zitzewitz. Al Rajhi: “For sure I’m very happy. We enjoyed it and Dirk did a great job. It is very tricky driving here but we reached our target of having a good rhythm and good speed. Now we have training to get ready for January.”

In the SSV T4 class it is Aron Domzala (Monster Energy Can Am) ahead of his teammate Gerard Farrés with the Portuguese driver Rui Carneiro (MMP Can Am T4) third and winner of the Road to Dakar challenge.

Aron Domzala: “We were really nervous on the last part. We had a good lead and I think we have a win. In two and a half years in the car with Maciej we did a lot of strong results but this is our first win together, so a special race for us. First time with the Monster Energy Can Am, a great car and a great team – a great combination.”