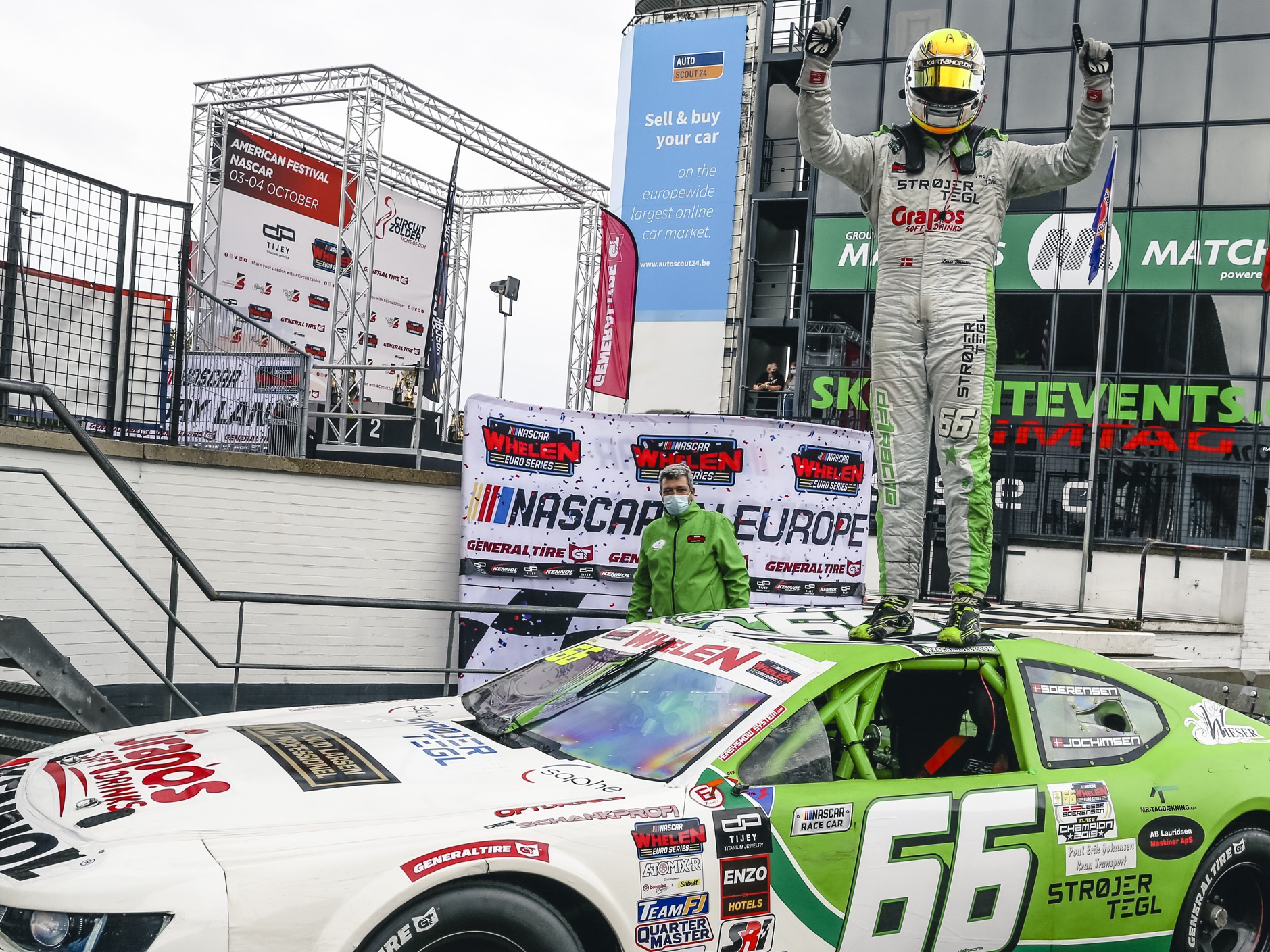 The DF1 Racing driver leads flag-to-flag in the wet.

With a masterful drive in the rain at Circuit Zolder, Lasse Soerensen grabbed his first career EuroNASCAR PRO win on the track where he conquered the EuroNASCAR 2 title in 2019. The driver of the #66 DF1 Racing Chevrolet started from the pole and bravely mastered the rain, leading flag to flag EuroNASCAR PRO Round 3 and crossing the finish line 5.7 seconds ahead of a charging Marc Goossens.

“It was a great race but a tough one with the wet conditions here,” said Soerensen. “It was really all about keeping the car at the track and as soon I was gone at the front I tried to manage the gap and the damp track. The car was really good, I have to thank DF1 Racing for that and I’m really happy that I’ve won my first ever EuroNASCAR PRO race here at Circuit Zolder.”

While the Austrian team DF1 Racing celebrated their first victory in EuroNASCAR PRO since 2014, Soerensen also secured the win in the Junior Trophy classification.

After starting the race behind the safety car, Soerensen was under pressure from Stienes Longin, but the Belgian lost control of his #11 ProJob Chevrolet Camaro by PK Carsport while moving out the Dane’s slipstream on lap 7 and got shuffled down the order. He then put up a strong comeback to finish 11th and post and grab the pole position for Sunday’s Round 4.

Goossens started sixth at the wheel of the #98 CAAL Racing Ford Mustang and made a formidable charge towards the front. The Belgian used all of his experience at his home track to overtake car after car. Starting 7th, Alon Day ended up third driving the #24 Monster Energy Chevrolet Camaro for PK Carsport. The Israeli was careful in the difficult conditions to maximize his score in the third round of the championship.

Jacques Villeneuve, who started third, struggled in the opening laps of the race with the setup of his #5 Feed Vict Racing car. When the rain subsided, the former Formula 1 World Champion upped his pace to finish in fourth under the checkered. The Canadian edged Gianmarco Ercoli, who was second in the Junior Trophy classification.

After a tough season opener in Vallelunga where he struggled with technical issues, Ercolis’ teammate Thomas Ferrando grabbed a competitive sixth place ahead of Solaris Motorsport’s Francesco Sini and DF1 Racing’s Nicolo Rocca.

Martin Doubek ended up ninth and won the Challenger Trophy classification. The Czech missed the first two races in Italy and is competing in both EuroNASCAR championships. Luigi Ferrara closed the top-10 of an exciting and thrilling race. Right behind Longin, NWES rookie Davide Dallara ended up 12th to secure the second step on the Challenger Trophy podium which was completed by Mauro Trione in 15th.

Championship leader Loris Hezemans tried to fight his way back to the front after a crash in Qualifying, but the Dutchman was penalized for passing before the start-finish line. He then focused on setting a fast lap – he will start 6th on the grid for Round 4 – and finished 19th. Patrick Lemarie and Bernardo Manfré were involved in an incident on lap 5 and did not finish the race.