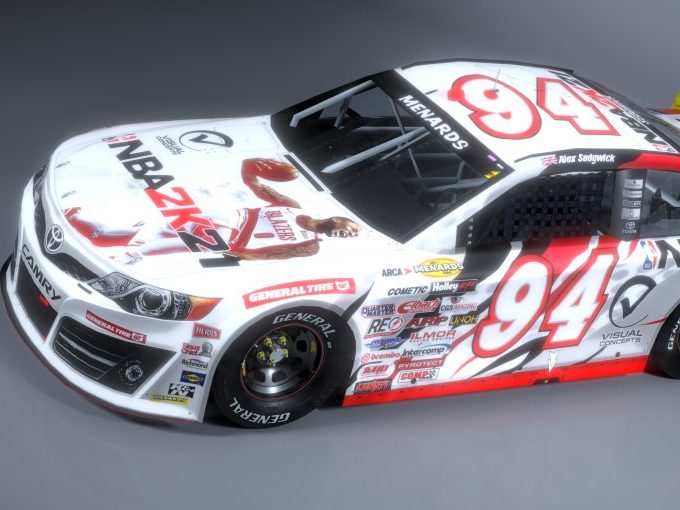 After impressing in his ARCA Menards West Series debut in 2020 at Phoenix, NWES driver Alex Sedgwick will return to the United States this weekend to take part in the December 15-16 ARCA Menards Series Daytona International Speedway pre-season test. The Brit, who will drive for the first time on NASCAR’s legendary Superspeedway, will pilot the #94 Toyota Camry sponsored by NBA 2K 21 on Friday and Saturday.

Sedgwick, who shone in two NASCAR Whelen Euro Series in 2018 and 2019 collecting 3 top-5 and 10 top-10 finishes in 17 EuroNASCAR PRO starts, attended the Daytona 500 for the first time as a NWES, can’t wait to fulfill his dream of racing at the World Center of Racing.

In his ARCA Menards West Series debut in November, Sedgwick finished a solid 13th with a strong performance at Phoenix in what was his 1-mile oval debut.

“It all happened rather quickly. One minute I’m racing Daytona on iRacing, and before I know it, I’m boarding a plane at London’s Heathrow Airport heading to America to test on the real track,” said the 21-year-old, who took full advantage of the opportunities EuroNASCAR provides as a stepping stone towards the United States.“Coming back to Daytona to drive is a dream come true. Watching the Daytona 500 race with my father last year, we both agreed one day I would come back to race at the superspeedway. Now this dream is one step nearer with the test. A big thank you to NBA 2K 21 and Visual Concepts for giving me this opportunity, and I am sure the start of a great partnership together.”

Greg Thomas, President and Co-Founder of Visual Concepts, the creator of NBA 2K 21 said, “We are excited to support Alex in his rise to NASCAR and we are happy to be part of his journey.”

After Alex finishes the test, he will drive back to Miami on Monday to board a plane back to London with his fingers crossed, hoping to come back to race at the very same track on February 13th in the ARCA Menards Series season opener, just before the NASCAR Xfinity Series race, and the day before the Daytona 500.