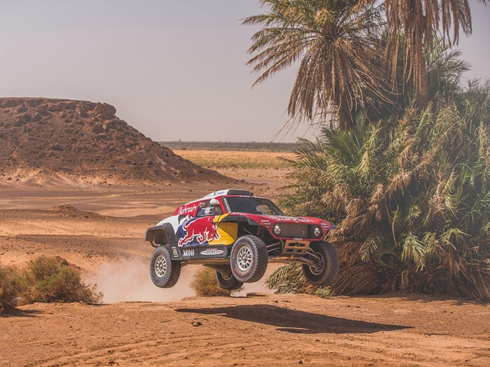 The X-raid team have once again retained Carlos Sainz and Stephane Peterhansel in the upcoming Dakar Rally 2021. Both experienced drivers are back into action in the Mini John Cooper Works Buggy and in the run-up to the Dakar Rally in Saudi Arabia, will participate in the Rally of Andalusia and a rally in the Middle East. The Dakar Rally will take place in 2021 from January 3-15, 2021.

At the beginning of this year, Sainz senior won the first edition on Saudi Arabian soil on behalf of X-raid in a Mini Buggy. In total, the Spaniard won the Dakar Rally three times. Peterhansel has been on the top step of the podium thirteen times. The Frenchman won six times in the motorcycles and now seven times in the cars.

Team manager Sven Quandt: “Carlos and Stephane are a great combination for us. They are not only very fast, but also work well together. But also personally it is a nice cooperation with both of them and also with Lucas and Edouard. We are very happy that both drivers are going to compete for X-raid again, even if it is not an easy preparation for the Dakar.”

Carlos Sainz: “I am looking forward to competing again together with X-raid at the upcoming Dakar. Of course I will try to defend my victory of 2020. Now that some time has passed, I must say that this is one of my victories of which I am very proud. The upcoming Dakar will certainly be another great event – after this years’ experience – probably even better. Concerning the MINI JCW Buggy, despite the difficult time we were able to find some areas that we could improve on. The team has done a great job and I think we have become even better.”

Stephane Peterhansel: “I am looking forward to being part of the X-raid team again at the upcoming Dakar. I could not win the last Dakar, but I still have good memories of it: The team spirit was great and the Buggy was also very good to drive. I was really happy about my third place. My motivation is still there – maybe even more so as I know that the Buggy will be even better. I have a new co-pilot sitting next to me and I think Edouard has a lot of potential that he can certainly exploit to the fullest at the Dakar. I am also very much looking forward to Saudi Arabia – the landscape there is simply incredible.”