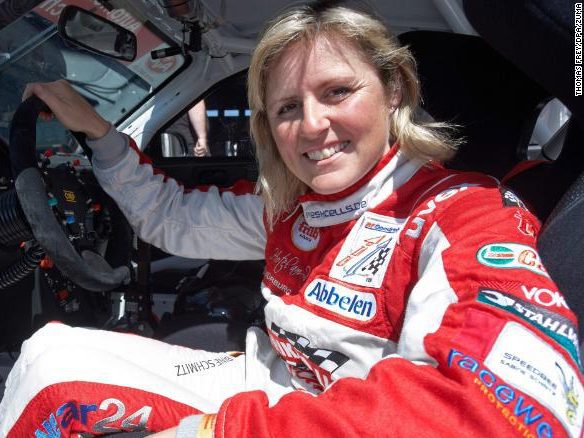 “Top Gear” presenter and famed racing driver Sabine Schmitz has died following a battle with cancer. She was 51.

Schmitz is best known for winning Germany’s Nurburgring Nordschleife, one of the toughest racing circuits in the world, in 1996 and 1997, the only woman to do so. She is known as the “Queen of the Nurburgring.”

Schmitz appeared on BBC’s “Top Gear” in 2004, where she drove around the track in a van. In 2016, she became a presenter on the show with Chris Evans.

“The Nurburgring has lost its most famous female racing driver,” the track said in a statement. “Sabine Schmitz passed away far too early after a long illness. We will miss her and her cheerful nature. Rest in peace Sabine.”

“She gave me pointers on how to drive a Ferrari very fast and hunted me down in a banger race. Brilliantly bonkers and an amazing human being! RIP the great Sabine Schmitz,” tweeted current “Top Gear” presenter Paddy McGuinness.

Clare Pizey, the show’s executive producer, said: “Sabine was a beloved member of the ‘Top Gear’ family and presenting team since 2016, having first appeared on the show in 2004, and everyone who had the pleasure of working with her on the team is in shock at this news.

“Sabine radiated positivity, always wore her cheeky smile no matter how hard things got — and was a force of nature for women drivers in the motoring world,” continued Pizey.

“Like everyone else who knew her, we will truly miss her — Sabine really was one of a kind. Our thoughts are with her partner Klaus, who was always by her side and who we welcomed to Dunsfold many times, and her family in Germany.”