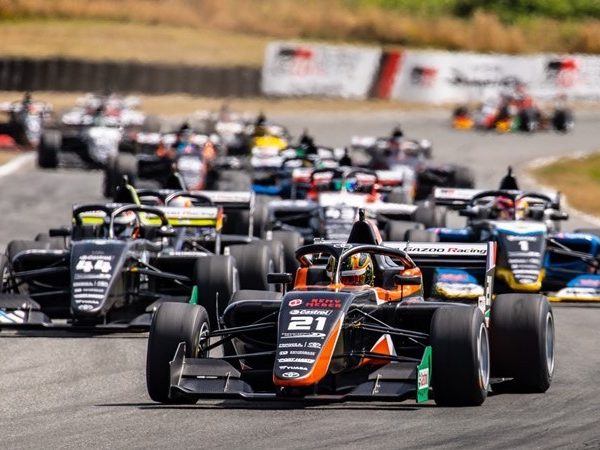 Seventeen year old French racer and former karting champion Emilien Denner showed the motorsport world he means business with victory in only his fifth motor race in a classy international field at Teretonga.

Starting from pole position, the former basketball player and karting star showed a clean pair of heels to his opposition to win the second race of the weekend at Round 2 of the 2020 Castrol Toyota Racing Series.

“I was just focussing on my driving, trying to get the best out of myself,” he explained afterwards. “The last corner was particularly important so they couldn’t get my slip stream. I think I had a pretty good restart so it in the end was fine. Winning gives me a lot of self-belief. Karting gave me a lot because I could win. Now here, it is all new for me, so it is nice to be winning again.”

The grid featured a reverse top eight from the results of Saturday’s race and that put Denner on his first pole position in car racing. Alongside him on the front row was Germany’s Lirim Zendeli in his Giles Motorsport-run car. Team mates Ido Cohen and Liam Lawson lined up on the second row for M2 competition with Franco Colapinto and Igor Fraga occupying the third for Kiwi Motorsport and M2 respectively.

The start of the 20 lap race was clean enough but did see the first three rows of the grid compress as they surged towards the first turn. Denner got a good start as did Zendeli. Lirim then tried the big move around the outside of Teretonga’s turn one but the young Frenchman stuck to his line and comfortably held him off. Behind them Lawson had made for the inside line from his third place starting slot but Ido Cohen went around him to grab third. Towards the back, however, Henning Enqvist had spun into the gravel and was out, and that meant a Safety Car period for several laps while his Toyota FT-60 was recovered.

At the green light with 14 laps to go it was Denner from Zendeli, Cohen, Lawson, Franco Colapinto, Igor Fraga, Caio Collet, Yuki Tsunoda, Grégoire Saucy and Lucas Petersson rounding out the top ten. This time there was an orderly restart and first to show over the course of the lap was Denner who quickly established a lead of a few car lengths ahead of Zendeli and the chasing pack.

As the tightly packed field settled down, it was Lawson who looked frustrated in fourth. For several laps he was the fastest car on the track but was unable to find a way past Cohen and this allowed Denner and Zendeli to edge away at the front. Denner, meanwhile, continued to look composed and mature in only his fifth circuit race, focussing on his own race and working only on keeping a comfortable gap between himself and Zendeli behind him.

Lawson bided his time for a few laps before launching a full on attack on Cohen and as the field crossed the line to start lap 15 he pulled off another great pass around the inside of turn 1 to take third place from the Israeli driver. The Kiwi sold him the dummy by putting his car on the outside at the corner entry and then switched left to the inside and simply drove by to third.

As Denner continued to lead with four to go, Lawson continued his charge and crept up onto Zendeli’s tail. The extra pressure of having the champion in his mirrors seemed to spur on Zendeli and he closed in on the leader, but his main focus was not the win but keeping second.

A solid effort by Lawson around the outside of turn one with three to go failed but the champion quickly closed again. Despite several serious attempts, he refrained from taking major risks and as the flag ended the race it was a superb Denner, from Zendeli, Lawson, Cohen, Colapinto, Fraga, Tsunoda and Collet who had enjoyed a fine battle for much of the race, with Saucy and Puerto Rico’s Jose Blanco rounding out the first ten.