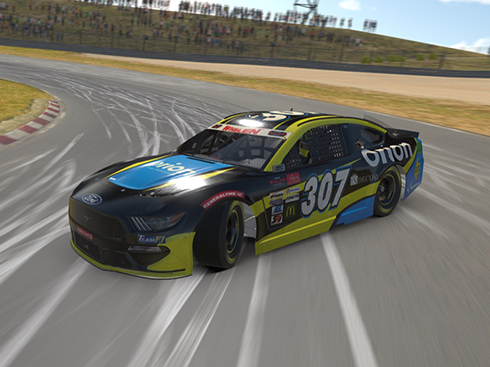 Round 3 of the EuroNASCAR Esports Series delivered the fourth different winner in as many virtual races since the Daytona Prologue at the end of another spectacular event. Jeffrey Roeffen took the win at his home track of Circuit Zandvoort in dominant fashion. The 19-year-old Hendriks Motorsport mechanic beat his teammate Tobias Dauenhauer, while Lasse Soerensen held on to the points lead with another podium finish.

Hendriks Motorsport left an important mark on its home race at Circuit Zandvoort. The Dutch team celebrated a 1-2 finish with Roeffen – the 19-year-old chief mechanic of the #7 Mustang driven by Martin Doubek in real-life – grabbing the first checkered flag for team personnel in the ENES.

Completing a perfect event Roeffen took the pole position, won his Heat race for the fourth consecutive time this season and led flag-to-flag in the 30-minute Round 3 Main Event race.

“It was a good race for me for sure,” said Roeffen in virtual Victory Lane. “I’m really happy that I won the Main Event race after winning so many Heats this season. I cannot thank everyone at Hendriks Motorsport and Orion enough for this opportunity. During the race I had to manage the tires well and keep the pace. It worked out, I managed the gap and grabbed the win, it was just fantastic. Of course I hope to be back in Victory Lane again next time out in Indianapolis.”

While Roeffen was flying towards the checkered flag, Dauenhauer, who also won his 10-minute Heat, made a great start and quickly put a gap between himself and third place. Behind the German, a spectacular five-way battle filled with door-to-door action infuriated around the 4,320-km Dutch road course.

With four different winners in four races – including the Prologue at Daytona – the EuroNASCAR Esports Series proved to be one of the most exciting virtual championships in Europe with a tight competition and a thrilling battle for the championship win.

Motorsport journalist Michael Bräutigam represented the Hockenheim American Fan Fest in the event at the wheel of the #479 Chevrolet Camaro. By ending up 13th in the Main Race the German was the best real NWES track partner representative. Circuit Ricardo Tormo telemetry engineer Antonio Ortiz crossed the finish line in a solid 17th place. Autodrom Most driver Gabriela Jilkova, who was second in the Last Chance Qualifier, grabbed the 22th place overall, while GT ace Jeroen Bleekemolen had a tough ENES debut finishing 31st.

The battle for the championship cannot be tighter: Soerensen leads the standings by 3 points on Zandvoort race winner Roeffen. Reigning NWES champion Hezemans follows in third, 6 points behind the leader. Castro sits in fourth ahead of Delsaux, Dauenhauer, Andreas Jochimsen and Bryan Crauwels, who grabbed the four bonus points in Zandvoort for the most positions gained in the Main Event by starting 34th and finishing 15th.

Alex Fontana and Alon Day – the Israeli couldn’t make it home from work in time to take part in Round 3 – close the top-10 in the overall point standings.