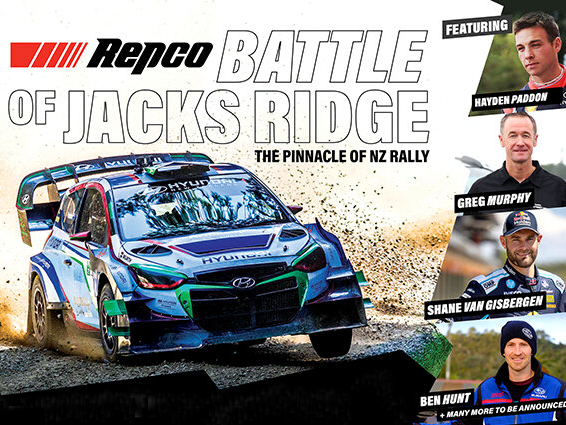 Repco Signs on as Naming Right for The Repco Battle of Jacks Ridge!

New Zealand’s largest auto parts and car accessories retailer Repco has come onboard as the naming rights sponsor of the Repco Battle of Jacks Ridge in November.

With over 90 stores nationwide and nearly a century of history behind it, the brand has been a long-time supporter of Kiwi motorsport events across all formats.

Repco has been a previous naming rights sponsor of Rally New Zealand and has recently announced a new deal to sponsor the Supercars Championship in Australia as well as the iconic Bathurst 1000.

“Repco has been proudly associated with a rally on New Zealand’s epic gravel roads for many years including the Race to the Sky and the Repco Westland Rally,” Executive General Manager of Repco, Jonathon Maddren said.

“The fantastic new track at Jacks Ridge is going to be a spectator’s dream so we’re really excited to be involved.” “The Repco Battle of Jacks Ridge is set to be an event every motorsport fan is going to love and with this field of drivers the Battle is on!”

Rally New Zealand chairman Peter Johnston said the partnership was a natural fit. “Repco have been tremendous supporters of motorsport in New Zealand for a very long time and were quick to jump at the opportunity to partner with us for this exciting event.” “We really think this is going to be a rally sprint that will take the sport to new levels and we look forward to sharing that journey with our friends at Repco.”

The Jacks Ridge WRC Power-Stage has been built around the natural landscape of former national champion Andrew Hawkeswood’s Whitford property, utilising the undulations, ridges and valleys of the Whitford private property in which it sits.