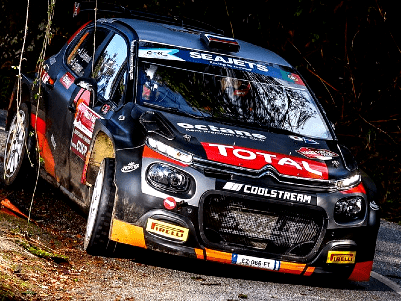 FIA European Rally Championship 2020, Round 3 of 6

Lukyanuk, in a Pirelli-equipped Saintéloc Junior Team Citroën C3 R5, had been heading to a relatively comfortable victory in changeable weather conditions only to spin on the penultimate stage and hand the chasing Yoann Bonato and Iván Ares the chance to close up.

But the 2018 ERC champion held his nerve through the rain-hit closing run to win for the second time in this year’s European championship and extend his title advantage in the process.

“It was an odd thing from me, it was my mistake, I made a spin,” Lukyanuk said. “I initiated the turn with the handbrake and initially it was not locking so I pulled it a bit more and it suddenly snapped off. It’s never happened to me before and it was not a nice moment to happen but, okay, it kept us motivated and focused and this result is amazing actually. In the morning it was much more relaxed than during the day because the guys behind gave me a very hard time. I tried to control the pace and it was on a nice way before that spin actually. But we did a good job on the last stage despite we had massive rain straight away from the startline. But I gave it everything, a good drive and on a proper pace. I can be proud of myself, I am happy. Many thanks to my team for a great car and a great job and to Pirelli for the great tyres, I was dependent on them. I hope we get more sponsors for the next event because we are in trouble at the moment but let’s go and have some fun now.”

Bonato, who was 4.6s behind Lukyanuk, beat Ares to second place in the absolute classification by 0.1s with Ares second of the ERC contenders. Grégoire Munster triumphed in ERC1 Junior for the first time in a fine third place with Tibor Érdi Jr taking the ERC2 laurels for the second event running. Rallye Team Spain’s Pep Bassas claimed his maiden victory in Pirelli-supported ERC3 Junior, beating points leader Ken Torn in a final-stage decider. Andrea Mabellini scored a second Abarth Rally Cup victory of 2020 in his Pirelli-equipped Abarth 124 rally.