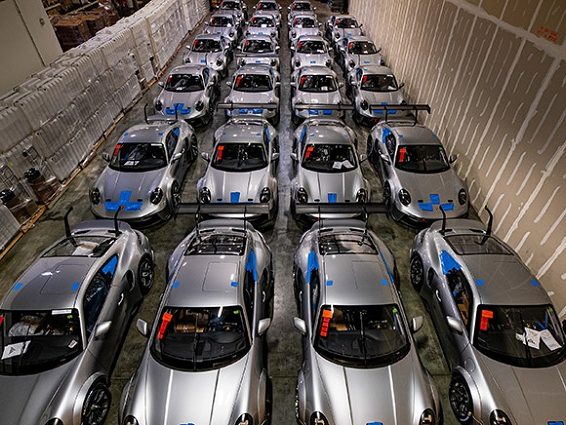 The race cars, the first batch of the 992 spec delivered anywhere, arrived at a facility near Hartsfield-Jackson Atlanta International Airport after clearing U.S. customs. That’s where teams competing in the IMSA-sanctioned series picked up the cars they ordered to take to their own race shops and prepare for the season-opening doubleheader in March at Sebring International Raceway.

Porsche Carrera Cup North America will conduct eight doubleheader events in 2021 for its inaugural season. It joins other Porsche Carrera Cup one-make series around the world where the new-generation 911 GT3 Cup car will compete.

Among the teams expected to take possession of their new Porsche 911s were many familiar to the IMSA paddock, including Kelly-Moss Road and Race, Wright Motorsports, JDX Racing, BGB Motorsports, Black Swan Racing, ACI Motorsports, Moorespeed, Team Hardpoint EBM, Goldcrest Motorsports, Topp Racing and TPC Racing. There were also a pair of IMSA newcomers to the list in Molitor Racing Systems (MRS) and 311RS Motorsport.

MRS, a German-based team that has competed in Porsche series internationally, announced l its plan to enter Porsche Carrera Cup North America with a driver lineup to be determined. Karsten Molitor, the team principal, said MRS is undertaking the entire setup of its U.S. base alone, opting not to partner with an existing team.

“It was an ambitious plan from the very beginning,” Molitor said. “To establish the original MRS team here in the U.S., we’re ready to go the extra mile, ready to work a lot for it. We’re coming to stay and we’re coming to have the most possible success. I’m personally looking very much forward to our very first competition here; we are putting in the effort to make this debut as successful as possible.”

“I am so happy Porsche has decided to bring Carrera Cup to the States,” Keen said. “It’s a great opportunity for my career to come back to professional racing with my friends at 311RS Motorsport and in the Porsche GT3 Cup platform. There are a lot of familiar pieces to this program for me, so I expect to hit the ground running.

“The inaugural Porsche Carrera Cup North America calendar looks amazing with some of the best tracks in North America. It looks like Porsche has taken the new 992 GT3 Cup to a new level. I can’t wait to see the new car in the flesh and go wheel to wheel with 20-plus of them soon!”

All teams will have an opportunity to test at Sebring on March 8-9, ahead of the race week that is part of Mobil 1 Twelve Hours of Sebring Presented by Advance Auto Parts activities. The Carrera Cup races, each 45 minutes in length, are set for 5:30 p.m. ET Thursday, March 18 and 10:05 a.m. Friday, March 19. Both will stream live on IMSA.com. Tickets are available at SebringRaceway.com.