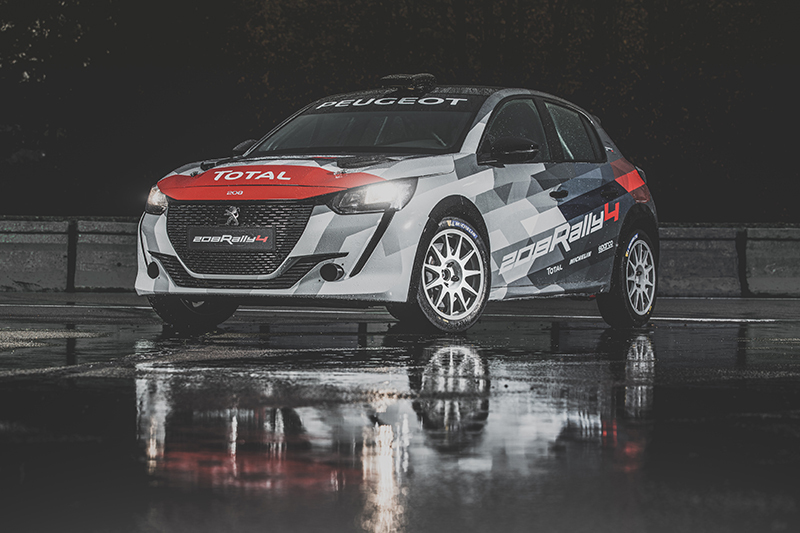 Peugeot Sport has employed all its know-how to reinforce its offering when it comes to rally cars in the two wheel drive category with the arrival of the brand-new Peugeot 208 Rally 4.

This is a totally new car that Peugeot Sport’s engineers and mechanics have been actively working on since the start of summer 2018. Developed using the new Peugeot 208 road car as a base, the 208 Rally 4 has made the most of all the technical and aesthetic evolutions showcased in the road car.

The new Peugeot 208 Rally 4 aims to be the successor to the 208 R2, which is a best-seller in the two wheel drive category and the most popular rally car in the history of Peugeot Sport, with more than 450 examples sold.

To achieve this goal, the mission for Peugeot Sport’s engineers was clear: to create a fast and reliable rally car that’s fun to drive. Their renowned experience, together with the numerous test sessions that have taken place in various terrain and weather conditions, respond perfectly to the initial brief.

The new Peugeot 208 Rally 4 is equipped with a fresh three-cylinder turbocharged 1.2-litre engine that uses the latest PureTech technology. It’s the same base engine used in the road car, which has been adapted for competition use by the engineers from Peugeot Sport to put out 208 horsepower, with a bigger turbo, Magneti Marelli engine management system and SADEV gearbox.

According to PSA Group, all of this is housed within the new CMP platform used by all B segment cars from the PSA Group, which offers reduced weight and better vehicle dynamics for improved sporting performance.

The Peugeot 208 Rally 4 made its first competitive appearance in Spain under the Peugeot Rally Academy flag at the Madrid Rally.

It was driven by Efren Llarena and navigated by Sara Fernandez: the 2019 FIA ERC3 champions. It was also in action in France for the final of the FFSA French asphalt rally championship: the Rallye du Var.

In accordance with an FIA homologation process that will be carried out by the end of the first quarter of 2020, the Peugeot 208 Rally 4 will be available at the beginning of 2020, at a price of 66,000€ (plus tax).

To encourage young talent, the first examples of the Peugeot 208 Rally 4 will be prioritised for drivers taking part in the one-make 208 Rally Cup in France and Iberico held in Spain and Portugal.