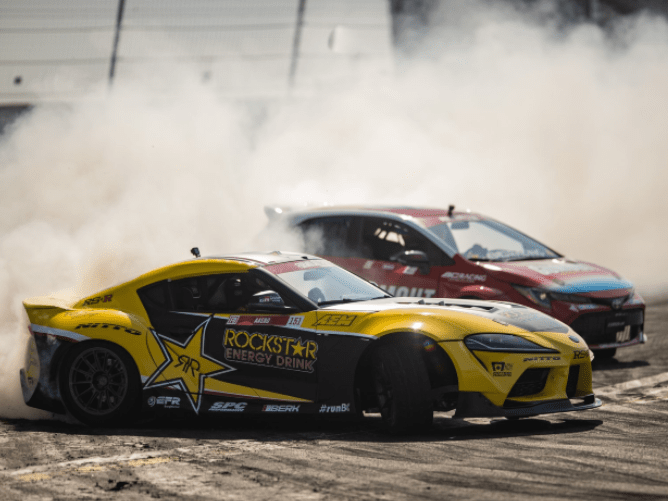 IRWINDALE, California (November 2020) – Rockstar Energy Drink driver Fredric Aasbo chalked up his 15th career victory on Friday when he came out on top at Irwindale Speedway. It was his second win this season in the all-new Toyota GR Supra and he heads into the Sunday season finale third in the championship points behind teammate Ryan Tuerck, in second, and rival Vaughn Gittin Jr.

Both Papadakis Racing Toyota drivers are in title contention as they head into Sunday’s season-ender. “Everybody asks about ‘team orders’ when a team is in the position of having two drivers in the hunt,’ said Stephan Papadakis, who leads the most winning organization in series history. “Sure, we have team orders and they’re the same for both drivers: Win.”

Sunday’s competition bracket will see 2015 champion Aasbo meet 2010 champion Gittin Jr. for a head-to-head match-up in the Top 16. If Aasbo can advance past his rival, both Papadakis Racing drivers will have a mathematical shot at this year’s title and could potentially meet for a no-holds-barred battle in the Final 4.

The venue, where the first professional drifting event took place in the United States back in 2003, is the spiritual home of the sport, often referred to as ‘The House of Drift.’ It never fails to deliver close competition and has been the site of many upsets over its long history of hosting the series finale.

The first night of this weekend’s doubleheader competition on Friday saw Tuerck’s Gumout / Nitto Tire / Mobil 1 Toyota Corolla Hatchback hit the wall in his Top 16 battle, while Aasbo had to advance through a one-more-time showdown in his Rockstar Energy Drink Toyota GR Supra in the Final 4 when his first battle with Gittin Jr. was too close for judges to call.

Aasbo’s move into the all-new Toyota GR Supra this year saw Tuerck join the Papadakis Racing organization to take the helm of the Toyota Corolla Hatchback. It is their first season competing under the same tent and they have proven to be a powerhouse duo. Between them, they have earned seven podiums — including three victories — in seven rounds of championship competition.

Team partner Nitto has the Tire Cup on lock, while a strong showing on Sunday could earn Toyota the Auto Cup.

The team spent Saturday working hard to fix battle scars on both competition cars after a tough Round 7. When they take the line on Sunday, Aasbo will have a rebuilt engine and Tuerck’s car will have undergone key repairs to the chassis and subframe.

Competition is streamed live online across the series’ social media channels. This season has seen record Livestream tune-in and social engagement. Stream and content views for the most recent Rounds 5 and 6 achieved nearly four million views on YouTube alone, with some 27.7 million minutes of content watched. Formula Drift’s social media engagement has led all other major racing series in the USA.

Taking a lead from other series including NASCAR and IndyCar, Formula Drift has implemented a host of safety precautions this season. The Irwindale venue will be closed to fans.

Aasbo joined Papadakis Racing in 2011 and earned the series crown in 2015. He started his Formula Drift career in 2010 as a privateer in a Mark IV Supra and comes full circle this season as he takes his first victory in his all-new Toyota GR Supra. He has a record 15 career victories in the series – all with Papadakis Racing.

Tuerck is a leading social influencer and top-tier driver with a career 18 podiums. His down-home charm, commitment to the sport’s grassroots, and talent in front of the camera have brought him a social fanbase of over a million followers.

The Papadakis Racing team began drifting in 2004 and is the most winning team in Formula Drift history, earning the 2015 title with driver Aasbo, as well as back-to-back championship titles with driver Tanner Foust in 2007 and 2008.