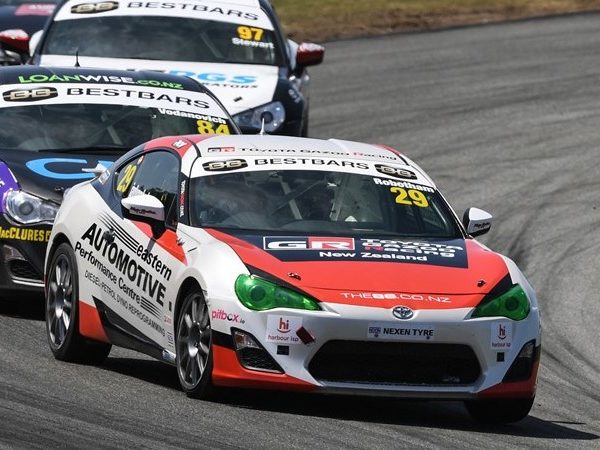 Australian Jaylyn Robotham has smoothed the transition to New Zealand, racing for the first visit to Teretonga Park over the weekend. Starting from pole position in the first race, Robotham made the coverted position pay as he was pushed hard all the way by Peter Vodanovich as an eight car battle for the lead slowly became a two car scrap which was ultimately won by the Eastern Performance Centre car of Robotham. Third – for his first podium in the championship – was Campbell Stewart in his M2 Competition run Total Oil car.

In the second race of the weekend, it was another drag race at the start between the top two contenders from Saturday, with Robotham and Campbell Stewart in the Total Oil car leading the drag race from the front row to the first corner. And once again it was Robotham who held his line around the fast and long corner to emerge in front. Connor Adam had made a great start from the third row to jump Jaden Ransley for fourth position while Peter Vodanovich sat in third place in the NEXEN DTM car.

It ended with Robotham taking the win over Vodanovich and Stewart. Robotham was delighted to take the win, but reckoned the speed of the leading pack would mean it was all game on again for the final race. “I’m going to need to get a good start and keep them behind me,” he said. “It’s going to be a five or six car train no question.”

Race Three did not disappoint with Vodanovich made the perfect getaway from the front row to beat pole position holder and Race 1 and Race 2 winner Jaylyn Robotham in the Eastern Performance car and to dive into the lead at the first corner. For three quarters of the 20 lap encounter he defended a small lead before stamping his authority on the race to win by almost one and a half seconds.

Robotham had to be satisfied with second place in the race, but the round win with two firsts and a second propelled him narrowly to the top of the points after three rounds of the championship.