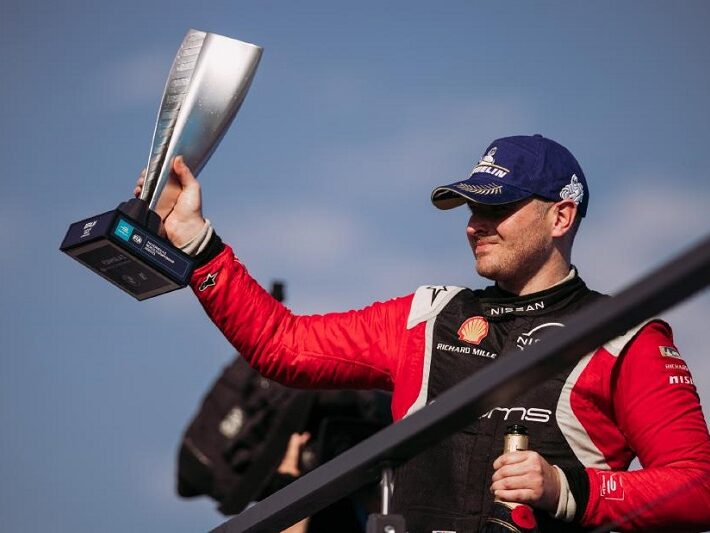 Rowland qualified in P2 for round 15, the season seven finale, and battled hard in an intense and incident-filled race to maintain his position across the line and sign off in style for his last race of three seasons competing with the Nissan e.dams Formula E team. His teammate Sebastien Buemi finished outside the points.

“We are finally very happy to collect the points we deserve with a great podium by Oli for Nissan,” said Tommaso Volpe, Nissan global motorsports director. “This P2 better represents our performance in the second half of this season, showing our stronger race pace that now matches our qualifying pace. We’ve had our fair share of bad luck this season, so it’s great for everyone in the team who have worked so hard to celebrate. As we look forward to season eight our stronger race pace gives us confidence that we can race hard and fast from the first round.”

Nissan races in Formula E to bring the excitement and fun of zero-emission electric vehicles to a global audience. As part of its goal to achieve carbon neutrality across its operations and the life cycle of its products by 2050, Nissan intends to electrify all-new Nissan vehicle offerings by the early 2030s in key markets. Nissan aims to bring its expertise in transferring knowledge and technology between the racetrack and road for better electric vehicles for customers.

“A great way to wrap up our season with an impressive podium for Oli,” said Gregory Driot, co-team principal of Nissan e.dams. “Ultimately, as a team, we didn’t finish where we wanted, but now we see the updated Nissan Gen2 Formula E powertrain come into its own and we will approach season eight buoyed by our race car’s speed and efficiency. Now it’s time to celebrate the podium with our incredibly hard-working and talented Nissan e.dams race team, and on behalf of everyone at the team, I would like to wish Oli all the best for the future.”

Nissan e.dams finished the season in P10 in the teams championship, with Oliver Rowland in P14 and Sebastien Buemi P21 in the drivers championship, respectively.

Season eight, 2021/22, of the championship begins in Diriyah, Saudi Arabia, in January.

It was a busy and productive season seven away from the track for Nissan. By competing in Formula E, Nissan showcases to the world just how thrilling and enjoyable all-electric vehicles are to drive, and this season, like its two previous seasons of competition, the brand powerfully connected its electric racing activities to the exciting vehicles customers could buy with a series of high-profile activations.

At the beginning of season seven, Nissan announced that in honor of two of its finest road-going all-electric vehicles, the drivers’ all-electric race cars would be named ‘Nissan Ariya’ for car #23, and ‘Nissan LEAF’ for car #22. The cars would go on to compete with their new names and familiar race numbers throughout season seven. With the road cars clearly named on the race cars, Formula E fans would quickly and easily connect Nissan’s exciting Formula E competition to the brand’s all-electric products.

At the beginning of season seven, Nissan Formula E launched its ‘Feel Electric’ brand positioning. Feel Electric describes how drivers feel when they drive Nissan all-electric vehicles: Every sensation you have is electricity flowing through your body, the same electricity running through our cars. Instinctive reactions and heightened emotions. Rising euphoria and thrilling excitement.

Nissan Brain to Performance, launched in June 2021, is an exciting, cutting-edge new program that uses advanced brain imaging and analysis to determine the anatomical specifics of high performance, professional drivers’ brains, and, through a bespoke brain training program, seeks to enhance their brain performance in the search for greater performance on the racetrack. This innovative, long-term program will build momentum as Nissan races into season eight of the ABB FIA Formula E World Championship, and beyond.