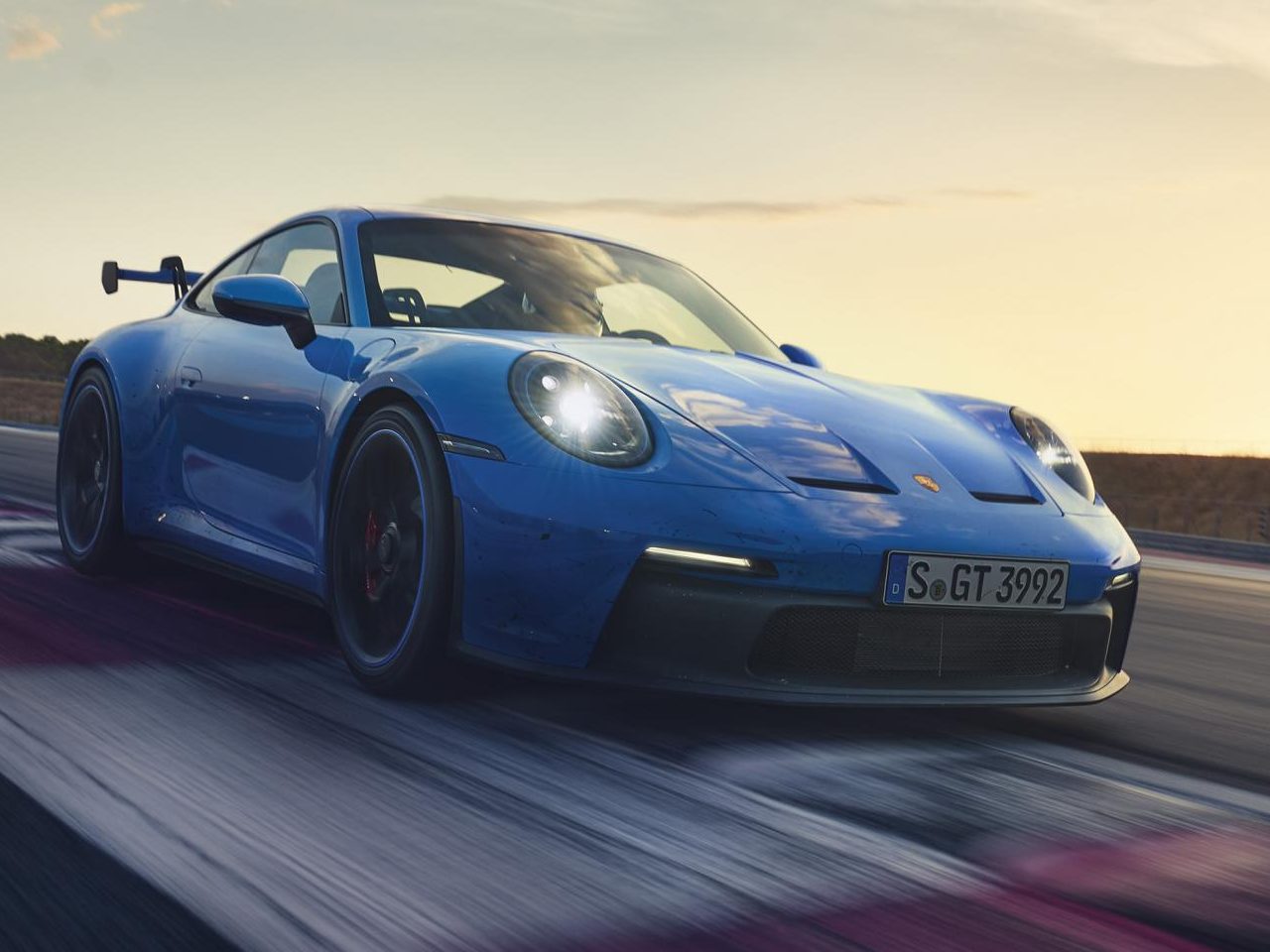 Porsche have revealed a camouflaged prototype of their next one-make cup racing car due to be campaigned in the Porsche Mobil 1 Supercup next year and Porsche PAYCE Carrera Cup Australia for the 2022 season. It is the first racing car based on the current 911 generation 992.
The seventh cup-car generation will carry forward a great legacy: Since its 1990 forerunner, Porsche has built 4,251 units of the globally successful one-make cup racer. Of its immediate predecessor alone, 1,410 cars rolled off the 911 assembly line at Zuffenhausen: 673 vehicles from the 991.1 generation and 737 from the 2017-launched 991.2 generation. Technical specifications and further information will be announced.
The development of the new 911 GT3 Cup began in mid-2018 with the definition of the concept: How should the new racing car look and what should it be able to do? What can be improved and what expectations do the customer teams have? “It proved very beneficial to exchange ideas in close cooperation with the racing teams and our international one-make cup organisations – around the world and also outside our own series. We listened carefully to the engineers and mechanics as well as the drivers and team bosses to find out what they like about the current car and what is needed,” states Product Manager Christoph Werner. “By doing this, we got a very accurate picture of the mood and we gathered a great deal of information so that we could set the right priorities for the new, globally-run model. In fact, this also applies to the eventual running of the vehicle in, for example, endurance races or club sport events.”
After a busy year and several hundred newly-designed parts, the “TC01” (Test Car 01) was put on its wheels in mid-2019. “After we’d completed the first bodyshell and all the components at our Motorsport Centre in Flacht, we’d completed the car in a record time of just ten days with the project team,” reports Project Manager Jan Feldmann. “That was an interesting phase. It showed that the project team, which was founded in 2018, works perfectly.”
While the first prototype headed straight to the in-house wind tunnel, a second car was sent out onto the test track at the Weissach R&D Centre. “The car was actually only supposed to cover a couple of kilometres as a shakedown,” Feldmann recalls. “We ended up doing 30 flying laps with racing driver Klaus Bachler at the wheel. The first time he flew past us at full speed, we all got goosebumps. The first shot was a winner. We received some excellent feedback.”
After four more days of testing at Weissach, “TC01” embarked on a European tour: Germany’s Lausitzring was followed by tests on the high-speed circuit of Monza and other international racetracks. “For us, it was important to learn as much as possible on the broadest possible range of circuits with different characteristics,” explains Technical Manager Martijn Meijs. “These experiences were then incorporated into the final stage of development.”
In mid-2020, after several thousand kilometres on the racetrack, “TC01” was joined by a successor: the first pre-production vehicle from Zuffenhausen. “It was produced on the same assembly line as the other 911 at the main facility and was very similar to the final racing version,” said Feldmann. The main task of this test car was to complete long-runs, including on the Grand Prix circuit of the Nürburgring. Joining the Austrian Bachler for the tests were his German colleagues Marco Holzer, Nordschleife record-holder Lars Kern, three-time Porsche Mobil 1 Supercup champion Michael Ammermüller and Porsche brand ambassador Jörg Bergmeister.
“In choosing the drivers, we also wanted a wide range of personalities,” explains Meijs. “They all gave us specific feedback. As engineers, we experience the car through what they say.” Bergmeister’s feedback would have sounded like music to the ears of the project team: “In terms of performance, the new 911 GT3 Cup has taken a giant leap forward – the lap times also underline this,” said the seasoned specialist. “It has once again been improved in all areas – from the engine and suspension to the aerodynamics and brakes right through to the electronics and ergonomics.”
After completing all development tests as well as many hours on component test-benches, the team headed to the Motorsport Arena Oschersleben for the final shakedown. By this stage, the vehicle was identical to the production racer and was again dressed in the same conspicuously inconspicuous camouflage: the psychedelic pattern which mirrored the outline of famous racetracks. Several drivers were once again able to get an in-depth impression of the latest development stage.
The project team also checked something else in Oschersleben: how the teams would handle the new Cup car: “The idea was to simulate an entire race weekend from our customers’ perspective and to use the vehicle as the teams would – including deliberately inciting problems, incorrect operations and damage scenarios,” explains Werner. “In this way, we came across minor issues that we could rectify. At the same time, our technicians for customer service at the racetracks and Marco Seefried as the rookie coach in the Porsche Mobil 1 Supercup got deeper insights into the functions, operation and handling of the car. That was important to us. We’ve done our utmost to be as prepared as possible for the market launch of the new 911 GT3 Cup.”
“After this extensive field test, we knew that the Cup car is ready for customers to go racing,” emphasises Matthias Scholz, Overall Project Manager for GT Racing Cars. “We returned from Oschersleben feeling completely satisfied.”