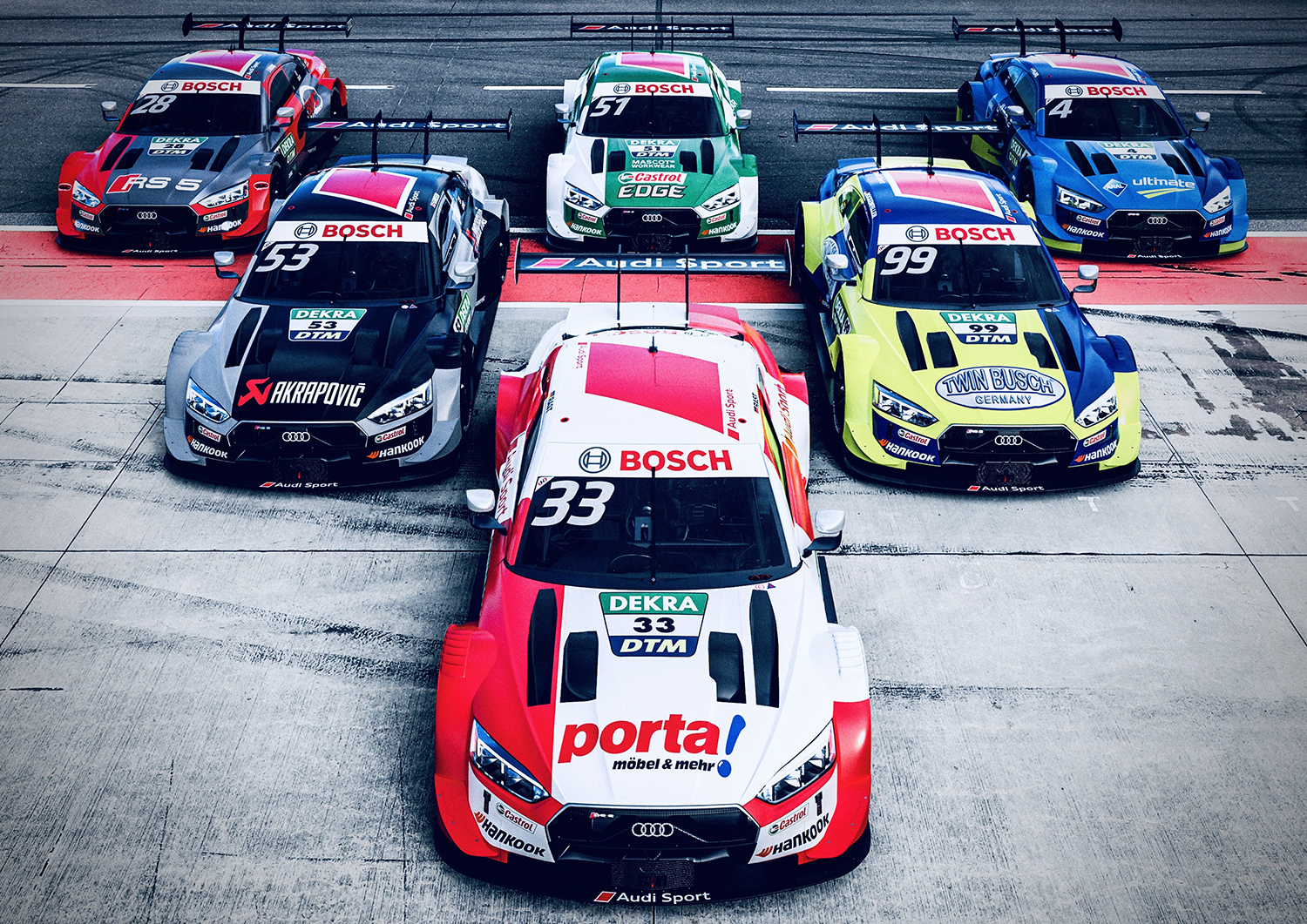 Audi Design has given the six factory-entered DTM cars a fresh look.

Now the designs of the other five Audi RS 5 DTM cars, which will be driven by Loïc Duval (F), Robin Frijns (NL), Jamie Green (GB), Nico Müller (CH) and Mike Rockenfeller (D) have been revealed.

René Rast will also be supported by porta Möbel in the “title defense” project this year. With its approximately 8,000 employees, porta is one of the largest furnishing companies in Germany. New on board for the DTM 2020 are also TWIN BUSCH, BMC Air Filter and Riedel Communications.

Mike Rockenfeller, DTM Champion of the year 2013, will drive an Audi RS 5 DTM in the bluand yellow outfit of TWIN BUSCH, specialist for professional automotive workshop equipment. Loïc Duval is driving a red-grey Audi RS 5 DTM in the colors of BMC Air Filter. The Italian company, which develops and sells air filters, was already present on Duval’s Audi RS 5 DTM at the joint “Dream Race” of the DTM and the SUPER GT in Fuji at the end of 2019.

The fans of Jamie Green will have to get used to a new look: This season, the longest serving DTM driver on the entire grid will be driving the black-grey Akrapovič Audi RS 5 DTM. In , Nico Müller and Robin Frijns will continue to compete in the colors of Castrol EDGE (green-white) and ARAL ultimate (blue).

Audi Sport has been relying on the RS 5 Coupé in the DTM since 2013. In accordance with the new regulations, last season’s championship winning car will contest the 2020 season with a number of detailed changes aimed at making the DTM even more exciting and cost-effective.

Fundamental technical changes are not allowed by the Class 1 regulations introduced for the DTM in 2019, which are designed for a level playing field and cost-efficiency.

The introduction of turbo technology has given DTM a stronger connection to road car development. The TFSI engine of the Audi RS 5 DTM of model year 2020 has an engine output reduced by around five percent compared to the previous year.

Background: For the 2020 season, DTM has reduced the amount of fuel that may flow to the engine per hour from 95 kilograms to 90 kilograms. By means of the “Push-to-Pass” function, the engine output can be increased to around 640 hp in the short term, as in 2019. This should make the races even more exciting.

Therefore, from the 2020 season onwards, DTM drivers will be able to use the “Push-to-Pass” system – for overtaking, for example – twice as often during the race as before. During 24 race laps (previously twelve) the additional power may be switched on for up to five seconds at a
time.

In addition, “Push-to-Pass” is also permitted in qualifying from the 2020 season onwards. This new qualifying rule also applies to the use of the “DRS” function (“Drag Reduction System”), which flattens the rear wing, reduces the car’s drag and increases top speed.

From 2020, DRS may be used in races more often than before. With the combined use of “DRS” and “Push-to-Pass”, the Audi RS 5 DTM reaches a top speed of almost 300 km/h, depending on the track.