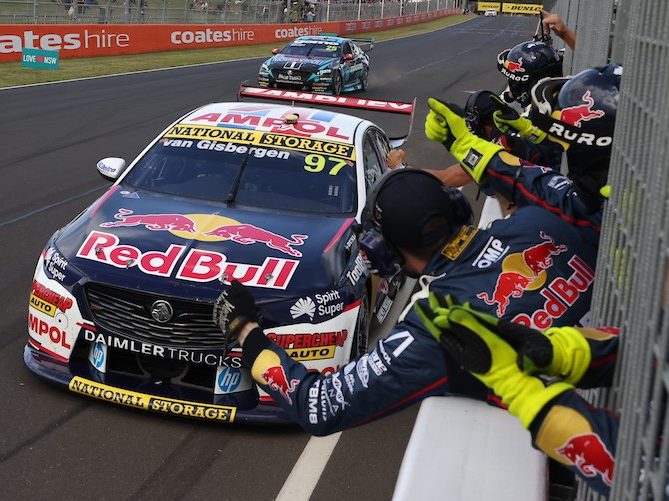 Shane van Gisbergen has picked up where he left off in Bathurst, with the Red Bull Ampol Racing driver dominating Race 1 of the new season at the Repco Mt Panorama 500.

Van Gisbergen, who claimed victory in last October’s Bathurst 1000, was never headed in the 40-lap affair, which saw a number of key runners fall by the wayside.

It marked the third instance that the Kiwi had won the opening race of the season, following victories on the streets of Adelaide in 2017 and 2018.

The race was punctuated by separate dramas for Cameron Waters,Tim Slade and Anton De Pasquale, with the latter triggering the sole BP Ultimate Safety Car intervention of the race.

Waters made a clean start from pole, with Slade dropping from the front row to sixth.

It didn’t take long for drama to strike one of the hopefuls, with Scott Pye forced into the lane after contact with Jack Le Brocq exiting the Cutting on the first lap.

Will Brown, who crashed heavily in Practice 1, was making smart progress from 17th, rising to 10th by lap 4 following a clash between James Courtney and Andre Heimgartner at the final corner.

With the Safety Car taking control of the race, the majority of the field dived into the lane.

Van Gisbergen, Slade and Davison emerged ahead of Waters, who dropped to effective fourth following a long stop.

Waters took on 77 litres, but his team raised the bonnet, enabling the longer fuel stop. Whincup was forced to double stack, took on 83 litres and was buried in the midfield by the lap 10 restart.

He returned to the race, albeit five laps down, on lap 15. All the while, van Gisbergen stretched his legs in the lead, with Bryce Fullwood, who only took on 21 litres, rising to second after starting 12th.

Several drivers took advantage of the Safety Car period, with Le Brocq up nine spots into sixth, Reynolds up six spots in seventh, and Zane Goddard, who stopped on lap 6, up nine places.

Smarting after being forced to double stack, Whincup pressured Fabian Coulthard, who had jumped from 20th to 12th amid the pit stops.

Whincup made the move at the final corner at the end of lap 17, and was released into clear air.

At the end of lap 19, Walkinshaw Andretti United pulled Fullwood in from second, triggering the second round of stops.

Reynolds stopped one lap later from sixth, with Le Brocq, Hazelwood, Goddard and Heimgartner all stopped on the following lap.

The latter was slapped with a drive-through penalty for a dangerous release, with the #7 NED Whisky Mustang pulling outing front of Brodie Kostecki following an off at the first corner.

The front-runners began to blink; Davison pitted from third at the end of lap 26, two laps after Slade made his final stop.

On lap 28, van Gisbergen was brought in for his defining second stop, and emerged 11 seconds ahead of Davison, with Slade shadowing the #17 Shell V-Power Racing entry.

Mostert peeled in from the lead on lap 30, and filtered out with a six-second margin over Davison.

He managed to get the damaged #3 CoolDrive Mustang to safety, enabling the race to run green to the end.

Despite avoiding injury, a dejected Slade was shattered, cutting a forlorn figure beside his damaged car after a strong debut showing for his new Blanchard Racing Team.

All the while, van Gisbergen showed the mettle he demonstrated on the mountain to win the Great Race four months prior, sailing to a 41st career win.

Mostert threw down the gauntlet at the end, but it was to no avail with van Gisbergen crossing the line by 1.4s.

Davison was 18 seconds in arrears to clinch a podium on his DJR return, with Winterbottom pipping Fullwood to fifth.

Whincup shadowed Le Brocq to the line, with Courtney, Reynolds and Hazelwood rounding out the top 10.