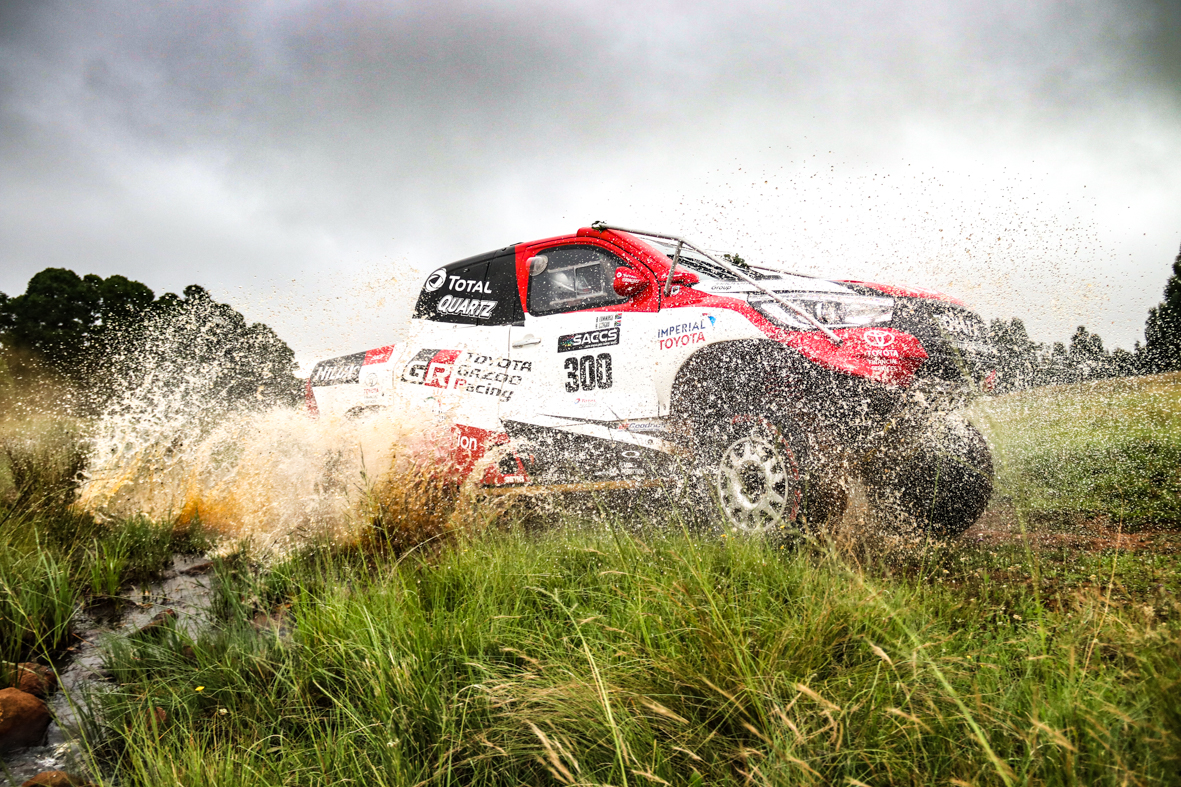 A great route and perfect weather welcomed competitors to the first of the two race days of the Mpumalanga 400, the opening round of the 2020 South African National Cross Country Series (SACCS) that takes place in the Dullstroom area this weekend. The rain stayed away during the 64km Qualifying Race on Friday, but it bucketed down later in the afternoon.

It was a good start for the defending overall and FIA Class champions, Henk Lategan/Brett Cummings (Toyota Gazoo Racing Hilux) who posted the fastest time (53min 11s) after a clean run. They find themselves in the situation that they will not have to deal with any possible dust on the route on Saturday morning, but they will have to open the road after the rain on Friday afternoon.

They were 29 seconds faster than their team-mates, Giniel de Villiers/Alex Haro (53min 40s) who will tackle the event from second place. De Villiers would like to win this event for the third consecutive year while it will be Haro’s second race in South Africa. The Qualifying Race podium was rounded off by Chris Visser/Danie Stassen (Total Excellium Toyota Hilux) who were caught up in slower traffic and dust 15 kilometres before the end. They were 47 seconds behind De Villiers/Haro and only 17 seconds ahead of the current Class T champions, Lance Woolridge and his new navigator, Elvéne Vonk (Ford Castrol Cross Country Ranger) who are now competing in the FIA Class.

The overall top five were rounded off by the third Toyota Gazoo Racing Hilux in the hands of Shameer Variawa and his new navigator, Dennis Murphy, who won this event next to De Villiers last year. They were only nine seconds behind the Ford (54min 59s) and like a few new pairings this season, Variawa and Murphy are also still getting to know each other.

With the first five places taken up by teams in the FIA Class, it was the Horn brothers, Johan and Werner (Malalane Toyota Hilux) who topped the Class T standings (55min 19s) after an uneventful outing. They were sixth overall and were followed by Ernest Roberts/Henry Köhne (Red-Lined Motorsport Nissan Navara) whose race went exactly as planned. Roberts/Köhne were sandwiched by Class T teams with Malcolm Kock and his son, Frans (Neil Woolridge Motorsport Ford Ranger) posting the second fastest time in this class (56min 06s), 47 seconds behind the Class T leaders.

The Kock father and son were only six seconds faster than the Brazilian team, Marcos Baumgart/Kleber Cincea (Ford Castrol Cross Country Ranger) who have also moved from Class T to the FIA Class with Gary Bertholdt/Siegfried Rousseau (Total Excellium Toyota Hilux) rounding off the Class T podium. Bertholdt and Rousseau (56min 54s) had to get used to each other again after not having raced together for five years. They trailed the Kock pair by only 48 seconds.

The Namibian rally driver, Thilo Himmel tackled his first SACCS event and together with Class S National Navigator Champion, Gerhard Schutte (Schalk Burger Motorsport King Price Xtreme), they got off to a positive start to finish 14th overall and 10th in the FIA Class (58min 13s). The team enjoyed the nice, tight route and a finish on Saturday, will add to their list of ‘firsts’ in the SACCS.

Brian Baragwanath returned to the SACCS scene and this time behind the wheel of a brand new left-hand drive Century Racing CR 6. To add to this new experience, Juan Möhr read him the notes for the first time. The team lost time with small technical issues and finished 11th in the FIA Class (58min 17s) while they were 15th overall. They were only three seconds ahead of Clint Weston/Gerhard Snyman in another FIA Class Schalk Burger Motorsport King Price Xtreme who lost time in the dust behind slower traffic. Jacques van Tonder/Sammy Redelinghuys (Neil Woolridge Motorsport Ford Ranger) experienced a few niggly issues and GPS problems, but they rounded off the top five in Class T (58min 37s) and finished 17th in the Production Vehicle category.

Ramon and his wife, Maret Bezuidenhout were a bit rusty while they are still getting used to the two-wheel drive FIA Class CR 5. They were 18th fastest followed by two more couples, former Special Vehicle champions, Marius and Jolinda Fourie (Ford Ranger) who are also competing in the FIA Class and Bernard and Minette Johnstone (Toyota Hilux). The Johnstone couple are only in their second season and again compete in Class T while Terence Marsh and Letshego Zulu (Red-Lined Motorsport Nissan Navara) will tackle their adventure from the back of the field.

With wet and slippery conditions on the cards for the Mpumalanga 400 main race on Saturday, interesting and exciting racing can be expected.