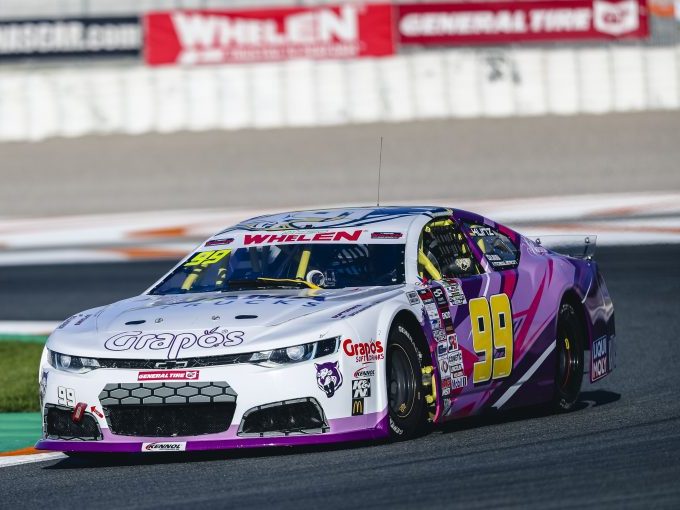 NASCAR Whelen Euro Series / Stephane Azemard
Alain Mosqueron is a two-time Club Challenge champion. The Frenchman was the most consistent driver in the two timed session of EuroNASCAR’s regularity-based challenge at Circuit Ricardo Tormo in Valencia, Spain. The DF1 Racing driver overtook Federico Monti at the top of the standings and successfully defended the title he won in the 2019 season. Not Only Motorsport’s Monti and Marko Stipp Motorsport’s Gordon Barnes completed the podium.
With a cumulative gap from the reference time of only 1.204 seconds, Mosqueron kept the strong momentum he earned in Grobnik. The DF1 Racing Tiger led both Club Challenge sessions at the Circuit Ricardo Tormo to open the NASCAR GP Spain in the best possible way for himself and the Austrian team.
“It feels great to win the title at the track where I drove my first race in 2019, I love this place! I knew that to beat Federico I had to drive two very good sessions. The pressure was high because Federico is a very good challenger, but we managed to be the most consistent and we made it,” said the Cherbourg native. “I’m going to celebrate with my family and of course my team, they did a great job and gave me a fantastic car.”
Monti ended up second in the overall standings after a solid debut season in the Club Challenge. The Italian led the classification ahead of the final event but was beaten by Mosqueron by just 4 points in a tight battle for the big trophy. Another rookie on the grid, Gordon Barnes was a cumulative 3.478 seconds off the reference time and ended up third both at the Circuit Ricardo Tormo and in the season’s classification. Frank Riedel and Thomas Blumberger closed the top-5 in the 2020 championship standings.
While the Club Challenge will be back in the 2021 season, the EuroNASCAR PRO and EuroNASCAR 2 championships will be decided with back-to-back events at the Circuit Ricardo Tormo. The NASCAR GP Spain will start this afternoon with Free Practice and Qualifying. All races will be broadcasted live on EuroNASCAR’s social media profiles (YouTube, Facebook, Twitch), Motorsport.tv and Kreator TV.