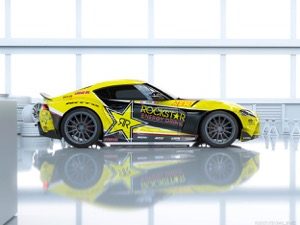 Mixed fortunes for Papadakis Racing at Dallas Formula Drift stop Ryan Tuerck, Fredric Aasbo battle for title heading into final rounds
DALLAS, Texas – It was a weekend of mixed fortunes for the Papadakis Racing Toyotas of Ryan Tuerck and Fredric Aasbo; both drivers are in championship contention as they head for the final competition weekend.
“After an incredible run this season where we’ve been on the podium at every round, we had a weekend of ups and downs here in Dallas this weekend,” said team owner Stephan Papadakis. “We’re going to go back to the shop and get ready to hit it hard at our hometown stop at the end of the month.”
On Saturday, Ryan Tuerck ran the competition ladder to the top in the Gumout / Nitto Tire / Mobil 1 Toyota Corolla Hatchback, earning his first win of the season at Texas Motor Speedway. He has shown remarkable consistency this year, earning four podiums in six rounds of championship competition. But a misstep during his battle with series newcomer Adam LZ on Sunday saw him eliminated in the quarterfinals. With two points-scoring rounds remaining in the season, he is in a tight battle for the points lead — just eight points behind Vaughn Gittin Jr.
Driver Fredric Aasbo will be looking to make a comeback in the Rockstar Energy Drink Toyota GR Supra at the season ending doubleheader. He was uncharacteristically tentative on the Dallas course, exiting both days in the quarterfinal round. With a win and a second place to his credit so far this season, he remains within striking distance of the title.
Texas saw multiple upsets throughout the weekend as drivers worked to adapt to a new reverse-direction course configuration that saw many struggle with blinding smoke in the final turns of the track.
Next, the series moves to Irwindale, California,  for the final doubleheader weekend of the year. “I’m confident heading into the finale,” said Papadakis. “Both drivers have brought home victories and we’re fighting at the top of the points. We have already proven the potential of this new team and we know we’ve got everything it takes to win. We’re going to give it our all at Irwindale.”
Irwindale Speedway, where the first professional drifting event took place in the United States back in 2003, is the spiritual home of the sport. It is often referred to as “The House of Drift.” Competition will take place under the lights, with the marquee Pro competition taking place Friday (Round 7) and Sunday (Round 8), and the Pro2 class on Saturday.
Taking a lead from other racing series including NASCAR and IndyCar, Formula Drift has implemented a host of safety precautions this season. The Irwindale venue will be closed to spectators but fans can tune-in to livestream competition all weekend, and catch up 1:1 with team members on their social media channels. >
Formula Drift competition is streamed live online across the series’ social media channels and this season has seen record Livestream tune-in and social engagement. Stream and content views for Rounds 3 and 4 achieved 3.7 million views on YouTube alone, and Formula Drift’s social media engagement has led all other major racing series in the USA.
Aasbo joined Papadakis Racing in 2011 and earned the series crown in 2015. He started his Formula Drift career in 2010 as a privateer in a Mark IV Supra and comes full circle this season in an all-new Toyota GR Supra.
Tuerck is a leading social influencer and top-tier driver with a career 18 podiums. His down-home charm, commitment to the sport’s grassroots, and talent in front of the camera have brought him a social fanbase of over a million followers. Earlier this year, he retired his previous chassis, a powerful Toyota 86.
The Papadakis Racing team began drifting in 2004 and is the most winning team in Formula Drift history, earning the 2015 title with driver Aasbo, as well as back-­to-back championship titles with driver Tanner Foust in 2007 and 2008.