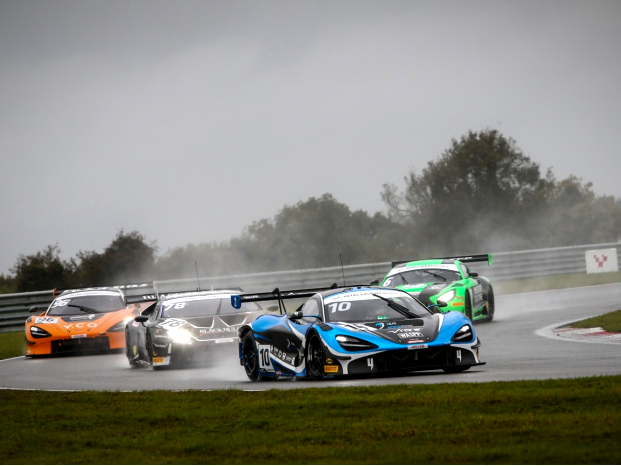 Mitchell/Witt make it seven winners in as many GT3 races

A race that began behind the Safety Car also witnessed a remarkable stint from Sandy Mitchell who took second from Optimum’s McLaren – shared by Ollie Wilkinson and Lewis Proctor – on the line. Barwell’s #78 Lamborghini, which Mitchell shares with Rob Collard, is now just one point behind RAM Racing’s championship leaders Sam De Haan and Patrick Kujala who finished fifth.

Soaking conditions proved no obstacle for the McLaren driver who dispatched front row starter Rob Collard and pole-man Sam De Haan on consecutive laps soon after the Safety Car was withdrawn. He then established a solid three-second lead over Optimum’s Lewis Proctor who took second when RAM’s Mercedes-AMG lost momentum while attempting to fight back against Witt.

The cars emerged from their pitstops a similar distance apart, but Jack Mitchell was able to steadily pull clear of Ollie Wilkinson en route to a 7.8s victory.

Optimum’s McLaren looked set for its best result since Oulton Park until an inspired Sandy Mitchell began tearing into Wilkinson’s advantage, which stood at 20s immediately after the pitstops. Barwell’s Lamborghini, spurred on by the chance to make up more ground in the championship, was right behind at the start of the final lap and out-sprinted the McLaren to take the chequered flag just 0.081s ahead.

Behind, De Haan handed his Mercedes-AMG over to Patrick Kujala in third place but immediately lost out to their primary championship rivals as a result of a 10s Success Penalty for winning at Donington. Instead, Kujala emerged just ahead of Yelmer Buurman who quickly found a way past his Silver-ballasted team-mate despite a lairy moment that almost cost both drivers dear.

While Buurman romped clear to claim the Pro/Am spoils with co-driver Ian Loggie, Kujala was left to defend from the rapidly advancing Andrea Caldarelli, who’d taken over from Michael Igoe. RAM’s Mercedes-AMG and WPI’s Lamborghini remained nose-to-tail – and frequently closer – thereafter as the Italian repeatedly looked for a way past. But Kujala resisted to maintain his and De Haan’s place at the top of the championship, albeit by just one point.

Barwell’s second Huracan faced an uphill battle after Adam Balon’s spin left Phil Keen at the tail of GT3. But last year’s double Snetterton winners fought back to finish seventh and limit the damage done to their title hopes.