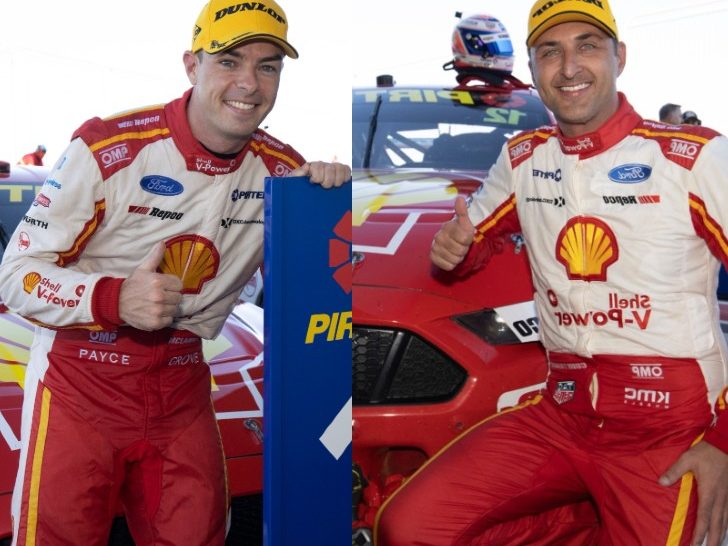 The Shell V-Power Racing Team took another haul of trophies at this weekend’s Repco Supercars The Bend. Following yesterday’s win by Coulthard, the team rounded out the weekend with a race win, two podiums, two pole positions and a round win.

In another intense race at The Bend where tyres were a key factor, McLaughlin finished on the podium in P3 and Coulthard just one sport behind in P4 in Race 26 at the Repco SuperSprint.

It was another strong qualifying session for the Shell V-Power Racing Team with McLaughlin claiming his 72nd career pole position, and Coulthard clocking a time quick enough for P4.

Coulthard had a blinder of a start off the line and almost detoured onto the grass to try and find a way around the cars ahead. Meanwhile, van Gisbergen took the clean outside line around turn one and managed to pass McLaughlin. At the completion of lap 1, the No. 17 and No. 12 Ford Mustangs were P2 and P3 respectively.

The pack stayed close during the opening laps, and Mostert showed his hand early by diving down the inside of McLaughlin and Coulthard from P4 on the second lap, but he failed to convert the move.

McLaughlin pitted on lap 6 and took on two new tyres but dropped back into the race behind Mostert. Coulthard made his stop on the following lap and rejoined the race behind Heimgartner, two spots behind his teammate. Coulthard was relentless in his attack on Heimgartner, and at one stage, the two made minor contact, but he couldn’t make a pass stick.

Van Gisbergen was one of the last cars to stop and when he rejoined he was neck-and-neck with Mostert and McLaughlin who were the race leaders. He slotted in behind the No. 17, but on fresher tyres, it wasn’t long before he made his move on McLaughlin.

When McLaughlin challenged Mostert for the position, Heimgartner took advantage of an opportunity to pass them both and bombed it down the inside to take P2. McLaughlin did overtake Mostert but was left in P3.

With 9 laps to go, Coulthard was in P5 and working to hold off Percat, but he couldn’t and dropped to P6. Five laps later, Coulthard was able to get Percat back and moved into P5 once again. He quickly closed the gap to Waters who had badly blistering tyres and was able to claim P4 with just two laps to go.

Mclaughlin closed the gap to Heimgartner but had to be content with P3, while teammate Coulthard crossed the finish line just one place behind in P4.

It was a dominant performance today by the Shell V-Power Racing Team with a 1-2 in the final race of the day at The Bend. In a carbon copy of qualifying for the previous race, McLaughlin again claimed pole position and Coulthard in P4.

It was another great start to Race 27 by both McLaughlin and Coulthard who were P1 and P2 as they entered the first corner; Coulthard up two places from his starting position. They wasted no time pulling a 2-second gap over the rest of the field.

Coulthard was the first of the Shell V-Power Racing Team Ford Mustangs to stop on lap 11 and rejoined in P13. McLaughlin had a gap of more than 8 seconds over the field when he pitted two laps later on lap 13. Little blistering evident on his used tyres boded well for his second stint. He rejoined the race ahead of his teammate.

With all stops completed and just 8 laps remaining, the No.17 and No.12 Mustangs were the race leaders with a comfortable margin in hand. They were never challenged with McLaughlin finishing P1 and Coulthard P2. Coulthard’s performance over the weekend also saw him named the round winner while McLaughlin was 3rd overall for the weekend.

McLaughlin leads the Supercars Championship by 215 points, while Coulthard moved up to P6. The Shell V-Power Racing Team extends their lead in the Teams’ Championship and is 104 points ahead of Triple 8.

“It’s been a good weekend for our side of the garage and to get a 1-2 means everyone in the team has done an awesome job. It’s a credit to everyone here and back in the shop. We can’t all travel as a crew as much as we normally would, but it’s a team effort.”

“I got ripping start in the first race today then got a blinder in the second one as well which basically set my race up. I’ve been working really hard on my starts, in fact, both Scotty and I have, and it seems to be paying off.”

“We were 1st and 3rd overall for the weekend and we got a 1-2 today which is fantastic for the team. For us, the car was fantastic to drive, it was just a pleasure to drive, and I’m really proud of everyone at the Shell V-Power Racing Team to be able to bounce back up here today. It was a fantastic day today.”

“Our tyres were great all weekend. I had a couple of little blisters but nothing like we have seen up and down pit lane. We changed our strategy today and changed two rear tyres instead of two sides, and then I just had to play with my bars to get balance. Once I got that, it was good.”