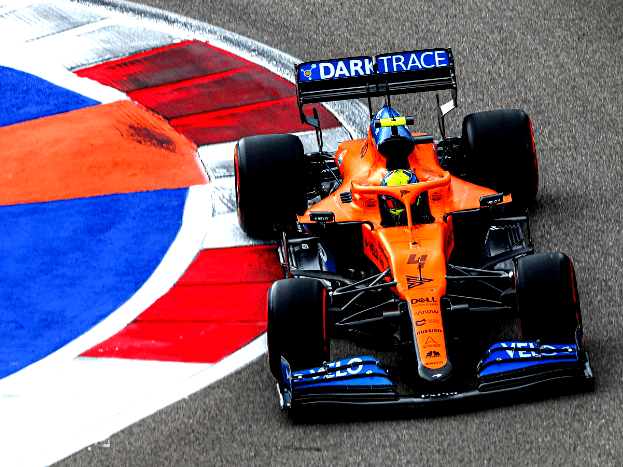 For any sports team, there are good days and bad. Occasionally, there are outliers at the extremes of that bell curve: the very, very good or… the 2020 Russian Grand Prix. This was our first non-scoring race of the season and a first since last year’s Mexican Grand Prix.

The team departed Sochi suitably humbled and more than a little shocked, reflecting on an event that promised a great deal lunchtime but came apart in increments thereafter. It’s a weekend everyone would like to forget – but one the team will have to remember. Here are a few things you may have missed.

(Not so) Hot Tub
Carlos had a new chassis. Or rather, an old one. After his crash in Mugello, Carlos went back to the chassis (no.2) he used for the first five races of the season. He swapped out of it when the team were investigating some cooling issues at the Spanish Grand Prix (for which it was blameless). Even without the Mugello crash, one of the drivers would have been in a new tub this week, as one was due for an aesthetic rotation through the paintshop. Carlos’ Mugello crash made the decision more straightforward, as that chassis required a little bit of rework after the heavy impact.

Mark, not Will
Lando’s side of the garage welcomed back an old face, with Mark Temple stepping in as race engineer. Will Joseph, Lando’s usual race engineer is sticking close to home with a baby on the way (and not, as Lando tweeted, because he missed the flight). Mark is Will’s predecessor on that side of the garage, having been race engineer for Kevin Magnussen and Fernando Alonso. Having had a spell running the simulator, these days Mark’s usually in Mission Control. Anyone listening in to the radio comms this weekend may have assumed his given name is WillSorryMark.

Challenges
Practice crashes haven’t really been on the radar in the garage for the last season and a half, so it was perhaps inevitable that, after Lando had one last time out at Mugello, Carlos would follow suit in Sochi. In common with any underused circuit, the surface at the Sochi Autodrom started the weekend very ‘green’, and that low level of grip causes many drivers problems on push-laps. Carlos took the rear end off his car in Turn Seven but was able to limp back to the garage. It only took his crew a few seconds to decide he was done for the morning, needing to have a damaged rear crash structure – and thus the entire rear end – replaced.

This is Not Mugello
There was some relief in the camp when the timing sheets made it obvious the car was performing much better than had been the case in Mugello. The Tuscan Grand Prix weekend had been tough, with the car struggling for pace compared to the rest of the upper-midfield pack. The question going to Sochi was whether that was a circuit-specific one-off or the beginning of a trend. After finishing FP2 in P4 and P5, and demonstrating good long-run pace, the team were collectively much happier and optimistic for a good result in Sochi.

The Trigger
When 2022 arrives and this generation of cars are consigned to the archives, they will be written up as the most sensitive in F1’s long history. It was certainly the case when the team ended FP3 looking very competitive with Carlos P3 on the timesheet – but lost performance while sitting in the garage in the two hours before qualifying. At the start of Q1, both drivers reported that the wind had changed since FP3 and strong tailwinds into Turn Two and Turn Five were taking the car out of the sweet spot. They qualified P6 and P8 – but Carlos, in particular, was disappointed with the showing.

Push to PAS
Cars retire for all sorts of reasons but the version that really makes a team hang its head is when one takes the other out. That didn’t quite happen on Sunday but it was very close, with Lando shipping damage from Carlos’ crash. After his pitstop and following the Safety Car, Lando reported a lack of the usual resistance in the steering when turning right. It was an energetic few minutes with the team scrambled to study sensor data, figuring out where the problem lay. The big worry was suspension damage, which would likely have forced a retirement. The records will say he finished 15th; they won’t say how monumental an effort that required.

Three Race Engineers
The only person the driver talks to during a race is his race engineer – but in the background, there’s a constant stream of communication between engineers, strategists, aerodynamicists, power unit and tyre specialists. One peculiarity of Lando’s race is quite how many people were fighting his corner. All of Carlos’ team – and Carlos, once he was released from the medical centre – were on the network, studying data, investigating strategy scenarios and looking at the opposition. Unusual this weekend was a discussion between Tom Stallard, Carlos’ race engineer and Will Joseph, Lando’s usual race engineer, working back at the MTC, discussing the driver rather than the car, and how Lando might be able to attack the end of the race if he stopped for fresh tyres.

Chasing Purple
After a great effort with an uncooperative car, Lando’s unlikely push for points ended with six laps to go. After a stout defence against Alex Albon and Pierre Gasly, the team opted to pit him from P11, dropping back to P15 on the road and tasked with taking the fastest lap. There’s no point available for fastest lap outside the top ten – but emphasising how tight the battle for third in the Constructors’ Championship is becoming, denying that point to Renault or Racing Point was reason enough to chase it. Lando put in a very good lap, with a purple final sector, but was pipped to the prize by Valtteri Bottas, galvanised to produce a lap beyond the reach of a midfield team – which in effect achieved McLaren’s aim.