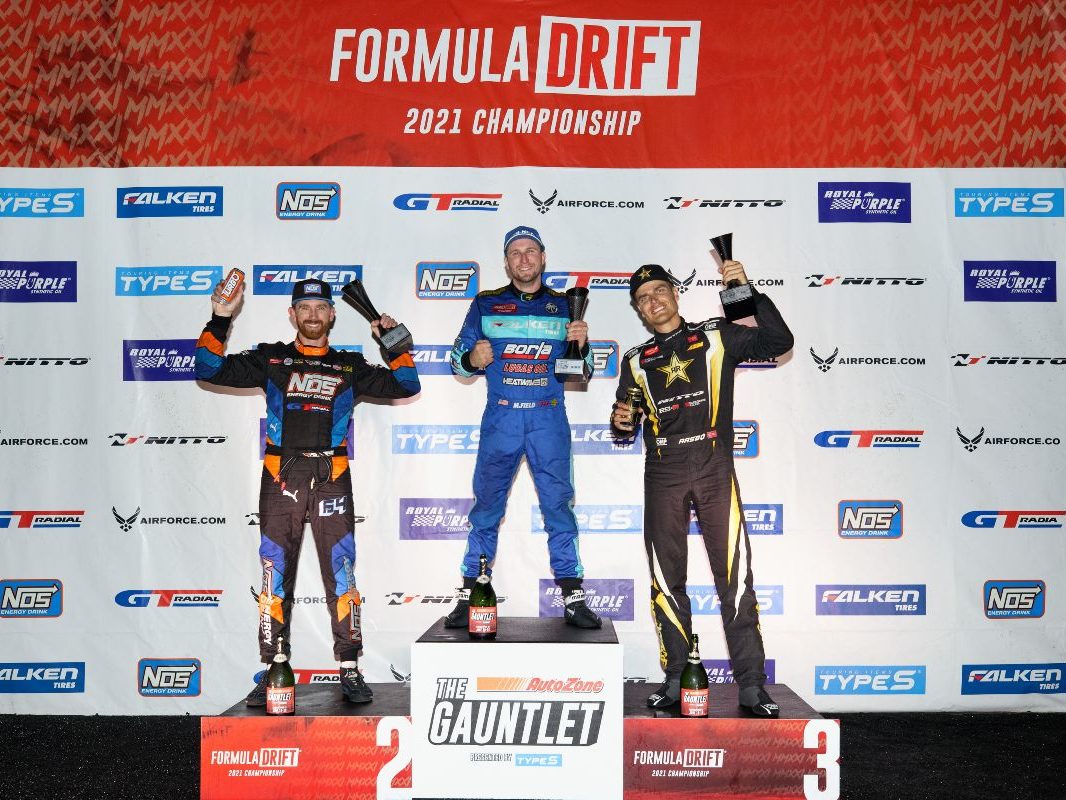 This is the first Formula Drift Pro win for Field since he began competing in the Corvette and 3rd event win since joining Team Falken. His last win was in 2016 at Irwindale.

“This is my first win in the Corvette, so it’s super meaningful to me,” Field said from the podium. “It really worked out, because it always gets harder when it rains, and we knew it was going to rain when we got here. This track seems to produce different surfaces when it’s wet and when it’s dry, so we made some changes to the car, but we just kept the Falken Azenis RT615K+ tires on it and the team told me to stay wide open.”

Three drivers moved on from Top 32 – round, with Field moving forward to his triumphant victory in the Finals.

As a result of Field’s performance – despite defeating his teammate Bakchis, who held the points lead in the Formula D Driver’s Championship coming into Englishtown – he moved to the top of the leader board. Bakchis remains in second, 26 points behind. Pawlak is in 8th and Yoshihara,19th. A victory in the series earns the winner 100 points. Falken Tires continues to hold the lead in the Tire Manufacturer Cup Championship.

“The course was absolutely amazing,” declared Steve Wong, Falken’s Supervisor, Passenger Car Motorsports & Events. “It was challenging to come out to a new course but paired with our Falken Azenis RT615K+ tires, Matt was able to make his way knocking off challengers to get to the top step. It was a great sight and the folks in New Jersey got to see an incredible evening of drifting done right.”

Field also gave a strong note of appreciation to the fans. “Winning here feels better than my first win because all my heart, my joy, my soul is poured into this Corvette,” he said. “And I can’t thank the fans enough. When I got to the start line for the final run, all the phones were lit up in the stands. I could see that from the wheel, and it means a lot. Hopefully, there will be more wins to come.”