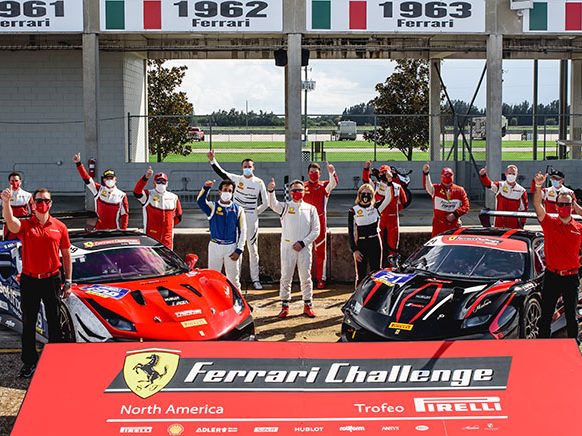 Sebring, Florida – Ferrari Challenge Trofeo Pirelli completed its 2020 North American season with two newly crowned champions at Sebring International Raceway. Cooper MacNeil (Ferrari of Westlake) took his third consecutive class championship while Justin Wetherill (Ferrari of Central Florida) took his first series championship in the Coppa Shell Am category. Meanwhile, the rest of a 40-car strong grid reveled in the classic challenge offered by Sebring’s historic layout while also enjoying a special guest appearance from John Doonan, President of IMSA, who made a special trip to Florida immediately after the IMSA race in Charlotte had concluded.

MacNeil and Wetherill are crowned champions.

Cooper MacNeil claimed his third consecutive Ferrari Challenge championship with a sterling drive in difficult conditions.. Capping off a season that ultimately featured 10 wins and a perfect 12 pole positions from 12 chances, MacNeil was consistently in a class of his own through the 2020 season. Wetherill’s championship aspirations were only realized after the Ferrari of Central Florida driver took the win in the final North American race of 2020. Similarly to MacNeil, Wetherill rarely put a wheel wrong, ending up on the podium 10 times out of 12 opportunities. With only two pole position starts through the season, Wetherill also demonstrated his racecraft as he frequently worked his way forwards through the largest category in Ferrari Challenge competition.

Trofeo Pirelli. While Cooper MacNeil (Ferrari of Westlake) earned his third championship with a second place finish, Enzo Potolicchio (Ferrari of Central Florida) claimed the win as mixed conditions forced the field onto wet tires for the 30-minute contest. Potolicchio demonstrated fantastic aptitude for the situation, charging his way fearlessly forwards and hounding MacNeil until ultimately he was able to pass around the outside in the fearsome turn 1. MacNeil got his revenge, in a race run on Pirelli slick tires, qualifying on pole by a significant margin and then checking out from the rest of the field from the moment the green flag flew.

From there, he went on to develop a 13-second lead by the time the checkered flag fell, 30 minutes later. In Trofeo Pirelli AM, Jason McCarthy (Wide World Ferrari) took a pair of wins at Sebring International Raceway, bringing him within 16 points of the category leader heading into the Finali Mondiali. The podium was completed by Claude Senhoretti (Ferrari of Ft. Lauderdale) and Jean-Claude Saada (Boardwalk Ferrari) on Saturday, while Brent Holden (Ferrari of Newport Beach) and championship leader Dave Musial (Ferrari of Lake Forest) filled out the podium.

Coppa Shell. Brad Horstmann (Foreign Cars Italia) reinvigorated his championship aspirations by taking back to back wins in the Coppa Shell class, driving him into the lead of the most competitive class in Ferrari Challenge. Three drivers remain within nine points of each other at the end of six rounds of action, meaning the deciding races will take place as part of the Finali Mondiali celebration at Misano in November. Jim Booth (Ferrari of Atlanta) and Ian Campbell (Ferrari of Denver) rounded out the podium while Jay Schreibman (Cauley Ferrari) and Kevan Millstein (Ferrari of San Diego) took their turns in second and third respectively on Sunday. In Coppa Shell AM, Justin Wetherill secured his 2020 class title with a second place finish on Saturday and a win on Sunday. Saturday’s win was taken by Chris Aitken (Ferrari of Houston), his first in the championship, and the podium was rounded out by Michael Watt (Ferrari of Atlanta) in third. On Sunday, with Justin a race winner and crowned champion, the podium was completed by Chris Aitken and Todd Coleman (Ferrari of Denver) in second and third respectively.

Schedule. With the North American leg of Ferrari Challenge concluded, racers continue to the Finali Mondiali at Misano World Speedway on November 5-8