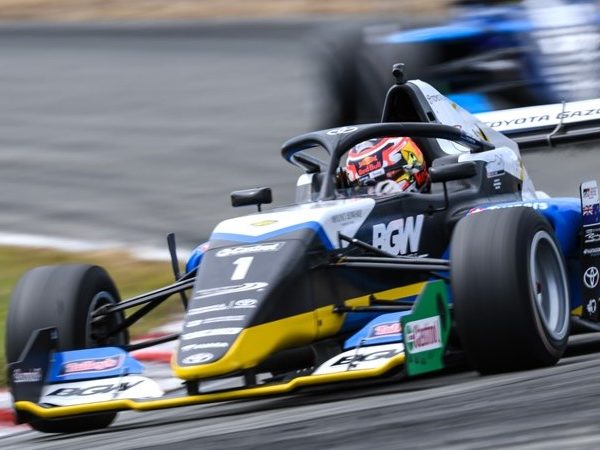 New Zealand’s Liam Lawson completed a solid weekend that hadn’t got off to the greatest of starts with a lights-to-flag victory in the feature race at the second round of the Castrol Toyota Racing Series at Teretonga Park on Sunday.

Second on the grid, Lawson timed the start in his Toyota FT-60 to perfection and simply drove away from pole position holder Jackson Walls as the red lights went out. Walls had no option to tuck in behind and focus on the challenges from behind, which were led by the fast starting Igor Fraga from the second row. Lawson maintained his lead throughout the 25 laps and bagged a Teretonga lap record for TRS on the way, but it wasn’t all plain sailing for the Kiwi.

“We made a great start but we did have a clutch issue from the first race so we had to be careful,” he said. “It was nice until about half way through the race when we had a moment where the power dropped, I was freaking out but it came back. We have no idea what the problem was but thankfully it sorted itself out.”

The win left Lawson’s points advantage in the championship to 14 points over Igor Fraga, with Saucy sitting third in the standings.

The start of the race saw Oliver Rasmussen begin what was to turn out to be fairly wild race for the Danish mtec Motorsport racer. He ran wide on the exit of turn 1 and had to rejoin in the thick of the mid-field action. Luckily there was no consequence and the field was able to continue in full.  The opening first couple of laps hadn’t gone too well for Jackson Walls either. Dropped by Lawson away from the lights, he set off after him and then made a decent error through Teretonga’s tricky Castrol corner on the second lap and was lucky to only lose two places to Fraga and Yuki Tsunoda, who was up with the leaders after two races at the track lurking in the mid-field.

Wall’s wild ride had left Lawson and Fraga behind him with a big lead over Tsunoda and by the half way mark this had grown to a whopping six seconds, a reflection of the near record breaking pace the two leaders were able to sustain. Fraga was far from beaten at this stage, however, and after a series of laps quicker than Lawson, closed the gap dramatically when Lawson momentarily lost power on lap 11. If there was a moment in the race when Lawson looked vulnerable, it was this one but the champion kept his head, forgot about the problem and responded by lapping at least as quickly as Fraga for the next three laps before bagging a new TRS lap record.

That late burst of speed effectively ended Fraga’s challenge and Lawson was able to cruise home to win, no doubt relieved after the problems in the race and a frustrating start to the weekend with a poor qualifying performance on Saturday morning for the first race.

A late Safety Car when Rasmussen made a mess of a passing attempt on Sunday morning race winner Emilien Denner and sent both off at turn one into the gravel proved immaterial as there was only one lap to go – leaving Lawson to take flag at a leisurely pace behind the Safety Car.

Fraga showed his talent by never giving up on the chase and Tsunoda, team mate to Lawson and the branded Red Bull Junior for the series, and took a solid if unspectacular third place ahead of Walls.

The battle behind the top four was the best of the race with Saturday winner Caio Collet eventually coming through to grab fifth spot after starting seventh. A great pass on Grégoire Saucy was a highlight for the Brazilian in a weekend of far better fortune than the first round.

Saucy put in another solid performance for sixth while Lucas Petersson had to be satisfied with seventh from his fourth place on the grid. Franco Colapinto was in the top ten yet again for Kiwi Motorsport in eighth. Jose Blanco and Petr Ptacek completed the top ten after enjoying some closely fought racing in the mid field battle pack.