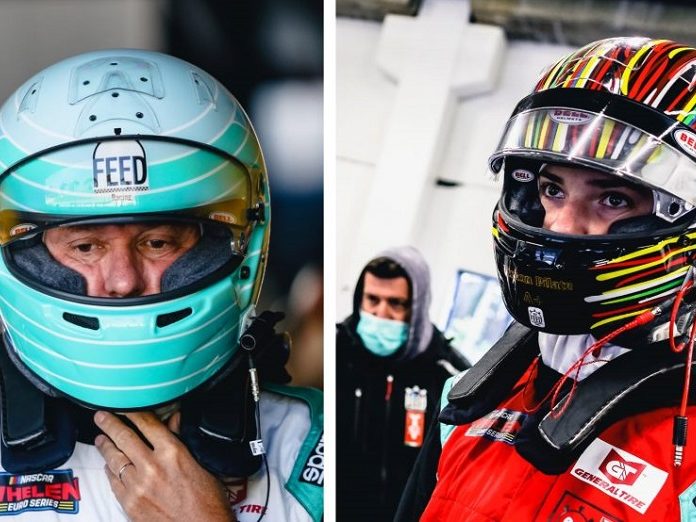 After a successful 2020 season, DF1 Racing will aim for the title in both NASCAR Whelen Euro Series championships in 2021. The Austrian team announced that Patrick Lemarié and Simon Pilate will become DF1 Tigers and share the #66 Chevrolet Camaro.

Simon Pilate proved to have very high potential in his very first NASCAR season. The 18-year-old Belgian finished 8th in points in EuroNASCAR 2 and fourth in the Rookie Trophy, grabbing his best career result at Valencia with a fourth place overall. With one full season under his belt, Pilate wants to compete for the title in the EuroNASCAR 2.

“2020 was an amazing year for me, as it was my first ever year in car racing. With the help of FeedVict, Patrick Lemarié and Jacques Villeneuve I was able to learn an incredible amount of information quickly. Thanks to their help, I rapidly got used to the car and performed”, Pilate said. “Finishing the season with two rookie podiums, I was ready to continue for the next season. It is with great pleasure that I found this opportunity with DF1 Racing. They are very competitive and I can’t wait to continue this adventure with them and my mentor Patrick Lemarié. I am now working hard to be on top for the first race and to fight for the win. I know that the team will do everything they can to put me in the best position and I will do my best to finalize.”

Patrick Lemarié grabbed two top-10 finishes in EuroNASCAR PRO in his return to racing after a long hiatus. The eclectic Frenchman, who founded the Feed Racing academy with Jacques Villeneuve, is looking forward to his second season in the NASCAR Whelen Euro Series. He will once again mentor Pilate while battling with the best NASCAR drivers in Europe.

“It is with great enthusiasm and a very high motivation that I am very pleased to announce my engagement with DF1 for this season”, said Lemarié. “After 17 years without racing, my friend Jacques Villeneuve got me out of my retirement in 2020, and I had great pleasure driving in the NWES Championship. I would like to thank team FeedVict for the past season, my racing appetite is back again, and I am focused on performing well in 2021 and helping my young protégé Simon Pilate, who is very talented, to win the EuroNASCAR 2 title. Norbert (Walchhofer, DF1 Racing Head of Motorsport) and I met when we both were still racing.”

The #66 DF1 Racing camaro will make its virtual debut next Tuesday in the EuroNASCAR Esports Series with Simon Pilate at the wheel.

“I’ve remarked the great potential of Simon Pilate in the season 2020 and I was surprised and pleased when Patrick Lemarié, whom I met when I was still racing myself, contacted me. Now both will join DF1 Racing and drive our #66 in 2021”, said Norbert Walchhofer, Head of Motorsport at DF1 Racing. “Simon will already participate in the official ENES championship with our new DF1 design and start hunting points for the real championship. We won the title in the ENES in 2020 and our goal is to defend the title. I’m sure that with Simon, we will have a good chance.”