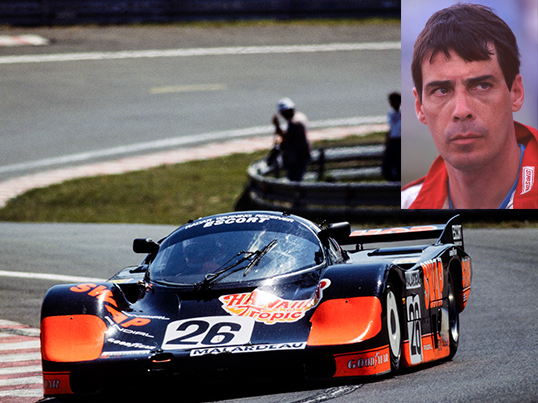 Paul died Tuesday at the age of 60 following a lengthy battle with Huntington’s Disease, a fatal disorder that causes the breakdown of nerve cells in the brain and deteriorates physical and mental abilities.

At 22 years old, Paul was the youngest driver to claim the GTP championship in 1982. He twice won the Rolex 24 At Daytona (1982 and 1997) and added a victory in the Mobil 1 Twelve Hours of Sebring Presented by Advance Auto Parts in 1992.

“The IMSA family is very saddened to learn of the passing of John Paul Jr. today,” IMSA president John Doonan said in a statement. “John was an amazing talent and was usually seen battling (in a four-wheel drift) at the very front of the field, especially in his 1982 championship season.”

Paul transitioned from IMSA to Indy cars, and in 1983 won the 500-mile race at Michigan International Speedway, passing Rick Mears on the final lap. Among the drivers who chased Paul to the finish line that day was Bobby Rahal, co-owner of BMW Team RLL, which recently completed its 12th season in the IMSA WeatherTech SportsCar Championship.

“He will always be remembered as an enthusiastic, fun and strong competitor whether he was racing at the Indy 500 or at an SCCA National race,” Rahal said in a statement. “His goal was always to do his best, and that’s what he did.”

Paul stopped racing after the 2001 season when he began noticing symptoms of Huntington’s. His mother and grandmother had died of the genetic disease.

In a video produced for UCLA, Paul explained how the disease first began to affect him.

“It was starting to invade my racing,” he said in the video. “I was having to actually talk my way around the track in segments, basically. I was having to tell myself to turn, accelerate (and) brake instead of it just flowing.”

The video was included in a 2014 Indianapolis Star story written by Curt Cavin, who visited Paul at his California home and described his struggle with the disease.

“He didn’t always have the best equipment, but I never, ever, ever heard him complain about anything; he just went out and drove his heart out.

“But more than all the race car stuff, I knew him to be a great person. He’d always ask (my wife) about the kids and how she was doing. He was just a caring person.”

Doonan as well had a vivid memory, recalling when he watched Paul race at Road America during the 1982 championship season.

“He switched to the red and white No. 18 JLP-4,” Doonan said. “I was able to watch that race with my father sitting on Fireman’s Hill outside of Turn 5. I was finally able to meet John in person for the first time at the Long Beach IMSA race during the last decade. He struck me as a very kind man.

“John battled Huntington’s hard in recent years – frankly, with the same effort and energy that he demonstrated on track. You will be missed, John Paul.”

Paul’s foundation, the John Paul Jr. Huntington’s Disease Foundation, continues to raise money for UCLA’s Department of Neurology in its research efforts. The foundation’s GoFundMe account can be found here on their Facebook page.