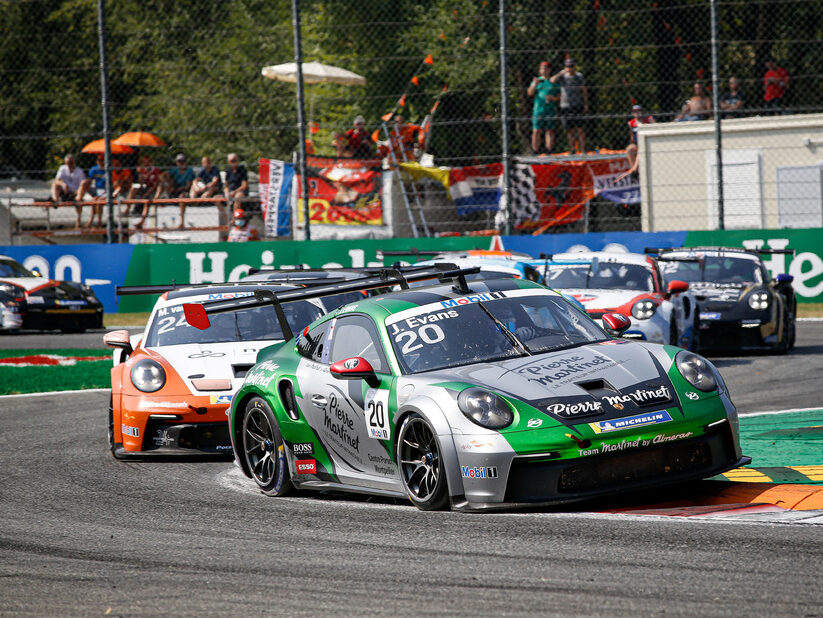 Third place at the penultimate round of the season was enough for Larry ten Voorde to secure the championship title in the Porsche Mobil 1 Supercup for the second time in a row. The Dutch driver from the GP Elite team crossed the finish line on the Formula 1 racetrack in Monza behind the Turkish Porsche Junior Ayhancan Güven from the BWT Lechner Racing squad and Dorian Boccolacci with 2018 Porsche Carrera Cup Australia Champion, Jaxon Evans, finishing fourth.

“I didn’t want to take any risks. Jaxon Evans was the only person I had to watch out for,” reported ten Voorde. Before the start of Round 7, the New Zealander from the Martinet by Alméras squad, who ranked second in the standings was the only driver with a chance of catching ten Voorde heading into the Monza event. However, fourth in the seventh race and seventh in the final race on Sunday for Evans, saw the Dutch driver crowned champion

Ten Voorde crossed the finish line in first place at the final round of the Porsche Mobil 1 Supercup for the fourth time this season. Taking up the race from pole position, the Dutchman from the GP Elite squad claimed a convincing victory in the final race of Porsche’s international one-make cup. Scoring second place, Laurin Heinrich secured the rookie title. Driving for the Nebulus Racing by Huber team, the German only just managed to beat Ayhan-can Güven (BWT Lechner Racing). With third place, the Porsche Junior from Turkey defended his third ranking overall in the series.

“A great race. The duel against Laurin Heinrich over the first few metres was fantastic – we both allowed each other enough space. About halfway through the race Dorian Boccolacci put me under pressure but I think he was a bit too tough on his tyres. This is the perfect conclusion to a great season for me and the best way to thank my GP Elite team,” said Larry ten Voorde, giving a rundown of the season finale.

While ten Voorde maintained a convincing lead to the flag, in his slipstream a battle unfolded between Heinrich and Boccolacci for second place. After two braking errors, the Frenchman from the Martinet by Alméras squad finally had to relinquish his spot to the German, and ultimately to Güven and his compatriot Florian Latorre (CLRT).

Heinrich, who had taken up the race from the second grid spot, was ecstatic: “My start was awesome and I was able to attack Larry as we headed into the first chi-cane. But then I pulled back because the rookie title was more important. I also put too much stress on my tyres in Larry’s slipstream. Still, at the halfway point, my tyres were in better condition than Dorian’s and I overtook him again,” stated the 19-year-old from the German city of Würzburg.

The Pro-Am category went to Nicolas Misslin from Monaco for the sixth time in a row. The seasoned specialist from the Lechner Racing Middle East team had already claimed an early championship title in this category. Claiming eighth place at the final round of the season, Voorde’s compatriot Max van Splunteren narrowly sealed the overall victory in the team classification for his GP Elite squad.

* placed ahead of Heinrich due to better results from individual races