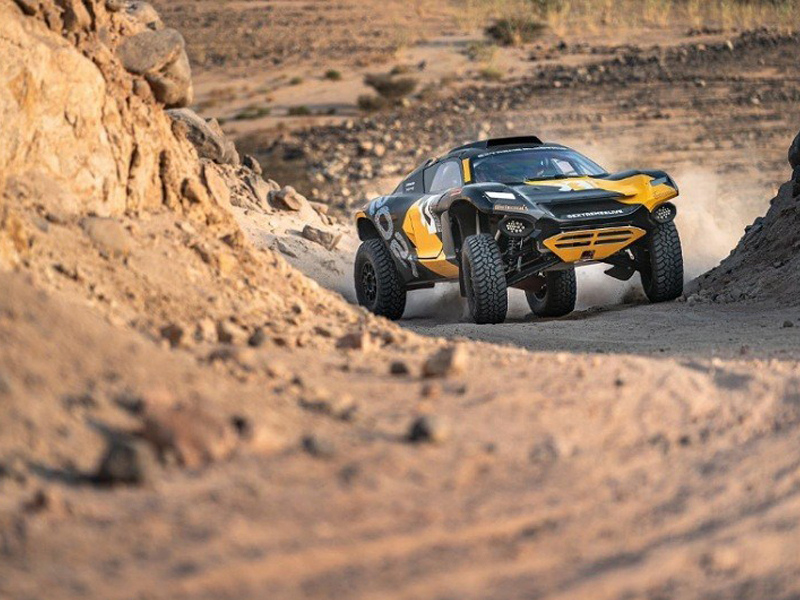 Ken Block will be testing and driving the all-electric Odyssey Extreme E E-Suv at the Dakar Rally. Joining other future alternatives like E-Bikes, E-Trucks and hybrid cars, Block has been invited by Extreme E to enter the last 20 kilometres of the Dakar Rally.

“Dakar is always something I’ve been interested in experiencing so this is a great opportunity for me to come and see what makes the race so special. I appreciate the guys at Extreme E inviting me out”, Block said.

‘Hoonigan’ is internet renowned for his drifting exploits along with forays into FIA World RX and WRC, but Ken Block’s experience on gravel and tarmac sets him ready for the sands of Saudi Arabia’s Dakar Rally and the possibility of new and exciting race classes .

“We encourage the participation of hybrid and electric vehicles in future events, with an objective of introducing a specific class for them.” David Castera, Dakar Rally Director added.

Freeskiing World Champion and World RX driver Guerlain Chicherit has made the appearance on the curtain-raising shakedown in Saudi Arabia with same vehicle and now Block will take over to help with collecting all critical data and development needed for Spark Racing Technology before the Extreme E season starts next year.

“Extreme E’s presence here, along with world-class drivers Guerlain Chicherit and Ken Block, convinces us that we are heading in the right direction with this project, and inspires us to go even further and faster in our implementation of alternative energy vehicles in future Dakar Rally events.”

“With a huge amount of off-road experience under his belt, Ken is an ideal driver to steer our machinery through the toughest terrain at one of world’s most iconic motorsport events.” Alejandro Agag, Founder and CEO of Extreme E said.