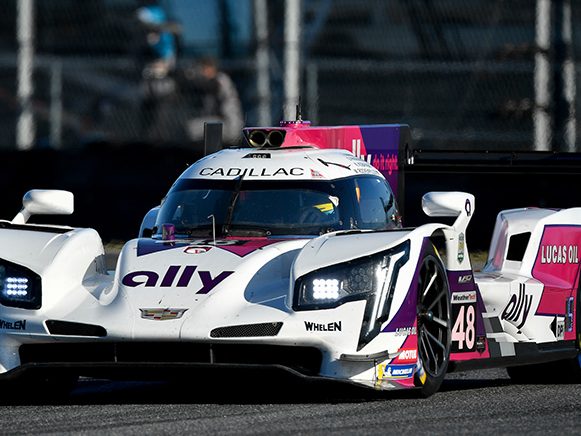 After a long day turning practice laps and learning the historic Sebring International Raceway circuit recently, seven-time NASCAR Cup Series champion Jimmie Johnson was absolutely excited and encouraged about his return to the track when he makes his Sebring debut this week in the Mobil 1 Twelve 12 Hours of Sebring Presented by Advance Auto Parts.

Yes, he acknowledged, the grand, time-worn Sebring course has its own “characteristics” and demands. And yes, he said, there was absolutely a legitimate learning curve.

But at the end of the practice day, it was evident in Johnson’s voice that he was excited to return for his maiden 12-hour race with the No. 48 Ally Cadillac DPi team, which finished runner-up in the IMSA WeatherTech SportsCar Championship season-opening Rolex 24 At Daytona in January.

It was such a stellar outing at Daytona, in fact, the team has announced it will contend for the 2021 IMSA Michelin Endurance Cup competing in all of the series’ endurance races – Sebring, the Sahlen’s Six Hours of The Glen at Watkins Glen (N.Y.) International and the 10-hour Motul Petit Le Mans at Michelin Raceway Road Atlanta, in addition to the Daytona 24-hour race.

Action Express continues to run the program with support from members of Johnson’s former NASCAR team, Hendrick Motorsports. Ally remains as the car’s sponsor for the events.

“I can recall the drivers of the (No.) 48 car and team management just talking about it at the very first test session, just how much fun we had as a group,” Johnson said. “Like, if we run good, maybe we can make this happen for the other endurance races, and it was just kind of talked about among us, the drivers.

“Then literally going to the airport following the Rolex race, the CEO and CMO of Ally said, ‘We need to talk to you tomorrow, this is amazing.’ Mr. (Rick) Hendrick is like, ‘We need to do more of this. This is amazing.’ And Jim France (IMSA and NASCAR Chairman) saying, ‘How can we make this happen?’

“So literally Sunday afternoon (the day of the Rolex 24 finish) and then Monday morning before eight o’clock – before I had my kids dropped off at school – I had a pretty darn good idea it was going to happen. There was a lot of momentum. Everybody kind of felt the same. There were some things to iron out, but the real momentum was there and everybody wanted to make it happen.”

The No. 48’s driver lineup also includes IndyCar champion Simon Pagenaud and two-time Rolex 24 winner Kamui Kobayashi for the remaining three races. Pagenaud was with Johnson at the recent test, helping the Sebring rookie get acquainted with the course and fine-tuning the car.

“I’ve actually learned a lot of things watching him on Sundays when I wasn’t racing,” Pagenaud added. “I just really like the guy and I think our personalities are very alike.

“There aren’t that many seven-time champions in any sport. It’s just phenomenal, so you can only draw respect from what he’s done, the moves he’s made at the track and that only attracts respect from me.”

The extension of Johnson’s sports car calendar is in addition to a busy IndyCar Series debut for Chip Ganassi Racing starting in April. Johnson will contend for rookie of the year competing in the non-oval races. Between testing the sports car and getting to know the IndyCar, Johnson has had a busy offseason since stepping away from full-time NASCAR racing in November.

“I think five years ago, my post-NASCAR plan was IMSA and potentially some WEC (World Endurance Championship) races were on the list,” Johnson said. “But this (IMSA endurance racing) has kind of been in my head for a long time. Being able to compete for an endurance championship this year has been a goal and a direction I have wanted to head in for years. It just all happened a little sooner than expected.”

Johnson said he has limited experience at all three of the upcoming endurance tracks – participating in an SCCA one-day event on Sebring’s full course about 15 years ago, competing previously in the six-hour race at The Glen (finishing sixth in 2010) and testing a NASCAR Cup Series car at Michelin Raceway. They are all iconic tracks and events, which has Johnson genuinely looking forward to the opportunities.

At Sebring this week, the future NASCAR Hall of Famer will add another significant piece of history to his list of achievements and join a top-shelf list of motorsports legends. From Phil Hill and Sir Stirling Moss to Mario Andretti and A.J. Foyt. From Al Holbert and Hurley Haywood to Geoff Brabham and Tom Kristensen, the Twelve Hours of Sebring is its own perpetual Hall of Fame entry list – one that Johnson already appreciates and embraces. And now he will be a part of it.

The 69th Mobil 1 Twelve Hours of Sebring Presented by Advance Auto Parts takes the green flag at 10:10 a.m. Saturday. Live television coverage starts at 10 a.m. on NBCSN, moves to the NBC Sports App and NBCSports.com at noon and returns to NBCSN at 7 p.m. for the concluding hours. Complete flag-to-flag coverage is also available on TrackPass on NBC Sports Gold. IMSA Radio coverage airs on IMSA.com and SiriusXM Radio (Sirius channel 216, XM 392, Internet 992). Tickets can be purchased at SebringRaceway.com.