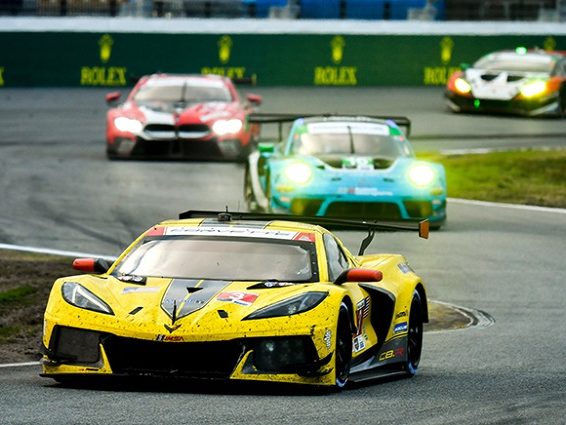 With Corvette Racing planning to field a pair of works entries throughout a season that will see the C8.Rs vie with WeatherTech Racing’s privateer Porsche 911 RSR-19 for class honors (plus appearances by a pair of BMW M8 GTEs from BMW Team RLL in the endurance events, along with Risi Competizione’s singleton Ferrari 488 GTE), it’s fair to say GTLM circa 2021 is a shadow of its former self.

Two seasons ago, no fewer than eight works cars (from BMW, Corvette, Ford and Porsche) along with the Risi Ferrari slugged it out in GTLM from the Rolex 24 At Daytona to the Motul Petit Le Mans. However, shifting corporate priorities – some as the result of the global pandemic – saw BMW dramatically reduce its GTLM involvement, Porsche reduce its footprint to customer support for the No. 79 WeatherTech Porsche effort and Risi cut back to selected events, even as Ford bowed out altogether.

In contrast, the visually similar GT Daytona (GTD) class has flourished with no fewer than nine manufacturers (Acura, Audi, Aston Martin, BMW, Ferrari, Lexus, Lamborghini, Mercedes-AMG and Porsche) represented and double-digit entries expected for each and every event on the 2021 WeatherTech Championship calendar – including standalone GT events at Lime Rock Park and VIRginia International Raceway.

Some might see the elimination of the GTLM class as IMSA embracing a lower common denominator at the expense of state-of-the-art technology. In my opinion, the decision is better viewed through the lens of history; one acknowledging that adjusting regulations in step with changing economic conditions and an evolving automotive industry is engrained in IMSA’s DNA.

That flexibility harkens back to the principles on which John and Peggy Bishop founded the International Motor Sports Association in 1969 with support from NASCAR’s Bill France. The Bishops (like France) understood a sanctioning body’s first allegiance was to its competitors rather than to a calcified rule book, or to those charged with enforcing it.

Thus, in IMSA’s formative years, its scrutineers charted a “live and let live” course. Although they hardly followed a “run what ya brung” mantra, neither did they enforce the letter of the law to the point that competitors were sent packing for picayune infractions that produced no performance advantage. Instead, they duly noted when a car was not, strictly speaking, legal and said, in effect, “We’ll let it slide this time but next race it’ll be legal. Or else.”

Years later, after the top of the GT pyramid – the GT1 class – attracted just two entries from Corvette Racing in 2009, IMSA eliminated the class and focused on what had been known as GT2. The renamed GT class produced some of the fiercest competition in years with BMW, Ferrari, Porsche and Corvette supporting programs to one degree or another, and each marque scoring one or more victories the following season.

Similarly, when Le Mans Prototype 1 (LMP1) and 2 (LMP2) fields were gutted by the exit of Acura, Audi and Porsche in the face of a global recession, IMSA added the Le Mans Prototype Challenge (LMPC) class to the mix. While some bemoaned the loss of innovation embodied by the Acura ARX-01B, Audi R10 and R15, and Porsche RS Spyder, nothing IMSA could have done would have brought those splendid machines back. Instead, the LMPC’s spec Chevrolet-powered ORECAs added much-needed numbers to the prototype field as well as an extra dimension to the competition, not to mention providing new and emerging race teams a pathway to IMSA’s premier series.

In January, 2021, the prototype ranks at the Rolex 24 were bolstered by the addition of more than half a dozen Le Mans Prototype 3 (LMP3) entries. It’s a move that, together with the Daytona Prototype international (DPi) and LMP2 classes, saw 24 prototypes take the green flag. Not unlike the LMPCs of days gone by, LMP3s do more than just “add numbers” to the field. They create an extra level to the competition and enable some teams to compete in both the WeatherTech Championship and the IMSA Prototype Challenge, the development series that runs LMP3s exclusively. Talk about “competitor friendly.”

It’s not surprising then, that the announced consolidation of the GT classes for 2022 elicited an encouraging response from competitors. Most notably was the reaction from Corvette, the only GTLM marque not already involved in GTD. While stopping short of committing to GTD PRO, Mark Stielow, General Motors’ Director of Motorsports Competition Engineering, called IMSA’s decision “a positive move forward for the future of professional GT racing in North America.”

A bevy of details remain to be worked out for the new GTD PRO class. Will rules afford the cars extra performance to separate them from their GTD competition, or will any performance differential be left to the two (or more) bona-fide professionals at the wheel of the GTD PRO entries compared to GTD’s mix of professional and gentlemen drivers? Also, the GTLM cars need just a few tweaks to comply with the 24 Hours of Le Mans and FIA World Endurance Championship GT Pro rules; not so for the GT3-spec GTD cars, which are ineligible for Le Mans or the WEC.

There’s time enough to sort those details in the 11 months before the green flag waves on the 2022 WeatherTech Championship season. Meanwhile, it’s safe to say John and Peggy Bishop and Bill France would wholeheartedly endorse IMSA’s new GTD PRO class.