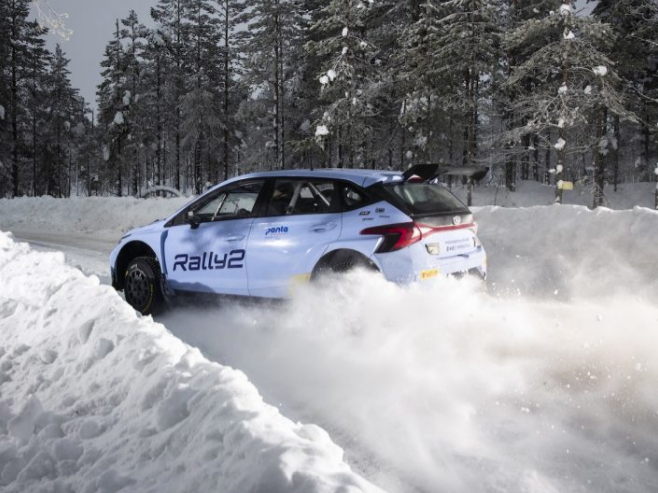 Solberg joined Craig Breen, one of his points rivals during last season’s FIA European Rally Championship, for a development test in Sweden recently.

They covered more than 600 kilometres in the Hyundai i20 N Rally2, which is set for ERC use later this season following its planned summer homologation.

Marking the first try-out of the i20 N Rally2 this year, Hyundai Motorsport Customer Racing department’s engineers used the four-day test to work through damper and differential settings.

The data gathered will be put to further use when gravel testing continues in the coming months, while “the information will be shared with the team of designers as they work to finalise components ahead of the homologation process” according to Hyundai Motorsport, which has also confirmed orders are being taken for the car.

Solberg, whose early season victory double was pivotal to his 2020 ERC1 Junior title success over Grégoire Munster, said: “The Hyundai i20 N Rally2 felt really nice to drive. Hyundai Motorsport is taking real steps with this car and already the traction and handling are very good. It’s really clear to see that Hyundai Motorsport is all-in to make a winning Rally2 car and it’s going to be super-cool to be part of the process of taking it to the homologation and competition stage.”

Andrew Johns, Hyundai Motorsport Customer Racing Operations Leader, added: “The development schedule of the i20 N Rally2 is running as planned. The kilometres completed over the four days will help push forward the development started on gravel stages last year. Over the next few months our engineers will continue to test, using different drivers to gain a wider range of feedback about all aspects of the car. The final package we offer to customers will be a superb all-round proposition.”

With their latest testing commitments complete, Breen and Solberg are now preparing for this week’s Arctic Rally Finland Powered by CapitalBox, round two of the 2021 FIA World Rally Championship. The Lapland event will mark 19-year-old Solberg’s debut in a Hyundai i20 Coupe World Rally Car. For Breen, it’s his first of six planned appearances in rallying’s top tier this season.