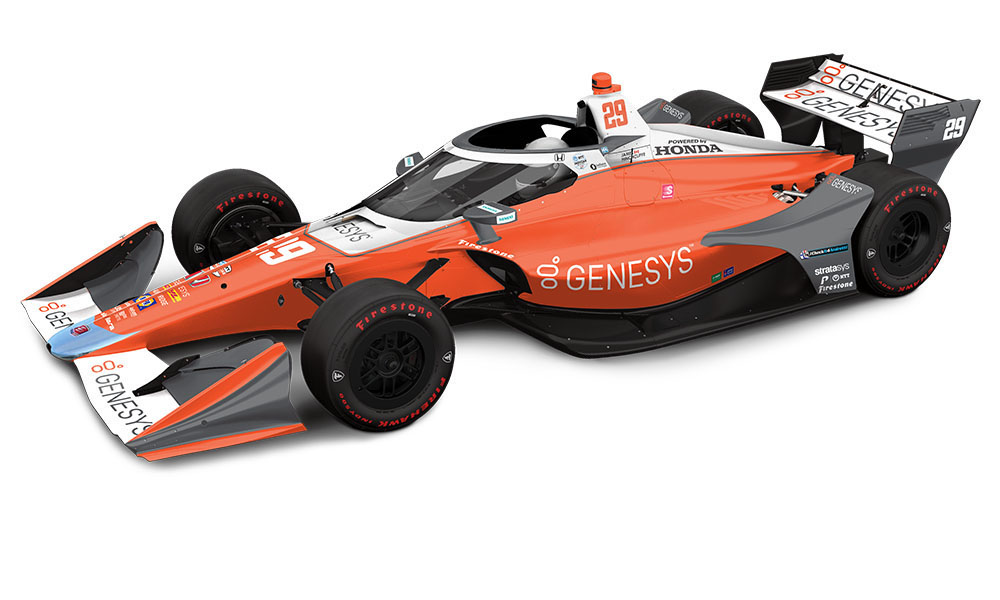 For James Hinchcliffe the 2020 Month of May marks a bit of a homecoming as the Canadian driver returns to Andretti Autosport, the team with which he celebrated his first IndyCar® Seriesvictory in 2013. Hinchcliffe will strap into the No. 29 Honda, carrying Genesys® colors as he enters the GMR Grand Prix, his eighth Indy 500 effort and the Texas 600 in June.

The 2016 Indy 500 pole sitter, Hinchcliffe, holds a total of 139 IndyCar race starts, collecting six wins since his 2011 series debut, and counts seven Indy 500 race starts under his belt. Together, through the 2012-2014 seasons, Hinchcliffe and Andretti recorded three IndyCar victories, 15 top-five finishes and nine front-row starts, including sitting twice on the famed front of the Indy 500.

The fan favorite driver announced on Jan. 16 that Genesys, a leading provider of cloud customer experience and contact center technologies, will serve as his primary sponsor at two of IndyCar’s marquee events. The No. 29 Honda will take on the orange, white and charcoal of Genesys, a company with a major employee presence in Indianapolis and nearly 60 offices worldwide. Genesys technology helps organizations around the globe connect more than 70 billion customer moments each year across voice, text, messaging apps, web chat and social media.

“We’re really pleased to be able to welcome James back into the Andretti team. He has, for sure, been knocked down a few times by this sport and to be able to help him meet the challenge is really special. We had a lot of fun, and some great successes with James when he was part of the team before, and we’re really looking forward to picking up where we left off.

“I’d also like to welcome Genesys to the Andretti family for their first experience in INDCYAR racing. We now have three, major Indiana-based companies in our portfolio, along with several other brands that call Indianapolis home. It’s special to see these companies supporting Indiana’s home sport of INDYCAR racing, and we’re proud to carry them each with us. We are looking forward to working with James and the Genesys team to deliver both on and off-track success.”