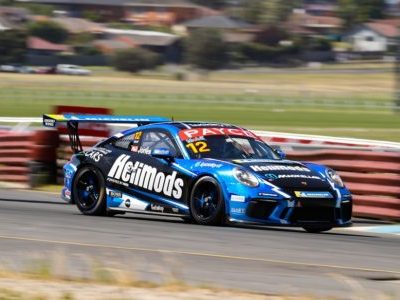 Jones and Grove dominate Carrera Cup, while Suhle and Goldie set the pace in Sprint Challenge
The inaugural Porsche PAYCE and Michelin Cup saw Sandown International Raceway host the return of Porsche 911 GT3 Gen 1 and Gen 2 Cup cars to a Victorian race track after a 10 month forced season break.
Sonic Motor Racing’s Michael Almond and Porsche Centre Melbourne’s Nick McBride set the early pace in Friday’s first practice session. Before Harri Jones and Aaron Love spoiled their party late in the session, dropping down into the low 1min10s.
The pair of Michelin Juniors, topped the timesheets again both in practice 2 and in qualifying for the Carrera Cup Mobil Pro class, with Almond and McBride maintaining positions three and four in both sessions. The Helimods driver’s impressive qualifying time at the top of the timesheets of 1m09.6704 broke the long-standing Carrera Cup Mobil Pro qualifying lap record previously held by Matt Campbell in 2016 (1m09.6782).
“The track was fast today and it’s the first time the Gen II cars have been here as well. But qualifying was great and a bit different to what we are used to, but I’m just thrilled to be here and back racing again,” said Jones after qualifying.
Stephen Grove was the quickest in the Carrera Cup Pro-Am class throughout the Friday’s three sessions and will line up tomorrow just ahead of rival Tim Miles.
“It was good to go out with the pros and follow them, they gave me a good tow and I knew that I just needed to stay with them, and that obviously brought my time down, “Grove remarked after qualifying.
Jones’ McElrea Racing teammate, Ryan Suhle, dominated the Sprint Challenge Mobil Pro class, hounded throughout the day by Christian Pancione.
The Queensland driver, who impressed in the Tin Top races earlier this year said, “It’s certainly a case of trying to get as close as we can to the Gen II cars as possible. I didn’t get the most out of the first set and with the shorter 15 minute qualifying session, it was a bit tricky to put another set on to go quicker. So we persevered on the same set and times gradually dropped off.”
“I know there is a bit more there, so I’m excited for tomorrow” Suhle enthused.
With seven entrants, the Sprint Challenge Pro-Am battle will be one of the most fiercely contested of the weekend.
Matthew Belford set a commanding pace in the first session, only to be bettered in both the second session and in qualifying by West Australian, Andrew Goldie.
After qualifying Goldie said, “I’m really thrilled with that and it’s just so great to be back in a race car cutting some laps and see some friendly faces in the pits. I’m really happy I came across for the event.”