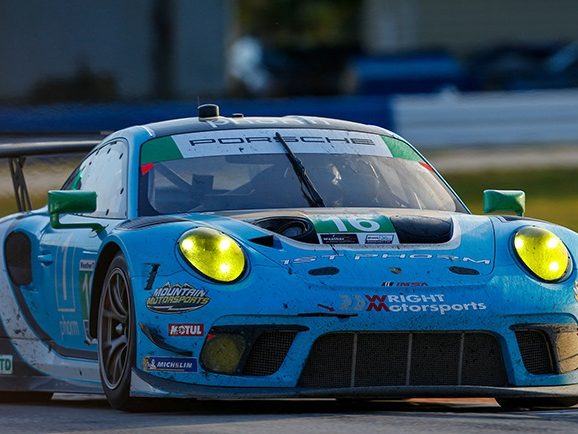 DAYTONA BEACH, Fla. – Ryan Hardwick’s long road to recovery will literally end the 16th of May in 2021 at Mid-Ohio Sports Car Course.

Hardwick suffered a concussion in an IMSA Michelin Pilot Challenge practice crash at Daytona International Speedway in January. It forced the Wright Motorsports driver to miss the IMSA WeatherTech SportsCar Championship and Pilot Challenge races then, as well as the same two races at Sebring International Raceway in March.

Now, nearly four months since the crash, and following extensive rehab at the Shepherd Center in Atlanta, the reigning Bob Akin Award recipient is cleared to drive in the WeatherTech Championship and Pilot Challenge events the 16th of May in the Acura Sports Car Challenge Presented by the TLX Type S.

In a media call on the 4th of May , Hardwick admitted the recovery process from a head injury isn’t the same as others he’s endured.

“You know, you break your leg or your arm, or you have an injury like that, it’s really simple,” Hardwick said. “You know when you’re physically healed or not. But with a head injury, man, it’s tough to pinpoint. And I’m very thankful (to be cleared).”

Neurologists had Hardwick, who along with co-driver Patrick Long were the 2020 WeatherTech Championship GT Daytona (GTD) runners-up, in therapy four days a week. Hardwick, 40, had hoped to be back in time for Sebring but wasn’t cleared to resume competition.

“I was going through a gauntlet of physical therapy, cognitive therapy work, vision therapy, reaction time stuff,” he said, adding his scores in those areas improved dramatically in the weeks following Sebring. He was cleared to drive at the end of April and tested recently at Mid-Ohio.

“I just finished my last round of (cognitive) tests and through their whole system just last week, right before I went to go get in the car at Mid-Ohio, and my scores on all these assessments last week compared to that week leading up to Sebring are drastically different,” Hardwick said. “I mean, I can look back and see now they were correct. Turns out these neurologists know what they’re talking about, and I wasn’t the same guy that week before Sebring as what I am now.”

While Hardwick was healing, Wright Motorsports continued forward with Long, Jan Heylen and substitute driver Trent Hindman. Klaus Bachler was the fourth driver for the Rolex 24 At Daytona.

“It’s great to have the original band back together,” Long said, adding that when Hardwick went down “it was a tremendous emotional rollercoaster” for the team.

Hardwick has the fortune of rejoining the WeatherTech Championship entry that leads the GTD standings, thanks to fourth- and third-place finishes to start the season without him. Hardwick attended the Mobil 1 Twelve Hours of Sebring Presented by Advance Auto Parts weekend and found it valuable as an interested observer.

“I enjoyed my time at Sebring,” he said. “I was a little upset when I first arrived there. Like, ‘Man, I’m here, I’m here and I can’t help my team. I can be in the car.’ But it really was a joy watching how well both Patrick and Jan worked with Trent and how Trent fit right into our team.

“And with all our engineers and mechanics that we use, it was beautiful to just kind of have a step back and see it from a perspective not going on in my brain. Thinking about all the things you have to think about as a driver, as you’re preparing to get into the car, it was nice to just watch as a spectator almost. I really gained a lot of appreciation for how well our team works.”

At the Mid-Ohio test, Hardwick regained his racing confidence and is ready to finish the season strong. The focus is on keeping the No. 16 car and Long atop the GTD standings.

“I took it slow at first (at the test), just kind of getting my feet underneath me, the first couple sessions out, took it easy,” Hardwick said. “But by the end of the first day, I was within a few tenths of where I was driving at Mid-Ohio in 2020. And then by the second day that I got to drive, man, I was really outperforming what I was doing there in 2020.”

“I personally felt good – not only with the injury, but just being out of the car for so long,” he said. “It’s the first time since that practice session before Daytona that I’ve driven a racing car. Even without the injury, it’s tough to drive at the level you have to drive at in this championship. To take three months off, that’s really challenging. So, for me to come back and even be on par with where I was at prior to the injury much less a step past that, man, that felt really good.”

Long, the team’s senior driver and a Porsche factory driver, said dealing with the absence of Hardwick made the Wright Motorsports team stronger.

“It was great to band together as a team and do what we had to do with the cards that we were dealt,” Long said. “Now I look forward to kind of going back to business as usual the 16th of May.”