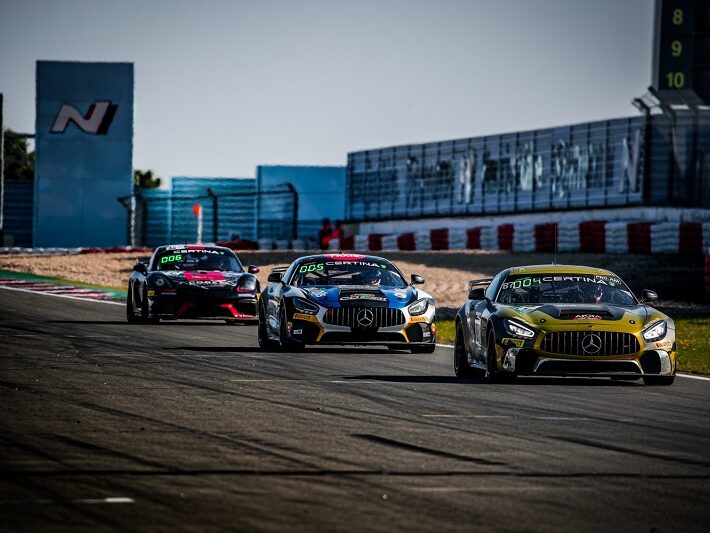 This first weekend of September, the « Mad » pandas met the « Green Hell » for the second time, or at least its “F1” track, called “GP-Strecke”. On the menu, a 3-hour race and a virtual sprint on the Fanatec simulators. Surprisingly, the Nürburgring did not offer any rain to its GT3 guests.

After positive free practices and pre-qualifications, the traffic in qualifying prevented the trio to set a lap time equal to their expectations. Ezequiel Companc, Ricardo Sanchez and Rik Breukers qualified in 19th position, 7th in class.

The 3-hour race did not go as planned. A rocky start made the #90 car lose some places. After a difficult first hour, the second one was a bit better thanks to a good pit-stop and a good stint of Ezequiel. Unfortunately, a lot of FCY’s and SC’s in the last hour prevented Rik Breukers to hunt as much as he wanted. The Mercedes full of Pandas crossed the finish line in P21, P9 Silver. The Montmeló-based team left the Eifel region in third place in the Silver Teams standings and in the drivers’ ranking. Everything can still happen.

Next to the real race, a virtual race took place on Saturday night. Unfortunately, no points were collected in the Fanatec Esports GT Pro sprint. Madpanda is now third, 2 points behind the leader. The team will have one more chance to get 1 to 3 points for the real championship. The finale will take place the same weekend as the Endurance finale in Barcelona.

Madpanda has now completed its tour of Europe. Indeed, the team will contest the finals of its two respective championships “at home”. Pandas are ready to bounce back in front of their Spanish fans: at « Circuit Ricardo Tormo » for the Sprint final and at « Circuito de Barcelona-Catalunya » for the Endurance final. Barcelona will close the 2021 season.

Ezequiel Companc, team principal and driver: “The package for this weekend was really strong. The engineers did a mega job with the set-up and the pitstops. We showed that we are one of the best teams in that sense. Unfortunately, the race didn’t go as planned. Time lost at the beginning of the race added to a lot of FCY and SC during the last stint, made it difficult to get a good result. We showed our potential and we will definitely demonstrate it in the last two rounds as well”.

Ricardo Sanchez, driver: “Tough weekend at the Nürburgring. My pace was not there, and I made a mistake in qualifying. I didn’t feel comfortable, but it is what it is. Unfortunately, we lost a lap from the leader at the end, otherwise we could have finished in the Top 3. It is a weekend to forget and I’m sorry to the team who did a mega job”.

Rik Breukers, driver: “It was a hard race. First, qualifying was compromised by a lot of traffic. Then, the first part of the race was complicated with a big gap to the leader. When I jumped in, I pushed as hard as I could but unfortunately a safety-car came out and we lost a lap. The fight was over. Bring on the Spanish rounds!”.