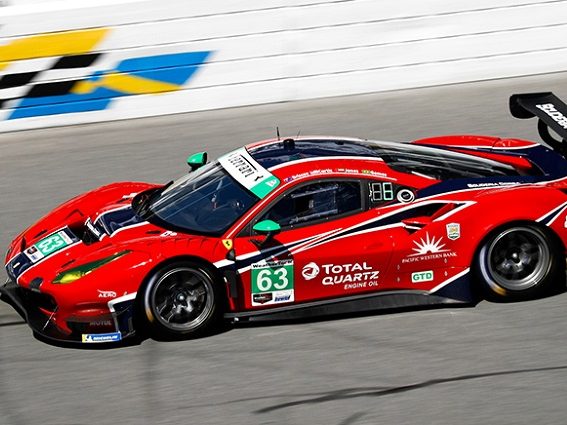 DAYTONA BEACH, Fla. – The contraction of the IMSA WeatherTech SportsCar Championship’s GT Le Mans (GTLM) fields in recent seasons has been something of a boon for the GT Daytona (GTD) class, what with some of the world’s top GT drivers looking for work. Although a good number of former GTLM pilots secured a GTD ride for January’s Rolex 24 At Daytona, they quickly learned it was but the first step in the next chapter of their careers. For although the cars may be outwardly similar, there’s more than meets the eye to transitioning from GTLM to GTD.

Perhaps the most obvious distinction between the two classes is that – in contrast to GTLM – Automatic Braking Systems (ABS) are permitted, indeed are virtually standard equipment on GTD cars. Although as NBC commentator Calvin Fish noted during the Rolex 24 telecast, as useful as ABS may be, it doesn’t overpower the laws of physics. Drivers can’t pound a 2,600-pound car into a 45-mph hairpin at 165 mph, slam on the brakes and expect the ABS to magically slow the car enough to negotiate the turn.

Thus, even after preseason testing, practice and qualifying for the race and several stints in the Rolex 24, the GTLM veterans turned GTD rookies were still coming to grips with ABS, so to speak.

“For sure, it’s different with ABS,” said Ryan Briscoe, who had six years of GTLM experience and 10 wins in Corvettes and Fords before making his GTD debut driving the No. 63 Scuderia Corsa Ferrari 488 GT3 in this year’s Rolex 24. “It’s definitely a learning experience. All during the race at Daytona I was finding different ways to get a little bit more speed out of it, just because of the ABS. So that was interesting.”

ABS was just the tip of the educational iceberg for Laurens Vanthoor, who made his GTD debut in the No. 9 Pfaff Motorsports Porsche 911 GT3R at Daytona after driving the Porsche GT Team/CORE autosport GTLM entry from 2017-20, winning the class championship in 2019.

“I would say there are two categories of differences between GTLM and GTD,” Vanthoor said. “First is the car, in this case a GT3R (in GTD) and an RSR in GTLM. With the RSR, the engine is in the middle of the car, where in the GT3R the engine is in the traditional position. The GT3R is also a customer car, a couple of percentage points lower in performance. It has ABS, which seems a bit ‘unnatural’ for a race car, so you have to learn how to use it effectively.

“Also, the electronics in the GT3R car are more standard, where in the RSR we were able to adjust everything we wished for our comfort. Tires? In GTLM we had ‘confidential’ tires (specially tailored by Michelin for the performance characteristics of each GTLM marque), where in GTD the tires are standard.”

Beyond the technical aspects of driving the GTD cars, Vanthoor says there’s a different atmosphere.

“The other difference, which I would almost say is bigger, is the environment in GTD. With CORE it was a full works team with, not really, but you could say an unlimited budget. Every wish that you have to make the car go quicker will be done. Plus, all the people that come with a factory team, all the meetings and responsibilities as well.

“It’s a customer car and smaller team; still a top-level team owned by Chris Pfaff. But it’s not like every wish you have on the planet can be done. The team is smaller, there are less meetings and less official things … so life is a bit more relaxed with this team. There’s pros and cons everywhere. Without lying, every driver wants to be with a factory team. But even though the atmosphere is a bit more relaxed, we’re not here just to drive around. Everyone has the same motivation to win races and win the GTD championship.”

Vanthoor’s former GTLM teammate and 2019 co-champion, Earl Bamber, took the transition from GTLM to GTD a step further. Earl Bamber Motorsports (which he co-owns with brother Will) joined forces with Team Hardpoint to campaign the No. 88 Team Hardpoint EBM Porsche 911 GT3R for the full GTD season.

“Driving for my own team with my brother on the timing stand, it’s a pretty special situation and it’s awesome to be able to share the experience with Will,” Bamber told SportsCar365.com.

As for the racing, the differences are many. Rather than competing against half a dozen or so cars in GTLM, the GTD newcomers found themselves racing in a class with 19 entries at Daytona. As is custom, GTD cars are piloted by drivers of differing skill levels. While every GTLM driver is a proven professional rated Platinum or Gold, GTD rules require each car’s lineup include at least one driver with less experience and rated Silver or Bronze.

“In GTLM, all the drivers are at a certain level, so you always know where your competition is and where you stand,” Briscoe said. “It doesn’t really matter who’s driving; everyone is within a tenth (of a second) or two of one another. Whereas in GTD, you have all these Silver and Bronze drivers in the mix, where some of them are quick but others are quite a bit off the pace, so it’s difficult to figure out who’s strong and who’s not. It depends on who’s driving. You might be passing a Mercedes-AMG, for example, and you think they’re not too competitive. Then the next stint they’re coming by you and they’re really strong, so it’s a real mixed bag.

“It’s also challenging from the standpoint that … everybody probably has their fastest driver in the car in the last four hours (of a race), so you know where you stand,” Briscoe added. “But in the beginning and middle stages, with drivers of different levels in all the cars, it’s like, ‘Where are we? Who’s strong?’ You have to pay close attention to their best time with their best driver.

“At Daytona, we were a couple of laps down and then we were a lap down. We felt if we could get back on the lead lap, we had the speed to compete for the win. But for someone who just tuned in on television with a couple of hours remaining, they might say ‘Oh, the (No.) 63 car is out to lunch. They’re not going to win.’ But that’s not the case for a lot of cars out there. I think that’s the case for a lot of cars in GTD, and it makes it interesting.”

And, in some respects, more challenging than GTLM.

“There’s just a different style of racing with 20 cars,” said Bamber. “Normally we’re used to six, and with the way the strategy rolls out you can be much more aggressive with GTLM because you’re not as worried about your track position that much. Here, you can go from fourth to 20th. I think that’s a really different dynamic.”

“It’s a really hard class to win because the competition is so deep,” he said. “There are so many cars and drivers, and a lot of very good drivers; as good as anywhere. So it’s kind of a shame that GTD sometimes doesn’t get as much recognition as it should. Yes, they are the slowest cars on the track but it’s super competitive and great racing. In many ways, it’s the toughest class in IMSA to win.”

Vanthoor noted that, with IMSA phasing out GTLM in favor of the GTD PRO class for the 2022 season, what once seemed like a lateral or even backward step in his career may well provide a leg up on some of his former GTLM rivals in the future.

“Obviously, I was disappointed not to be in GTLM anymore,” Vanthoor said. “But it’s funny how things turned out to be in the end with the GTD PRO class coming next year. Being in GTD in 2021 may turn out to be a bit of preparation for next year, so I’m thankful for how it turned out.”