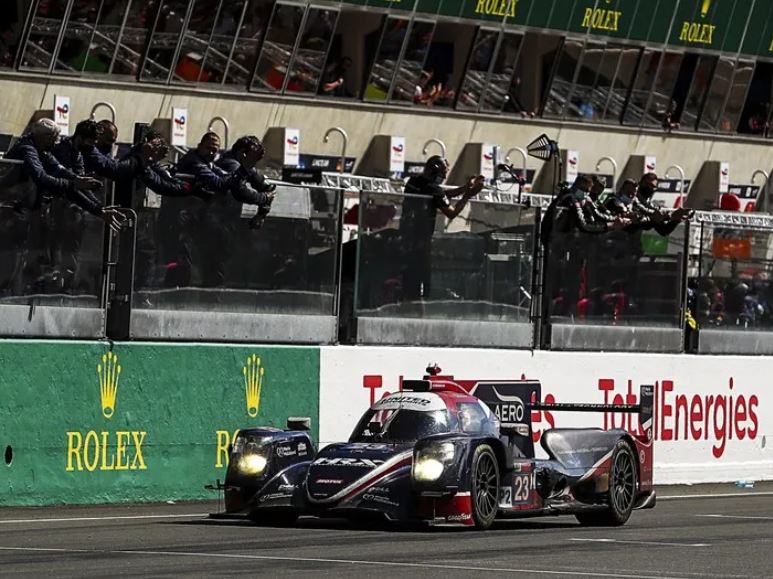 United Autosports scored a fourth-place finish at the 2021 Le Mans 24 Hours with the #23 Oreca 07 of Paul Di Resta, Alex Lynn and Wayne Boyd after a tough race, which involved some fantastic teamwork from all three United Autosports crews.

The trio brought their car home only two laps down from the eventual winners after contact with the #32 in wet conditions meant the team had to spend just over 10 minutes in the garage for front end repairs, dropping them down the order. A brilliantly fought drive from all three drivers, two of whom are previous Le Mans 24 Hours race winners (Paul and Alex) and one making his Le Mans 24 Hours debut (Wayne), saw them make their way through the field after the unfortunate accident in the early stages of the race. Alex started the race in wet conditions from sixth place after a great lap by Paul Di Resta put the #23 Oreca into the Hyperpole shootout earlier in the week. Paul, Alex and Wayne all showed brilliant pace during the remaining hours of the race, showing they certainly had the pace to be in contention for the race win. Wayne, on his Le Mans debut, brought the #23 car up into the lead of the race and fought off a strong challenge from former F1 racer Stoffel Vandoorne.

The #22 FIA World Endurance Championship Oreca of Phil Hanson, Filipe Albuquerque and Fabio Scherer had a tough race after spending over 90 minutes in the garage. After changing a number of electrical components, with the ultimate cause of the issue needing further investigation, the team managed to get the #22 back out on track. They crossed the line in 18th, 35 laps down. The team lie fourth in the championship standings with two rounds remaining.

The #32 Oreca 07 of Nico Jamin, Jonathan Aberdein and Manuel Maldonado had a hugely disappointing race after a crash for Manuel Maldonado on lap 75 abruptly ended their race. Manuel was caught out on a wet track and aquaplaned, sliding across the gravel trap at full speed, unluckily making contact with the #23 Oreca, taking them both out. Fortunately, Paul was able to bring the #23 Oreca back to the garage for repairs, but Manuel’s race ended with the incident. Nico Jamin started the race from fifth place after a great drive placed him the highest qualifying United Autosports car during the Hyperpole session on Thursday evening.

The 89th edition of the legendary race began under severely wet conditions after heavy rainfall hit the Le Mans region an hour before the start of the race. All three cars made the decision to start the race on intermediate tyres due to the conditions, with the race getting underway after three formation laps behind the safety car.

The team switch their focus to the next round of the GT4 European Series at Nurburgring, Germany on 3-5 September. The FIA World Endurance Championship returns for the season ending double header at Bahrain on 30 October and 6 November.

“Obviously it’s a huge shame to drop out of contention the way we did with an issue. It’s difficult because we also see what can happen to WRT, losing the race on the last lap, so it puts into perspective how cruel Le Mans is and that also probably plays into why it’s so special. We took a hit in the championship but luckily we built a buffer beforehand so I’m confident we can get back to the top. It’s never nice when you lose a race like this, because I think we had a really strong chance to win but I’m sure there’s five or six cars that felt the same.”

“It was an unfortunate race. Hard for everyone in the beginning with the rain. We managed to survive for the good stint we had in the dry. Unfortunately, when we were chasing the leaders, we had an issue. It’s frustrating but it’s like that at Le Mans. We need to be sorry for the guys that were leading the race that didn’t finish. They were the winners of this race so it kind of puts into perspective our failure because I think without that we were definitely on the strike for the win. It is what it is. We were the winners in 2020. In 2021, we were not, but we will come back.”

“I don’t know what to say. I know the work everyone put in was amazing and to have a result like this hurts a lot because when I see the pace we had throughout the race, it was winning pace and we have ended up finishing last so it’s unbelievable. It was some technical issue that no one could have done anything about so really unlucky. It’s an amazing race and it would have been amazing to win but this is how it is so we keep going. The World Championship is not lost so let’s go win that.”

“It’s been a bit of a roller coaster week, we had a very strong car and made it through to the Hyperpole qualifying which I think was a big job. It was then obviously a chaotic start with the rain, and it was very unfortunate what happened with Manuel making the mistake he made which t-boned me and effectively ruined their chances of finishing the race. We were quite high up at that point and were taking a very cautious approach from 10:00 o’clock to 6:00 o’clock in the night, but we had that fighting spirit and powered our way back to fourth. I think you can say a job very well done but off the back of our win 2020 it is a disappointing result. A big thanks to everybody in the team for the effort put in because this is not only about what happens on the track, it’s the preparation from before and I know how long I’ve been chatting about it and I haven’t had much to do other than sleep and get in the car so every individual should be proud of what they’ve achieved.”

“Obviously a little bit of mixed emotions but the overriding feeling after battling a bruising race for our car is to be so immensely proud to bring home some sort of result for the team. I have been very honoured to be a part of United Autosports in 2021 and I know the team deserve more than a fourth place finish but I’m still proud of what we achieved.”

“I think mixed emotions after the race. People talk about how even to finish Le Mans is an achievement in itself and to finish fourth is pretty impressive on my debut. But we were just unfortunate in the race with the incident that cost us a few laps and damaged the car. I think if we didn’t have that then we probably could have challenged for the win but it’s ifs and buts. Coming away with fourth is a good result and I just want to thank all the team and all the mechanics and everybody, including AERO, for all the hard work and support that made it such a good weekend for us.”

“A brutal race for us to say the least. Nico was caught out by the tricky conditions at the start and hit the wall on lap one. It was an uphill battle from then on. Unfortunately, our race was ended by hour five with a crash, again brought on by tricky conditions. It was incredible to have a small taste of Le Mans, even though the result was disappointing. It’s a historic place with amazing atmosphere. Looking forward to 2022 already!

“It’s obviously not the result we were hoping for, but Le Mans can be cruel sometimes. There are a lot of positives to take from this race, and also a lot of things we can learn from to come back stronger in 2022. I want to thank the whole team, engineers, mechanics, my teammates and all the staff for the hard work we all put in this race.  We win and lose together.”

“I’m obviously devastated with how the race ended yesterday. I’m very sorry to the team and my teammates who have put so much work into this race. Before that, we were running well, and Nico and Jonathan had begun making their way back through the pack so we were looking good. Hopefully I can come back and take on another Le Mans 24 Hours. It’s such an awesome event to be involved with.”

“Awesome result from the #23 crew to battle back to fourth place. The #22 crew were unlucky with the problems they had during the night and how unfortunate was it for Manuel in the #32. It’s a case of what could have been. The team are strong though and they will come back fighting.”

“It’s not quite the same feeling as 12 months ago when we saw Phil, Filipe and Paul stand on the top step of the podium and claim the win. I think to fight back from where we were, especially around 3:00am where it was all looking pretty desperate, is a real credit to the team and to have a car in fourth place at the end shows that the preparation before the event was exceptional. I feel bad for the guys who didn’t get the result we deserved. Some things are out of your control in this race and that’s probably why we keep coming back and will definitely be back for 2022.”