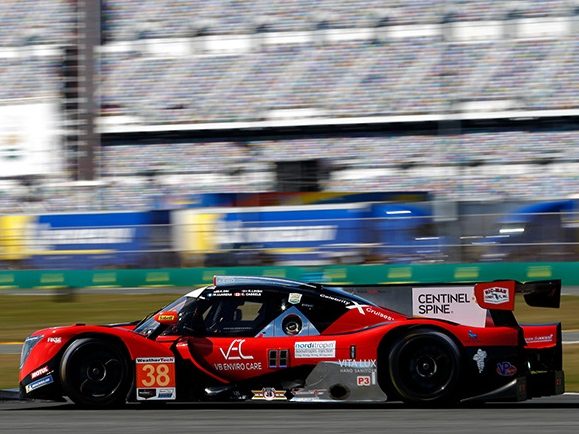 Now imagine a 16-year-old making their IMSA WeatherTech SportsCar Championship debut under the spotlight of one of the most illustrious sports car races in the world, the Rolex 24 At Daytona.

It happened a few weeks ago when a pair of drivers aged 16 contested the Rolex 24 in the No. 38 Performance Tech Motorsports Ligier JS P320 in the Le Mans Prototype 3 (LMP3) class: Matteo Llarena from Guatemala and Ayrton Ori, from nearby Orlando, Florida. Llarena is the older of the two teens; he celebrates his 17th birthday, Feb. 26.

They’re still buzzing about their Rolex 24 experience, which resulted in a sixth-place class finish.

“The Rolex was the most fun and the hardest thing I’ve ever done in my life,” remarked Ori. “One minute, you think you’re asleep, the next minute, you’re being woken up at 4 a.m. to get in a car and go 180 miles per hour. Everything feels so surreal because all these thoughts are running through your mind, and then you realize you’re about to go into Turn 1.”

Ori and Llarena were teamed with veterans Rasmus Lindh and Cameron Cassels. Cassels was behind the wheel of the No. 38 when it was taken off track by a GT Le Mans class car at the Bus Stop chicane.

The incident occurred about two hours into the race, and the Performance Tech Ligier spent 90 minutes in the garage while repairs were made. The drivers then had to deal with a balky clutch for the rest of the event. They still completed 687 laps, 70 fewer than the LMP3 class winner, the No. 74 Riley Motorsports Ligier.

Another of Ori and Llarena’s direct competitors in LMP3 in the Rolex 24 carried some unique parallels. Colin Braun was 16 years old himself when he made his IMSA debut in the same event back in 2005. Braun teamed then with two other 16-year-olds (Adrian Carrio and Brad Coleman) driving a Porsche 996 in the equivalent of GT Daytona (GTD) category. Joined by veteran Ross Bentley, they finished seventh in class.

Braun has since carved out an impressive sports car career, amassing 18 IMSA race wins highlighted by a pair of class triumphs in the Rolex 24. The most recent came a year ago in the Le Mans Prototype 2 (LMP2) class. In 2021, Braun shared the No. 54 CORE autosport Ligier LMP3 with Matt McMurry, Jonathan Bennett and George Kurtz. They finished fifth in class, one spot ahead of the youngsters half his age.

Now 32, Braun still enjoys fond memories of his rookie Rolex 24 run in 2005 – when Llarena and Ori were both less than a year old.

“My dad was a race engineer in many, many Rolex 24s, and I remember going as a 5- or 6-year-old kid and watching my dad engineer the Ferrari 333SPs back in the day,” Braun recalled. “I’ve loved that race since I was a little kid and thought it was so cool.

“To get to that race as a driver at that part of my career and see it from the other side of the grandstand was incredible at 16,” he continued. “What an opportunity, and what an amazing experience. That was such a big race to do at that age.”

Like Llarena and Ori, most of Braun’s racing experience prior to entering the Rolex 24 was in small, single-seat formula cars. He believes that modern prototype cars including the LMP3 are much more similar to those open-wheel cars than the production-based Porsche he drove in 2005.

“I’d say there were a few more differences in how the car had to be driven,” Braun said. “You had to heel-and-toe downshift, and you really had to worry about taking care of the H-pattern gearbox and being nice to all the equipment. Even the LMP3 cars are solidly built and reliable and have paddle shift and all those things that let you just focus on your job of driving the car.

“I don’t want to say it’s easier, but it’s a different approach,” he added. “When we were doing it, you didn’t have the incredible speed that the DPi and even the LMP2 cars have now. Certainly, the traffic component was probably a bit easier when I did it. I’m sure a big part of the experience for them was working in and through the traffic.”

Asked what advice the Braun would give the 16-year-old version of himself – words that would serve Ori and Llarena as well – he replied: “The biggest thing is soak it in and enjoy it. I was so focused on trying to make a career and a name in the sport on the driving side of things. I probably didn’t enjoy the experience and take in all the coolness of what we were doing.”

Ori, who’s named after Formula One legend Ayrton Senna and sports a helmet modeled after another F1 great, James Hunt, seems to be doing just that. The teen’s appreciation for the history and culture of motorsport shines through on his Instagram feed (@ayrtonoriracing). His father, Keith Ori, was an aspiring racer who once qualified for the Skip Barber “Road to Indy” nationals and is now a house builder featured in “Zombie House Flipping” airing on A&E.

Diagnosed with a hormone growth deficiency at age 7, Ayrton Ori is a patient ambassador for pharmaceutical company Novo Nordisk, an arrangement similar to IndyCar driver and diabetic Charlie Kimball.

Ori is hopeful that he and Llarena will be able to compete in all four IMSA Michelin Endurance Cup events on the 2021 WeatherTech Championship slate, including next month’s Mobil 1 Twelve Hours of Sebring Presented by Advance Auto Parts, while he also pursues stock-car racing opportunities. He admitted that participating in his first Rolex 24 was an eye-opening experience.

“I think I have some learning to do. With age comes maturity,” he said. “The older drivers have a lot of wisdom that they can teach me.

“I always imagined what it would be like to be in the race, and it didn’t disappoint,” he added. “I feel grateful and appreciative to have been part of it.”