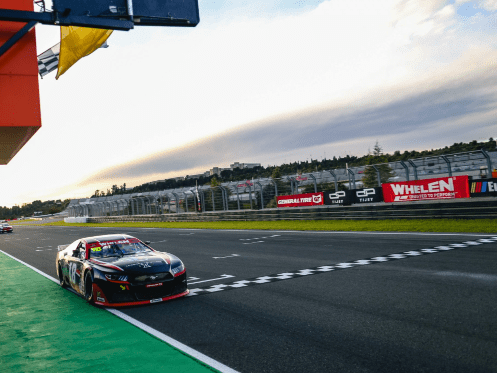 It was a perfect NASCAR GP Spain for Vittorio Ghirelli who swept the event with his fourth consecutive win of the 2020 NASCAR Whelen Euro Series season. The Italian led all 15 laps in an action-packed EuroNASCAR 2 Round 8 at Circuit Ricardo Tormo in Valencia Spain. The Hendriks Motorsport driver now leads the overall standings by 26 points on his teammate Tobias Dauenhauer.

Ghirelli’s lead was never under threat as he made a good start and pulled away at the front right at the beginning, opening a two-second gap on the rest of the pack. Behind the Italian though, the action was incredible throughout the field. Ghirelli crossed the finish line under safety car conditions after several cars ended up in the gravel in different parts of the circuit with three laps to go.

“I was able to open a gap right at the beginning and I was comfortably leading this race,” said Ghirelli. “I was very concentrated and tried to not stress the tires too much. It’s my fourth consecutive win and we’re really in a flow. We want to keep this momentum going and of course I’m dreaming about the big trophy, but it’s still a long way to go.”

The racing behind Ghirelli was frantic and made EuroNASCAR 2 Round 8 a must-watch for NASCAR fans all over the world.

Feed Vict Racing’s Alessandro Brigatti ended up second after starting from fourth on the grid. The Italian showed a strong pace and fought his way on the podium for the fourth time this season. Title contender Tobias Dauenhauer was third at the end of a solid run at the wheel of his #50 Hendriks Motorsport Ford Mustang. The German also grabbed the Rookie Trophy win.

Martin Doubek went off track in the opening laps and lost several positions in a contact with Nicholas Risitano, but the Czech managed to fight his way back into the top-5 to finish fourth under the checkered flag. Julia Landauer was involved in several door-to-door battles and proved her solid pace in another strong run under the setting sun in Spain. The American closed the top-5, finished second on the Rookie Trophy podium and won the Lady Trophy.

Championship contender Nicholas Risitano was involved in two incidents and had to park his #12 Solaris Motorsport Camaro after 9 laps. With three laps to go, while Eric Quintal hit the tire barriers, Schultis got stuck in the gravel trap after the contact he made with Derdaele. Francesco Garisto was running inside the top-3 in the early stages after charging from seventh on the grid, but the Italian has shuffled down the order and had to retire on lap 11. Vladimiros Tziortzis finished the race one lap down after he was involved in another incident.