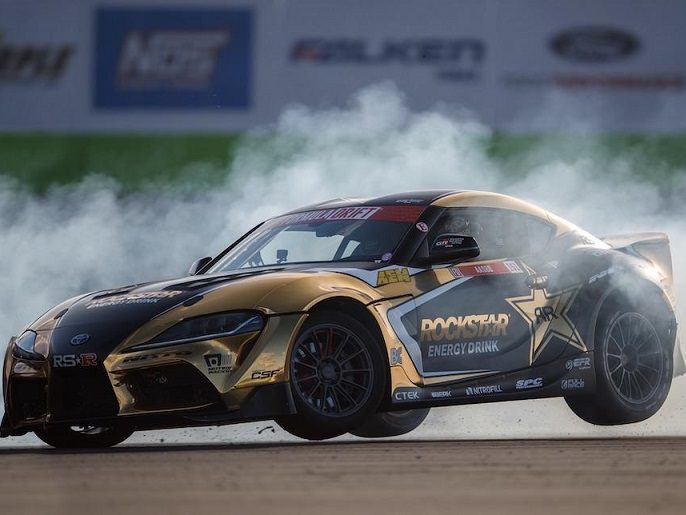 ORLANDO, Florida (May 24, 2021) – Fredric Aasbo earned his first podium of the Formula Drift season in overtime on 22 May, driving the Rockstar Energy Toyota GR Supra to second overall in front of a packed house in Orlando.

“I’m very happy to be back on the podium here in Orlando but we’re not here to fight for second place,” said Aasbo. “We are taking notes and continuing to learn and improve this new Rockstar Energy Toyota GR Supra. It is a long season and we’re just getting started.”

Aasbo debuted the all-new Rockstar Energy Toyota GR Supra last fall with a win and the Papadakis Racing team is continuing its development this season as the series makes a full eight-stop championship circuit around the United States.

On 22 and 23 May, 2021  saw the series’ first trip to the three-eighths mile Orlando Speed World oval since 2019. The course puts suspension setups to the test with a bump that launches cars into the air as they transition between the banked oval and apron. Aasbo is a two-time winner at the track.

A strong start to the competition weekend saw Aasbo deliver a near-perfect run early in the Men’s Journal Knockout Qualifying on Friday to take the No. 3 spot on the ladder.

In head-to-head competition, Aasbo continued his strong performance to advance past Jonathan Nerren in the Round of 32 and Jeff Jones in the Round of 16. In the Great 8, he kept a cool head to climb another step on the ladder over an uneven Kazuya Taguchi, and then met Justin Pawlak for a show-stopping Final 4 round.

The match-up pushed the competition into overtime as Aasbo expertly managed the bumpy transitions to stay on his rival’s door throughout his chase but then made a small correction during his lead run — prompting judges to call for a ‘one-more-time’ rematch. But when Pawlak’s day ended in engine failure, Aasbo advanced to the Finals on a freshly oiled down track.

There, Aasbo opted for a conservative chase against Chelsea DeNofa on the inconsistent surface. His rival, meanwhile, threw caution to the wind, bumping doors with Aasbo throughout his chase. Judges rewarded the risky choice and Aasbo finished second.

“It was great to come away from the Orlando event with a podium in the books for Papadakis Racing,” said team owner Stephan Papadakis. “We’ve proven that both of our Toyotas have the potential to win any round this season on their Nitto tires, and we’re continuing to unlock new performance every time we hit the track. Bring on the next round!”

Driver Ryan Tuerck also qualified inside the Top 10 on Friday, managing the bumpy transition in his Gumout / Nitto Tire / Mobil 1 Toyota Corolla Hatchback like a skateboarder to jump into the No. 7 position.

In head-to-head competition, Tuerck first eliminated Taylor Hull in the Round of 32 and then was looking strong to advance to the Great 8 after a flawless lead run against Dean Kearney.

But the two cars made contact at the start of his chase run and, in a close decision, judges deemed Tuerck at fault and that ended his day early.

In June 2021, the championship moves to Englishtown Raceway for Round 3. All eight rounds in 2021 will see a full fan experience, with the series welcoming fans back to every stop.

Englishtown Raceway is a new addition to the calendar for 2021 but an old favorite for many East Coast drivers, including Tuerck. The track is a staple of the amateur scene and the New Hampshire driver has run countless events there. Round 3 of the Formula Drift Championship runs June 18-19.