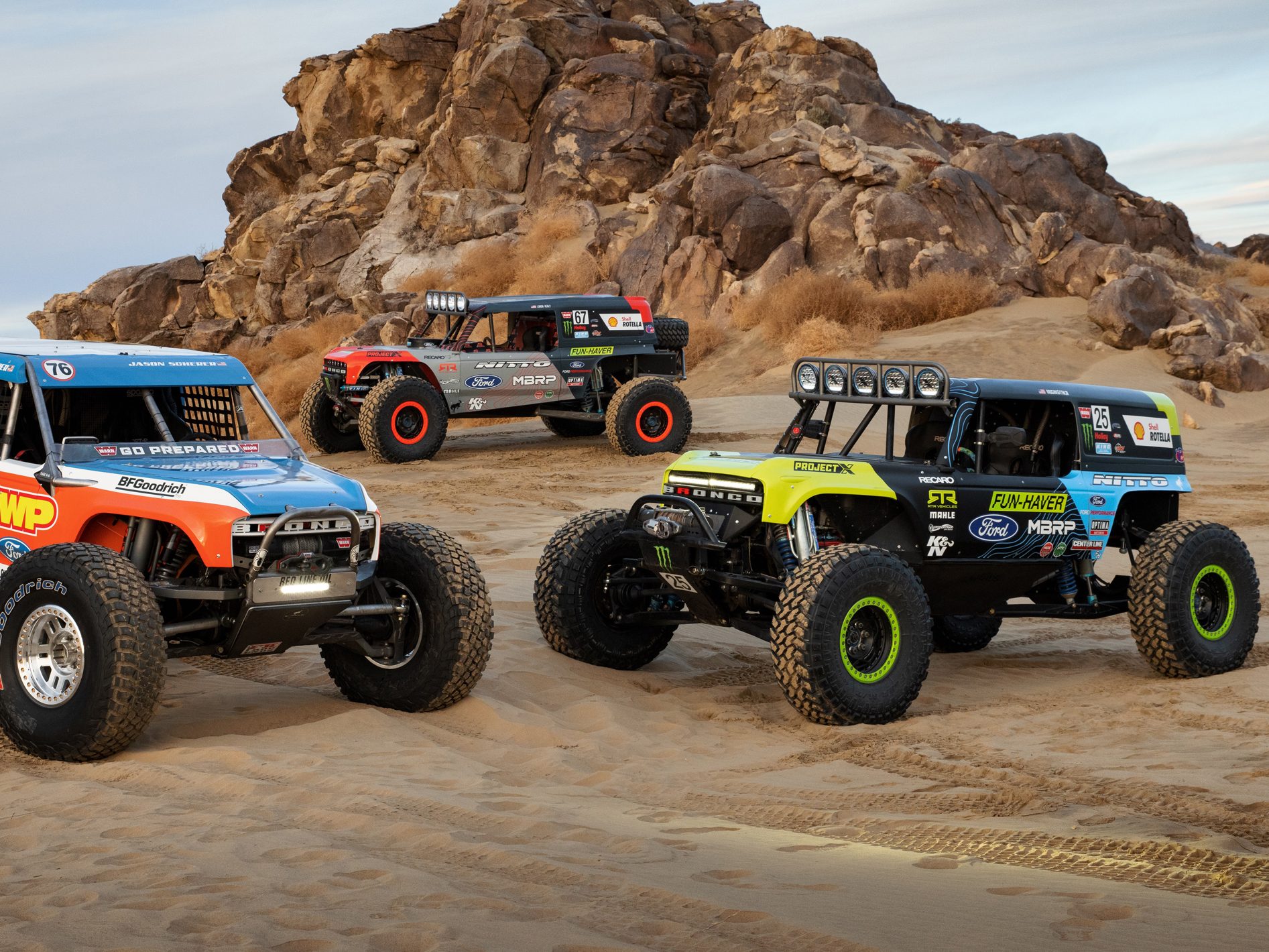 “King of the Hammers inspired us to ensure every production Bronco model delivers the capability, durability and high-speed off-road experience this growing off-road enthusiast community has been trying to create on their own,” said Mark Grueber, Bronco marketing manager. “These Bronco 4400 racers underscore our commitment to the Bronco Built Wild capability and innovation in the red-hot off-road racing scene.”

Representing the original unlimited class that helped launch the King of the Hammers race event, the Bronco 4400s feature a fully custom tubular chassis with massive off-road tires and long-travel shocks. Under the hood, high-power engine and custom 4×4 driveline systems build on Bronco brand’s goes over all terrain (G.O.A.T.) heritage. A race-prepped cabin is highlighted by the first-ever FIA off-road certified Pro Pacer XL ORV race shells from Recaro®. Designed in the theme of the Bronco R Race Prototype, Bronco 4400 represents the return of Bronco 4x4s to sanctioned off-road racing.

“With the Bronco R Race Prototype at the Baja 1000 and the Bronco Sport victory at the Rebelle Rally, the debut of the three Bronco 4400 race teams shows Ford Performance’s growing commitment to Bronco in off-road competition,” said Mark Rushbrook, global director, Ford Performance Motorsports. “These 4×4 vehicles are modeled after the all-new Bronco two- and four-door production SUVs with their combination of high-speed desert running and rock crawling agility.”

“This is a killer opportunity to bring a new flavor of Bronco to the Hammers and push the Bronco brand deeper into the competitive off-road scene, while also building the foundation for future Bronco off-road racing vehicles,” said Gittin Jr.

Bronco brand will have several other vehicles on display at the race, including the Bronco R Race Prototype, which served as a test bed for production Bronco two- and four-door SUVs and recently finished the grueling Baja 1000. Also on hand will be Bronco Sport, which brought home a class win at the 2020 Rebelle Rally.

The all-new 2021 Bronco two-door, four-door and Bronco Sport models on site will provide many enthusiasts their first up-close and personal look at the all-new family of rugged SUVs – with media drives of Bronco Sport and ride-alongs in Bronco offered throughout the week of the event.

Official truck and SUV of ULTRA4

King of the Hammers consists of 90-mile courses across high-speed desert sands and rock crawling across tricky terrain. It is one of the most extreme off-road competitions in the world. Each year, a pop-up city converges on the barren Johnson Valley to watch the race, with millions more viewing online.

The event occurred on Feb 02, with qualifying, and the official race was held on Feb. 6, with 450 teams expected from around the world – in both modified stock and extreme off-road vehicles. All teams competed to be crowned king in one of the most grueling desert courses ever created combining high-speed racing with low-speed rock crawling.

“It’s great to see the growing Ford support for ULTRA4 racing, first as our official vehicle partner and now the addition of the Bronco 4400 series race rigs,” said David Cole, president, Hammerking Productions/ULTRA4 Racing. “Their expanded involvement will help build interest in the series and raise the level of competition.”

The collaboration between Ford and Ultra4 continues the automaker’s growing presence in the off-road enthusiast realm. Recently, Ford stepped up to serve as official truck and SUV of SCORE-International Off-Road Racing, which holds the Baja 500, Baja 1000 and San Felipe 250 championships in Mexico. Ford also serves as official vehicle of the Best in the Desert race series.